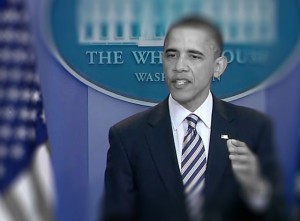 With National Guard now stationed in Ferguson, Missouri as the riots and protests there continue over the shooting death of an unarmed teen by police, Obama held a press conference where he said that citizens carrying guns undermines justice (Via the Chicago Tribune):

“While I understand the passions and the anger that arise over the death of Michael Brown, giving in to that anger by looting or carrying guns, and even attacking the police, only serves to raise tensions and stir chaos,” Obama told a news conference. “It undermines, rather than advancing, justice.”

Remember that game on Sesame Street? “Which of these things is not like the other…”

The president mentioned looting, carrying guns and attacking the police. But these three things aren’t all the same. Two of these things are crimes. One of them is not.

In fact, there are no Missouri state permit requirements for the purchase of a rifle, shotgun or handgun, and there are no state licensing requirements to possess these guns, either. Concealed carry is legal in the state with a valid endorsement or permit.

Live feeds from Ferguson have already shown shop owners protecting their stores by standing guard at the entrances with guns; some shops that haven’t been looted or destroyed have actually been saved because of guns.

It’s called the 2nd Amendment of the Bill of Rights, something we still have in this country.

Beyond that, it’s sad and ironic that our president would even use the tragedy and subsequent fallout in Ferguson as an excuse to demonize guns in the hands of civilians, when the dead teen everyone is protesting over here was completely unarmed and shot at least six times by a police officer, including two shots to the head.

So, according to Obama, a town that is angrily protesting what they feel is a shooting murder at the hands of the police of an unarmed teenager should just give up all their guns altogether…so that the only people who have guns in that town are those same police?

Why would anyone in Ferguson want to be able to personally protect themselves? It’s not like the police are driving down city streets in mine resistant, ambush protected tanks straight off the battlefields of Afghanistan, equipped with .50 cals, LRAD weapons, tear gas, and rubber bullets or anything…