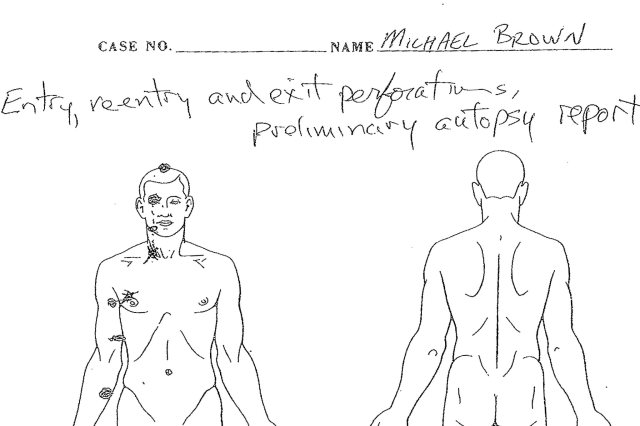 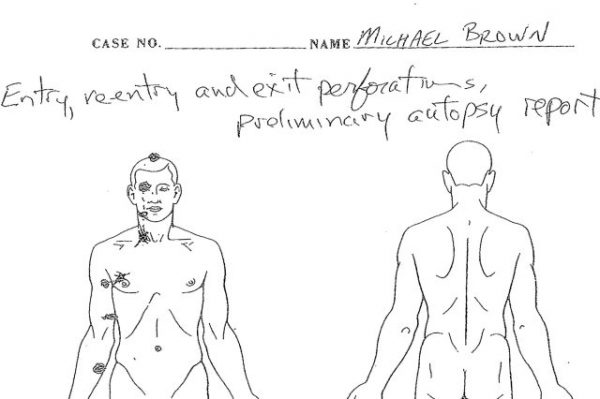 Shawn Parcells Did.  Who Dat You Say? Well Let Me Do some splainin.

I’ve added some additional copy. Seems reporter pictured above is a bigger part of story then I gave her credit for. Shucks as you can see by the above tweet she was playing with Crump way back when St. Trayvon was Canonized.

FERGUSON, Mo. — Michael Brown, the unarmed black teenager who was killed by a police officer, sparking protests around the nation, was shot at least six times, including twice in the head, a preliminary private autopsy performed on Sunday found.

One of the bullets entered the top of Mr. Brown’s skull, suggesting his head was bent forward when it struck him and caused a fatal injury, according to Dr. Michael M. Baden, the former chief medical examiner for the City of New York, who flew to Missouri on Sunday at the family’s request to conduct the separate autopsy. It was likely the last of bullets to hit him, he said.

“You do this for the families,” Mr. Parcells said.

The two medical experts conducted the four-hour examination Sunday at the Austin A. Layne Mortuary in St. Louis. Benjamin L. Crump, a lawyer for Mr. Brown’s family who paid their travel expenses, hired them.  (link)

Reading this article by Frances Robles would give you the impression Dr. Michael M. Baden actually “conducted” the autopsy on 8/17/14.

Alas a review of the timeline shows a divergent reality.   The Scheme Team are up to their old tricks.

2) Fri Aug 15 – Daryl Parks gave a press conference sharing his disgust the Ferguson Police had release the strong arm robbery footage.   During the presser he told the media that their 2nd independent autopsy had already been performed (citation link)

Knowing they were going to bring in Dr. Baden, that’s why when questioned about the second autopsy Parks said:

…”IT’S DONE, AND WE’LL TALK ABOUT THAT LATER, WE’RE NOT ANSWERING ANY QUESTIONS ABOUT THE 2ND AUTOPSY AT THIS TIME; WE WILL -IN TIME- DO THAT”….

If Parcells was just supposed to be assisting Baden, why was Parks stating that the autopsy had already been performed two days before Baden was even flown in?

The actual truth appears to be – a rather controversial person Shawn Parcells, who is NOT a forensic pathologist, was used by the Scheme Team to conduct an autopsy – and then Professor Baden was brought in AFTER to meet with Parcells and give his OPINION of it.

In essence lend his credibility toward it.

Shawn Parcells is not a pathologist,  he is a voice for hire.  Here’s some articles on the lack of credentials for Parcells and the concerns therein:

“[…]  some coroners and medical examiners in Missouri say Parcells has inflated his qualifications and performed autopsies without a medical license. Others allege that doctors whose signatures were on some autopsy reports were not present at the autopsies, did not review the work or never actually signed the documents.”

“Police in Andrew County are looking into allegations that a pathologist Parcells listed on a 2012 autopsy was never consulted.”

“Shramek said he became alarmed when Parcells asked what to put down as the cause of death on an autopsy report instead of following the evidence.”

“Others, such as Dr. Mary Case, the medical examiner for St. Louis, St. Charles, Franklin and Jefferson counties, have been outspoken about the allegations against Parcells.

“It’s very bad for our state if there’s someone doing autopsies without a medical license,” she said. “This is a huge atrocity, an invitation to disaster, and it needs to stop.”   (link)

The bottom line is that Dr. Michael M. Baden never performed an autopsy on Mike Brown.  Instead he signed off on an opinion of a forensic examination completed by a controversial Forensic Pathologist Assistant, who did an evaluation of Mike Brown’s body at the request of the Scheme Team.

Dr. Baden was flown in later to review the findings of the Forensic Pathologist Assistant, Shawn Parcells, and give it credibility in the eyes of a non-questioning media.

The Scheme Team then took Dr. Baden’s evaluation of the Shawn Parcell review, and handed it off to their New York Times friend and cohort, Frances Robles.  Selling it as if Dr. Baden had actually conducted the physical exam himself.

Frances worked with the Scheme Team in 2012 while she was at the Miami Herald and was part of their inner circle of media types willing to sell the Trayvon Story.   The Trayvon Martin Story was also full of similarly false and manufactured media evidence.

The Rest From  Here

Steve’s post first appeared at Fellowship of the Minds.