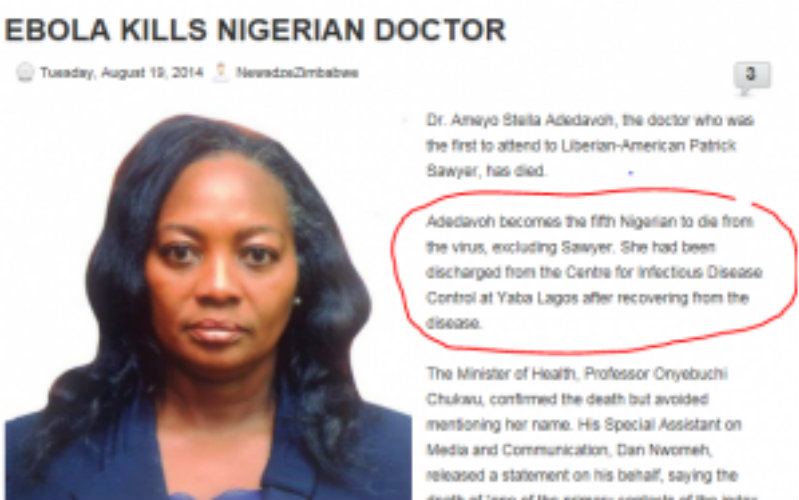 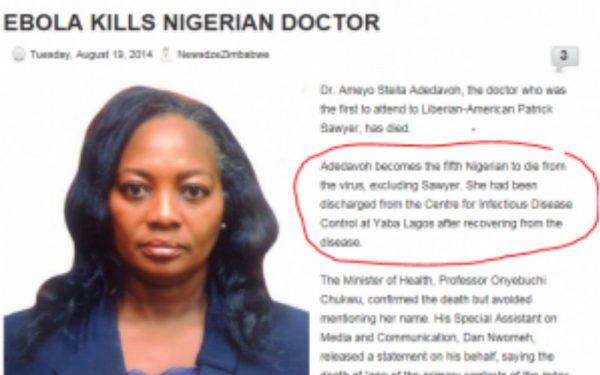 What the circled area says is:

Adedavoh becomes the fifth Nigerian to die from the virus, excluding Sawyer. She had been discharged from the Centre for Infectious Disease Control at Yaba Lagos after recovering from the disease.

The Minister of Health for Nigeria has confirmed the death as Ebola related. So, we have an apparently recovered patient who is discharged from medical care who then drops dead…apparently from Ebola. Has something changed in the virus that it re-emerges or is it a case that there was a false negative test result?

Ebola is unpredictable at the best of times, presenting a wide variety of symptoms, and incubating anywhere from two days to 21 days. As a virus Ebola is able to mutate and change just like any other replicator virus can, let’s hope that’s not the case.

If false negatives are possible maybe the test should be repeated on all patients before they are released back into the community. It also makes you wonder if any of the people who have tested negative around the world have Ebola in some form. The United states, Canada ,Austrailia, Spain, Kenya  and Scotland have all released patients who have had negative test results, and these are just ones that have made the news.

Two men, displaying suspected symptoms of the Ebola virus, ran away from a rural health center located in the Madinah province of Saudi Arabia on Sunday, a Saudi daily reported.

“The two African nationals, who did not have residency permits or any other documentation, came to see the doctor at the health center, complaining of difficulty breathing and bleeding while passing urine,” an official who requested anonymity told Arab News.

Medical officials were unable to conduct a thorough examination and confirm that the patients were infected with the Ebola virus as they ran away after being asked to produce their residency permits.

The doctor present had instructed the center to take the patients to a hospital with better facilities before the duo took off.

The matter was reported to police instantly, the source said.

The police are still searching for the patients, the report added.

The Health Affairs Directorate in Madinah said the patients were from East Africa, a region not affected by Ebola, although their precise nationality had not been identified.

The deadly Ebola virus, declared a public health emergency by the World Health Organisation (WHO), has killed over 1,140 people in West Africa and is spreading rampantly.

With The annual Hajj pilgrimage due to take place in early October, Saudi Arabia has made a big thing of banning those from Ebola hit countries from entering Saudi Arabia. It seems they have a good deal more work to do to ensure the safety of pilgrims from non-affected countries that choose to visit Mecca this year.