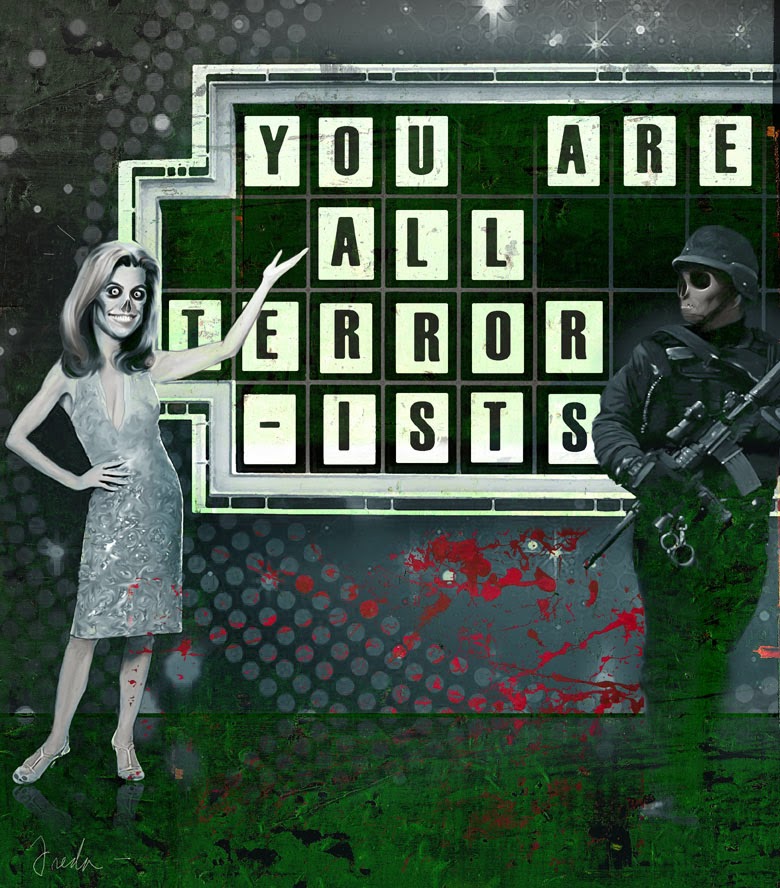 Thankfully, the dynamic duo of the Police State and the Nanny State come together again to protect the American people from another dangerous terrorist. This time, the danger to society was a 16-year-old boy from Summerville, S.C. who went so far as to write a fictional statement about killing a dinosaur with a gun.After being given an assignment to “write a few sentences about themselves” as if it were a Facebook status, Alex Stone proceeded to write a fictional story that included the words “gun” and “take care of business.” “I killed my neighbor’s pet dinosaur, and, then, in the next status I said I bought the gun to take care of the business,” Stone said. Unfortunately for Stone, after reading the status, his teacher became alarmed that a dinosaur had been harmed and, to make matters worse, an American citizen had access to a gun. Apparently, what was even more disturbing to the teacher was that this gun-wielding, dinosaur-murdering terrorist dared bring the word “gun” into the school and write it down on a piece of paper. The teacher certainly recognized that the amount of damage a written word can do to the general student body is incalculable. After all, it had just killed a dinosaur and now, here it is, in the middle of the school! After realizing that the power of the word “gun” was too much for a single teacher to handle, the teacher wisely called in the appropriate law enforcement officials who, having spent years building up surplus military gear, were trained to handle such a situation.

Summerville police wasted no time in responding to the epic emergency with such immense national security implications. After arriving at the school, police searched Stone’s book bag and locker but there was no sign of a gun or the body of the dinosaur. The word “gun,” however, presumably remained on the page where Stone had written it, although police had apparently subdued it and neutralized it as a threat. When Stone was asked about his reason for writing the terroristic statement, he replied that it was only a joke. Stone was obviously unaware that neither the police state, the nanny state, or the education system have a sense of humor or the ability to use or decipher common sense. For that reason, he was detained after being deemed “disruptive” and “disturbing schools.” By the latter designation, one can only surmise that the word “gun” had, at some point, spread to other schools in the area and was now becoming a significant national security threat. In response, since Stone had not actually committed a crime, police were forced to fall back on the standby law enforcement reaction when faced with law abiding citizens – they arrested him for “disorderly conduct.” School officials followed by suspending him from school for a week. “I regret it because they put it on my record, but I don’t see the harm in it,” Stone said. “I think there might have been a better way of putting it, but I think me writing like that, it shouldn’t matter unless I put it out towards a person.” His mother, Karen Gray, stated that, “If the school would have called me and told me about the paper and asked me to come down and discussed everything and, at least, get his point-of-view on the way he meant it. I never heard from the school, never. They never called me.” Judging by his mother’s comments, one is justified in wondering whether or not Stone’s descent into the world of terrorism actually began earlier than his recent foiled attempt at fiction writing. Perhaps it was Stone’s family life that led him to become such a domestic extremist and heartless dinosaur killer. After all, his mother was completely unaware of the fact that her child was, in fact, not hers at all, but that he belonged to “all of us.” Stone’s classmates have not been interviewed for this story. However, one suspects that they are horrified that Stone will return to school next week, raising the possibility that he will strike yet again. Stone’s neighbor, whose dinosaur he allegedly killed, was also not interviewed, presumably because the pet owner was stricken with grief and also because dinosaurs no longer exist. In the end, the message of the American Nanny and Police states are clear – Killing Dinosaurs is wrong. Guns are bad. And the power of words should never be underestimated.Note: While the above was written in a sarcastic, satirical dramatization, this story is 100% true. Click here.