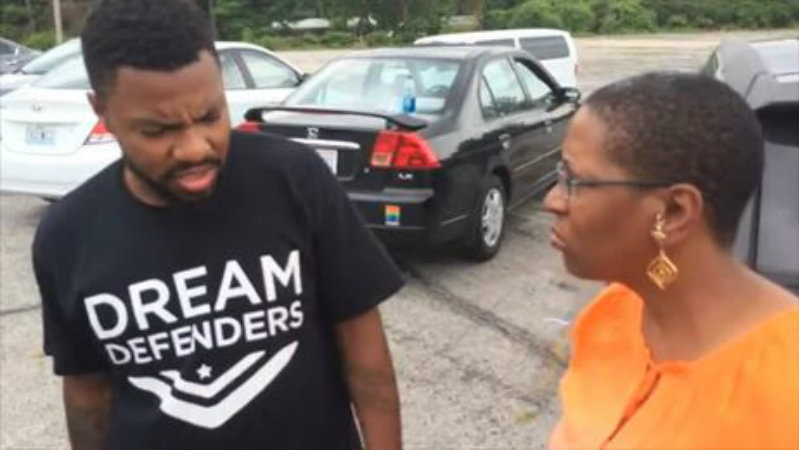 With all of the events and happenings in Ferguson, and elsewhere, I totally missed this story from Wednesday afternoon. Evidently cops raided a church building and it is not the first time they have done so.

Why did they raid it?

Because people are sleeping over.

Greater St. Mark Family Church in St. Louis, Missouri was a safe haven for wounded protestors from nearby Ferguson demanding justice in the Michael Brown shooting.

Reports from about 12:45pm on Twitter and Instagram stated that it had been raided by St. Louis County Police.

Storman Academy, a school on church property, was being used as a first-aid shelterfor protestors injured by tear gas as well as a place for organizers to plan strategy, but its charitable efforts apparently caused it to face unwanted attention from the police.

In a video taken by Elon James White, a church organizer said,”County police came out today to this humanitarian shelter, and they’ve effectively shut it down on a false charge that there were people sleeping in the building, and they’re citing occupancy permits, but their information was incorrect. It’s been used solely as a humanitarian shelter.”

The most thorough account of the raid currently seems to come from the Twitter account of William Jelani Cobb, a contributor to the New Yorker and the director of the Institute for African American Studies at the University of Connecticut.

At Greater St Mark Church. Witnesses say police came to the building which was being used as aid station for protestors. Police are gone, pastor of the church said they’d surrounded the building re charge that ppl were sleeping inside.

Tommie Pierson, pastor of the church, is also a state rep. Saw police on the premises. Amnesty International observers are at the scene now. Organizers saying this is the 3rd time police have come here. Last night they had assault weapons.

Much more at Huffpo…

Three times this church has been raided and a witness said they were carrying “assault weapons.” Unbelievable.

According to reports on Twitter, police on Wednesday afternoon raided the local St. Marks Church, which had become a refuge and medical aid station for protesters who had been injured by tear gas.

Church says it was a safe space for organizers. Police say they violated housing policy by having ppl stay overnight. #Ferguson

Did you ever think that in America you would see cops raiding churches for doing what churches do?

Here is a video report from Reconciling Ministries Network on Facebook:

#Ferguson police raid local church that was allowing the Dream Defenders and other peaceful protesters a safe space. The…

Churches help people. That is the function. Don’t the cops in Ferguson have something better to do?

The police raided the site to take Maalox? Heaven forbid that someone should be able to receive treatment after being tear gassed.

Here is a statement from the St. Louis County Police Department:

On Wednesday, August 20, 2014, at approximately 11:45 am, St. Louis County Police Officers responded to an abandoned school building near St. Mark’s Church after learning that individuals were occupying the structure. Officers contacted a representative of the church, who advised he was aware that several people were occupying the structure. The representative was not aware that the building wasn’t zoned for occupancy and if it was it would need an occupancy permit. The representative escorted the officers to the location and voluntarily opened the building with a key. It appeared that five to seven people were sleeping in the facility but no one was present. Officers on the scene advised there was no animosity between the police or the representative of the church. The representative stated that he would advise the individuals to leave.

Police had nothing better to do than to hassle some people who had no other place to sleep or seek medical aid? Really?

With all that is happening in Ferguson this was their priority?

I’m not buying it.

To me this seems like just another attempt to shut down those who, for the most part, have been clinging to their constitutional right of peaceful assembly.

Not all protesters in Ferguson are violent. But police seemingly want them all gone, peaceful or not.