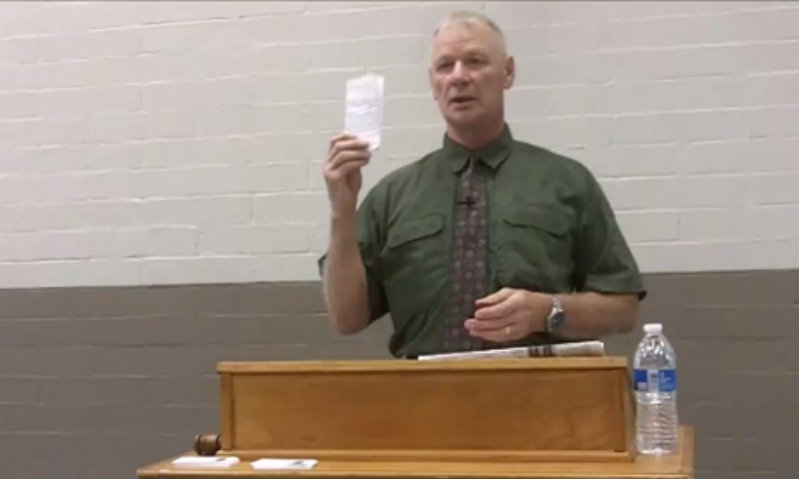 On August 20 it was reported that Dan Page was suspected to be a crisis actor. Among other things, the rationale seemed to be that he was involved in the truth movement, because of a speech that he had previously given to a group of Oath Keepers. It was believed that a police state alarmist could not be a guy who was pushing the media out of the way in Ferguson. On August 21 Crooks and Liars ran with the story of Page’s speech to a local Oath Keepers’ Group and highlighted a lot of his negative statements that could be perceived as racist, sexist or violent. Yesterday, August 22, Dan Page was put on administrative leave, not for pushing a CNN correspondent but, for controversial remarks made in the video that was originally meant to prove he was a crisis actor.

Was this a deliberate attempt to cause more division and smear the gun culture? There certainly are plenty of “bones to pick” with Oath Keepers it would seem, after their participation in the Cliven Bundy ordeal. That does not mean this is a set up but CNN is certainly known for false reporting and the use of crisis actors to support an agenda. In my mind the biggest clue that this may have been orchestrated is the simple fact that the reporter was pushed back while the camera operator (behind the cops at one point) was left to film the entire incident and seemingly left unbothered. Why was the reporter in the way while the camera man was not?

Also notice that after he is let go, Don Lemon again walks toward the camera, with one cop actually letting him walk right past him, to indicate that being pushed back by police was simply part of a staged incident. At first Lemon acts as if he respects the cop’s wishes and then steps back to where he was pushed from in the first place? Would police really stand for that? If police were really attempting to clear the area none of this would this be the case in my opinion. Was this a staged scene? You decide. -Dean Garrison, Editor, D.C. Clothesline

Sergeant Dan Page of the St. Louis County Police Department was caught earlier this week participating in what seemed like a staged CNN broadcast in Ferguson where he shoved reporter Don Lemon while standing with peaceful protesters.YouTube activist The Black Child noticed the encounter on CNN and quickly identified Page and exposed his radical views in the video below. The Black Child pulled clips from a 2012 lecture given by Sergeant Page where he gives detailed plans of a military police state takeover of America.CNN has now confirmed the officer pretending to manhandle reporter Don Lemon is indeed Dan Page in that 2012 lecture. Page has been suspended for his ideology and will be forced to undergo psychiatric evaluation. Of course, they still pretend that Page wasn’t a CNN-paid provocateur in that ridiculous sidewalk scene.

Lemon uses the opportunity to smear the Oath Keepers as sharing Page’s views. However, they report Oath Keeper’s response that Page is not a member of their organization and was only invited to lecture about the police state.This is the second time in a week that an activist journalist got a thug removed from the Ferguson protest. Three days ago a police officer pointed an assault rifle in the face of a peaceful citizen journalist and says “I will fucking kill you“. When the livestreamer asks for his name the officer replied “Go fuck yourself!”The officer was removed from Ferguson the following day and suspended. Activist journalists have done more to enforce police accountability this week than authorities seem to have done in a span of years.It’s a very interesting world we live in.