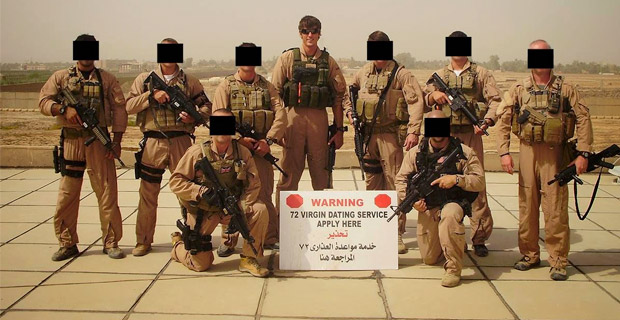 Marine Corps veteran Nick Powers is pulling no punches regarding ISIS threats to raise the flag of Allah in the White House and bring terror to the homeland.

In a Facebook post that has gone viral, using the hashtag #AmessageFromtheUStoISIS, Powers posted the above “72 Virgin Dating Service” image and a very stern warning to those who would attempt to bring jihad to U.S. soil:

To all you ignorant Islamic extremist f***s. As I sit here watching you execute women, children and men in the Middle East I chuckle. Why do I chuckle you may ask? Well let me explain something to you idiots who think you are so tough. You are scaring a population that doesn’t know how to fight, you’re bullying the weak. What did Saddam’s troops do when we came to town? Surrendered, twice… All your threats of coming to America and raising your flag over the White House amuse me more than you could ever understand. In 2012 there were 21.2 million veterans in the United States. Do you understand what that means? That means there are millions of pissed off veterans who have been dealing with years of abuse from their government stabbing them in the backs and having to watch friends die because you Islamic idiots can’t seem to act like human beings and stop terrorism and violence. It’s one thing to take over an Islamic state, pretty sure we plowed through Fallujah in 4 days, do you really think you stand a chance on US soil? Do you really think it would be smart to poke that bear? Remember we are armed in the US and I can promise you that the Geneva Conventions will not apply to you. You attack us and there is no mercy. The ball is in your court Islam, we are more than ready to send you to your “prophet” Mohamed….

UPDATE: To all who read this and assume this is against all Muslims, I am sorry you are too blind to read, this isn’t against Muslims in general. If you feel otherwise I suggest you look at yourself in the mirror and ask yourself one question, am I an extremist? You say Islam is the religion of peace, since when does terrorizing the innocent (beheading women and children, wtf?) mean peace? This is directed at all extremist, if this offends/makes you angry or think I am racist you are are probably an extremist…

Powers later accepted an invite to appear on Fox News and share his thoughts.

As tensions continue to mount, on both sides, it is becoming more and more apparent that America has not heard the last of ISIS. You must understand that whether you support air strikes against the Islamic State, or not, the war could come to your back yard.

This is their threat.

Terrorism preys on the weak, just as Powers notes in his message.

Intimidation is a big part of the game. We need people who will stand strong where our government may not.

Should terror happen here you can not count on anyone to defend you and your loved ones other than yourself. This is why we have the Second Amendment in this country.

If threatened, stand tall and send them to their black-eyed virgins.