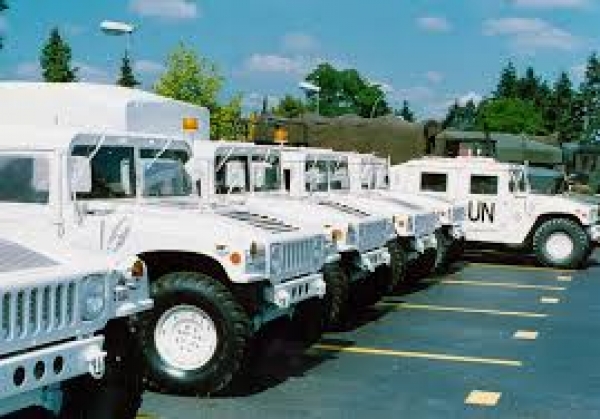 The immediate problem in Ferguson, MO has to do with the potential of martial law being called there. A few days ago, I thought, “well, that’s obviously what they want!” However, since then, I’ve paid attention to what leaders in the UN are saying and, as it turns out, I’m thinking martial law is only a step on the ladder. The final step may well be giving the UN permission to insert itself into the situation in Ferguson so that they will be able to call the shots with the Obama administration. I wrote about that and the article – Ultimate Gameplan: Obama Defers to United Nations to Remove America’s Sovereignty – on another site.

Once this happens, America is well on its way to losing sovereignty. I believe that this is the end goal that globalists want to happen because they are desperately trying to build a one-world government/system. In order for that to occur, more nations need to be grouped together and come under the authority of the United Nations. Here is a video taken of a guy in Ferguson who says that it’s all about martial law.

You can read more about this video and Tim Brown’s take on it here. In my view, what the dude in the video says makes sense. What Tim Brown notes also makes sense. I fully believe the feds want to put martial law into effect, either to see if they can do it or to see what they can do after it’s in effect. Both are plausible possibilities.

But what happens after martial law is instituted? Several things, aside from the obvious new set of rules that the area in question would be placed under. With the UN spewing more rhetoric, specifically about Ferguson, and with Eric Holder physically going into the area for an “investigation,” and Gov. Nixon seeming to incline himself to say that Officer Darren Wilson must be prosecuted (presuming him to be guilty of murder), we are seeing a ramping up of the situation.

Within the past few days, the UN has specifically pointed to the Ferguson situation saying that a full investigation needs to be done. More recently, the same person – Navi Pillay – the top human rights chief at the UN, has stated the following:

“I condemn the excessive use of force by the police and call for the right of protest to be respected. The United States is a freedom-loving country and one thing they should cherish is people’s right to protest…Apart from that, let me say that coming from apartheid South Africa I have long experience of how racism and racial discrimination breeds conflict and violence…”

Though she went on to recount the ways in which she believes apartheid actively exists in parts of the United States as it did in South Africa when she was growing up, she had nothing to say about the fact that roaming gangs of young blacks are constantly on the warpath to extinguish the lives of as many white farmers as possible. The UN has really nothing to say about that.

This situation in Ferguson – as well as other racial situations where it appears that a white person harms or kills a black person solely based on race (though when the shoe is on the other foot, that is not the case), are being created or fanned into flame because our federal government has something to accomplish.

The Obama administration – in my opinion – is desperate to show that racism in America is alive and well and getting worse. They dare not show the many times black on white crime occurs though. They must show only when members of the black community are killed by whites (including white police officers).

If they can successfully show that parts of America are out of control racially, the government can call for martial law. This is in spite of Mr. Obama’s warnings to Gov. Nixon to ensure that National Guard troops should be used in a “limited and appropriate way.“

President Obama appears outwardly to not want the National Guard in Ferguson and moreover, he will probably not outwardly agree that martial law should be called (if and when it is). However, I believe this is all a plan to do whatever it takes to make it seem as though the United States cannot handle its own racial issues and because of that, room should be given for the UN to come in and address the situation using its authority.

The UN only has authority over countries when that authority is given to the UN. I firmly believe that the Obama administration wants to give the UN authority to deal with America’s “racial” problem. If and/or once that happens, the UN will remain on inside our country continuing to grab as much of America’s sovereignty as possible.

I may be spitting in the wind, but this is the only thing that makes sense to me. It’s not about calling for martial law as an end unto itself. It’s about a far bigger picture that includes the UN. If it doesn’t happen with the Ferguson situation, it’ll happen with another situation.

The fact that a black police officer also recently shot an unarmed white male with the media ignoring it simply proves that this whole thing is very one-sided. If the world will begin to the see America as another “apartheid state,” then I firmly believe that the Obama administration will begin working diligently with the UN to “correct the problem” that has actually been creating by community “agitators” like Al Sharpton.

We will certainly see how things unfold, folks. Let’s all stay tuned and keep our minds on the fact that we need to look at the BIG picture.

What does the Obama administration want to accomplish? I don’t believe it’s about martial law or setting the Constitution aside (though I do believe those things are part of the process. The ultimate goal is to hand over America’s sovereignty to the United Nations.

Fred DeRuvo is the author of numerous articles and a growing number of Name Your Linkbooks related to conservative theology and politics. Fred received his Bachelor’s degree from Philadelphia College of Bible and his Masters from Tyndale Theological Seminary. Fred received his Th.D from Northwestern Theological Seminary in Florida. Listen to Fred’s program and on MPR 105.3 FM in the Philippines. Fred began Study-Grow-Know Ministries several years ago where he fights the scourge of Leftist politics and policies that seem to be gaining a foothold in America. His blogs include Study, Grow, Know and Politically Correct Morass.