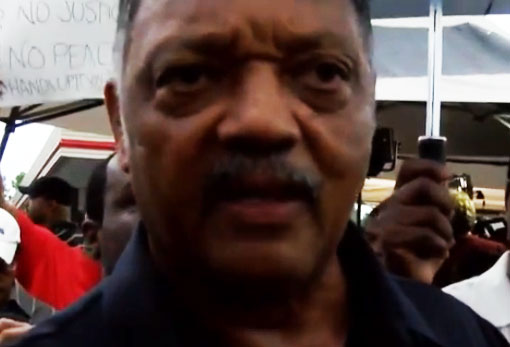 Jesse Jackson was recently caught on camera by Ferguson protesters who called him out for showing up just to exacerbate the situation in the riot-racked city rather than helping matters:

(Transcript, via Down Trend)

“Hey, Jesse Jackson. How you doing? Are you here to support us?” one protester began, approaching Jackson’s vehicle and recording the interaction.

“Are you marching today with us, or are you just going to sit in the car?” the second protester demanded.

Jackson remained quiet throughout most of the interaction, but at that point, his driver interjected: “Wait a minute, brother…”

“Ain’t no, ‘Wait a minute brother,’” the first protester retorted, growing increasingly irate. “This is real! We activists out here! … You’re not a leader. We don’t want you here, brother. Matter of a fact, you’re not even a brother. You can keep moving and get them brothers out of jail. That’s what you can do!”

This comes a week after protesters booed Jackson en masse:

Jesse Jackson getting booed off for asking for donations for church. #Ferguson pic.twitter.com/osEUt54EtE

Protesters also chanted “F*** Al Sharpton!” when the former FBI informant and known race baiter showed up for what a lot of protesters also said was only to make things worse.

The people of #Ferguson are pissed at Obama and Al Sharpton via live stream. "Didn't do shit for us" and "Fuck Sharpton"

As for President Obama, also booed and cussed out by angry protesters, well…as demonstrated before, he’s checked out. He’s gone on a permanent mental vacation. Even the mainstream media has figured this out enough to be “baffled” by it.

In the meantime, whatever the goal was of Jackson and Sharpton rushing to Ferguson — unless it was to get repeatedly cussed out and booed by a large number of people, apparently they missed it. By a lot.