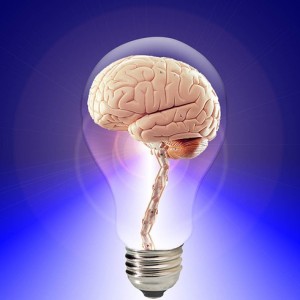 Are people dumber than they used to be?  Were previous generations mentally sharper than us?  You may have suspected that people are getting stupider for quite some time, but now we actually have scientific evidence that this is the case.  As you will read about below, average IQs are dropping all over the globe, SAT scores in the U.S. have been declining for decades, and scientists have even discovered that our brains have been getting smaller over time.  So if it seems on some days like you woke up in the middle of the movie “Idiocracy”, you might not be too far off.  Much of the stuff that they put in our junk food is not good for brain development, our education system is a total joke and most Americans are absolutely addicted to mindless entertainment.  Fortunately we have a lot of technology that does much of our thinking for us these days, because if we had to depend on our own mental capabilities most of us would be in a tremendous amount of trouble.

Sadly, this appears to be a phenomenon that is happening all over the planet.  As a recent Daily Mail article explained, IQ scores are falling in country after country…

Richard Lynn, a psychologist at the University of Ulster, calculated the decline in humans’ genetic potential.

He used data on average IQs around the world in 1950 and 2000 to discover that our collective intelligence has dropped by one IQ point.

Dr Lynn predicts that if this trend continues, we could lose another 1.3 IQ points by 2050.

One IQ point does not sound like a lot, but when you go back even further in time the declines become a lot more dramatic.  For example, a psychology professor at the University of Amsterdam named Jan te Nijenhuis has calculated that we have lost a total of 14 IQ points on average since the Victorian Era.

And we don’t need a professor to tell us that this is true.  Just go back and read some of the literature from that time period.  Much of it is written at such a high level that I can barely even understand it.

There is other evidence that people are getting stupider as well.  For instance, SAT scores in the United States have fallen significantly in recent years…

There appears to be a disturbing trend in American high schools. If we judge the quality of education by the scores that students get on their SATs, then it appears that things are getting worse. Since 2006, the overall average SAT score has fallen by 20 points, dropping from 1518 to 1498 in 2012. Scores are also down in each of the three categories tested, with reading dropping 9 points, mathematics dropping 4 points, and writing falling 9 points. It’s a fair bet that students aren’t becoming less intelligent, so exactly what is going on?

And this decline in SAT scores is not just limited to the past few years.  As the following chart from Zero Hedge demonstrates, SAT scores have been declining in America for decades… 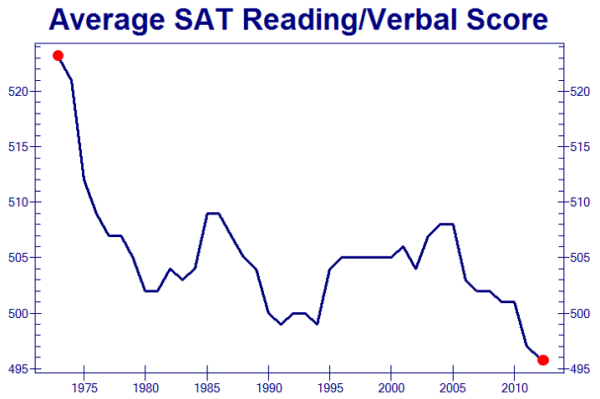 There are even some scientists that are convinced that this decline in the mental ability of humans goes back for thousands of years.  Some blame genetic mutations for this decline, and others point to the fact that our brains have been getting smaller.  For example, just check out what one study conducted at Cambridge University concluded…

The decline, said scientists, has happened over the past 10,000 years. They blame agriculture, with restricted diets and urbanization compromising health and leading to the spread of disease.

Most of us today just assume that people are smarter than they ever have been before.

Most of us today look down on our ancestors and mock them for being so primitive.

But the truth is that if we had to go up head to head against them in mental challenges, we might find ourselves greatly humbled.

At the end of this article, I have posted an eighth grade exam from 1912 that was donated to the Bullitt County History Museum in Kentucky.

I should know – for a short period of time I once taught eighth grade students.

So when I first came across the exam posted below, I was amazed at how difficult it was.

Could you pass such an exam?

I don’t know if I could.

-Through which waters would a vessel pass in going from England through the Suez Canal to Manila?

-How does the liver compare in size with other glands in the human body?

-How long of a rope is required to reach from the top of a building 40 feet high to the ground 30 feet from the base of a building?

-Compare arteries and veins as to function. Where is the blood carried to be purified?

A full copy of the exam is posted below.  Please notice the absence of multiple choice questions where a student can guess by circling an answer.  In the old days, kids were actually expected to be able to think and to be able to write…

Do you believe that people are actually getting stupider?

And is “stupider” actually a word?