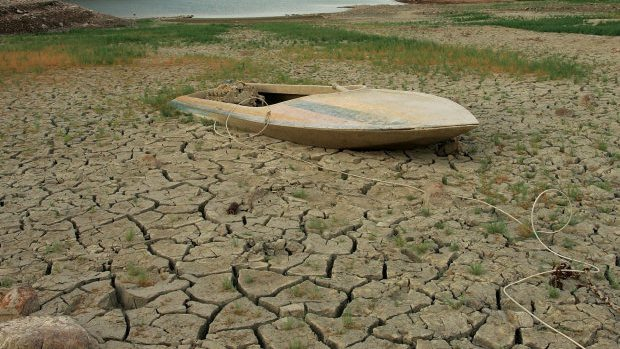 The residents of the San Joaquin Valley are facing an ominous crises due to California’s drought. Unlike most communities in the drought stricken state, the unincorporated town of East Porterville isn’t just running low on water. For some residents, they’ve completely run out.

At least 182 of the 1400 households in the town have run out of well water, prompting the county to provide 12 gallons of water for each resident that is facing water scarcity. With the help of the Red Cross, the bottled water was supplied at the cost of 30,000 dollars, and is expected to last 3 weeks. For some residents, the shortage is just too much.

East Porterville resident Angelica Gallegos fought back tears as she described being without water for four months in the home she shares with her husband, three children and two other adults.

Farmworker Oliva Sanchez said she still gets a trickle from her tap, but dirt started coming out with the water about a week ago.

“I try to use the least possible. I’ll move if I have to,” she said.

If you can believe it, the number of properties with dry wells may in fact be higher. Some residents are afraid to report these issues for fear of being evicted by their landlords, or possibly having their kids taken away by CPS.

As insane as that sounds, it may be the least asinine part of this whole situation. Perhaps it’s fitting that these folks are receiving their aid in the form of bottled water, because nearly every water bottle company is situated in some of the most drought stricken places in California. Apparently, California is one of the few states that doesn’t protect groundwater usage, so corporations are free to bottle it up from the local springs or the municipal water supply.

It’s total madness when you really think about it. These companies are still bottling up precious water so it can be sold across the country. And there isn’t even anything special about it, since nearly half of all bottled water is nothing more than tap water. In parts of the country where people do have plenty of water, they can buy California’s dwindling supplies at a significantly higher price than their tap water, even though it is essentially the same thing. As reported by Mother Jones:

Despite the fact that almost all US tap water is better regulated and monitored than bottled, and despite the hefty environmental footprint of the bottled water industry, perhaps the biggest reason that bottling companies are using water in drought zones is simply because we’re still providing a demand for it: In 2012 in the United States alone, the industry produced about 10 billion gallons of bottled water, with sales revenues at $12 billion.

Perhaps running out of drinking water isn’t the only major milestone of this drought. We have now reached the same situation that countries like India have been dealing with for decades, where the Coca Cola Corporation can build a bottling plant that soaks up all the groundwater from the region, leaving the locals high and dry. The drought is showing Californians what it’s like to live in a third world country for the very first time.