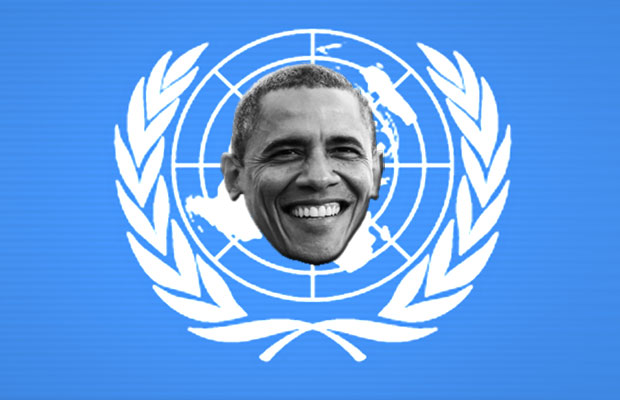 The New York Times is reporting that the Obama administration is working behind the scenes to “forge a sweeping international climate change agreement to compel nations to cut their planet-warming fossil fuel emissions,” without seeking approval from Congress whatsoever:

In preparation for this agreement, to be signed at a United Nations summit meeting in 2015 in Paris, the negotiators are meeting with diplomats from other countries to broker a deal to commit some of the world’s largest economies to enact laws to reduce their carbon pollution. But under the Constitution, a president may enter into a legally binding treaty only if it is approved by a two-thirds majority of the Senate.

To sidestep that requirement, President Obama’s climate negotiators are devising what they call a “politically binding” deal that would “name and shame” countries into cutting their emissions. The deal is likely to face strong objections from Republicans on Capitol Hill and from poor countries around the world, but negotiators say it may be the only realistic path. [emphasis added]

So because Obama and his administration haven’t been able to get everyone on board with the man made climate change “science,” despite continuously espousing that there is a consensus and the debate is over (even though there clearly isn’t a consensus and the debate obviously isn’t over or he wouldn’t have to go around Congress to do this), Obama is going straight to the UN and brokering a deal to get climate change laws passed anyway.

The other nations involved realize what is going on here, too. The NYT continues:

“There’s a strong understanding of the difficulties of the U.S. situation, and a willingness to work with the U.S. to get out of this impasse,” said Laurence Tubiana, the French ambassador for climate change to the United Nations. “There is an implicit understanding that this not require ratification by the Senate.” [emphasis added]

The deal would be an attempt to finally pass a legally binding global climate change treaty like the one that failed in 1997, aka the Kyoto Protocol, a mechanism based on the 1992 UN Agenda 21 Earth Summit.

Carbon taxes and energy austerity, with even higher energy premiums, are sure to follow. Al Gore must be absolutely thrilled, considering he stands to become the world’s first “carbon billionaire” should such a thing go through.

This isn’t the first time Obama, the self-proclaimed “constitutional law professor,” has bypassed Congress to get his way on the climate change policies he wants to enact.

The president has planned this so-called “war on coal” ever since his first campaign (via The New American):

During his 2008 campaign, he told the San Francisco Chronicle, “If somebody wants to build a coal-fired power plant, they can. It’s just that it will bankrupt them.”

Later during that same interview, Obama admitted that “electricity rates would necessarily skyrocket” under his plan for cap and trade. [emphasis added]

Remember, this is also the same president that told a group of young African leaders at a town hall meeting in April 2013 that if everybody has nice houses, cars and air conditioning, the planet will “boil over.”

Delegates at next month’s United Nations General Assembly in New York will continue working on the new deal to be drafted in December.

Meanwhile, we are still teaching children in school that America is a constitutional republic — with a straight face.