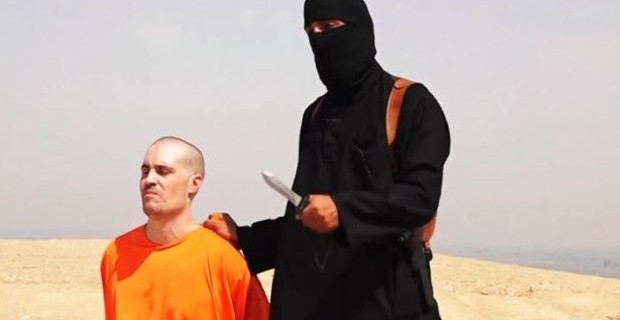 If you recall, we covered a Muslim imam who described how to kill the infidels, telling his disciples to enjoy themselves while cutting the throats of their enemies. Now, jihadi cleric Hussein bin Mahmoud claims “Islam is a religion of beheading.”

It’s not that we needed this cleric to tell us this, but once again, I don’t see Muslims out in the streets in mass saying this is not so. In fact, the silence of their opposition to any of what Islamists are doing throughout the world is deafening. Their silence is complicity.

MEMRI reports that Mahmoud, who is a prominent writer on jihadi forums, expressed his support for the beheading of journalist James Foley, claiming that it was very effective in terrorizing the enemies of Islam and that Islam allows and encourages beheadings and other atrocities.

MEMRI then provided the following excerpts from the Shumoukh Al-Islam forum that were posted by Mahmoud on August 21, 2014:

“All Scholars… Agree On The Permissibility Of Killing A Harbi Infidel”

“I don’t know what to say. My mind is perplexed by words I have read and heard from people whom I do not know how to describe!! Millions of Muslims have been killed, tortured and driven from their homes; tens of thousands of Muslim women have had their honor violated and have been sexually abused by the Americans – yet people are weeping over a Christian American harbi infidel who entered the Islamic State, knowing full well what the Islamic State is, and without a pact [of protection]. Were the soldiers of the Islamic State supposed to pat this American harbi on the back and smile at him? All scholars, without exception, agree on the permissibility of killing a harbi infidel, and agree that his blood and property are fair game. Most of them [also] agree on the permissibility of killing him if he is taken prisoner. So where does this condemnation of the IS come from?… Let it be known to all people that when a harbi enters the land of Islam without a legal pact [of protection], his property, life and progeny are fair game.

“Many Muslims are influenced by the West’s false views and its repulsive ideas, which are exported to the Islamic nation in order to weaken it and change the perception of its youth so that [the youth] become cowardly and subdued and abandon the means of power and terror, and thus create a generation that does not know fighting or the cutting of necks. Recently we saw some who are considered scholars mixing things up and deceiving the nation, changing the concepts of Islamic law to fit the plans of the enemies. We don’t know if they did this out of ignorance about some of the tenets of Islamic law, or were [simply] lying…”

“Chopping off the heads of infidels is an act whose permissibility the [Muslim] ummah agrees on. Beheading a harbi infidel is a blessed act for which a Muslim is rewarded. The [only] matter scholars disagree about is the question of transferring the head from one place to another, traveling with it and carrying it around…”

Bin Mahmoud: Jews, Christians, Shi’ites And ‘Alawites Who Committed Crimes Against The Muslims Must Be Beheaded

After clarifying that he is opposed to killing Muslims, bin Mahmoud continues: “As for beheading infidel Jews, Christians and ‘Alawites, as well as apostate Shi’ites, who commit crimes against the Muslims, they must be terrorized, filled with fear and beheaded without any respect. Cutting off heads is part of the tradition of the [Prophet’s] Companions. In the Koran Allah ordered to smite the infidels’ necks and encouraged the Muslims to do this. He said [in Koran 47:4], ‘When you meet those who disbelieve on the battlefield, smite at their necks until you have killed and wounded many of them…

“How many hadiths [relayed by] the Prophet’s Companions have we read in which they demanded that he strike the necks of certain men, and the Prophet did not condemn the striking of necks… Striking necks was a well-known matter that did not elicit any condemnation in the eras of the Prophet, the rightly-guided caliphs and their successors, right until the time of the Christian occupation of the Muslims’ lands in the [20th] century. Those crusaders fought the Islamic legal concepts, distorted the religion, and convinced the Muslims that their religion is a religion of peace, doves, love and harmony, and that there is no blood in it, no killing and no fighting. The Muslims remained in this state until Allah revived the tradition of beheading by means of the mujahid and slaughterer Abu Mus’ab Al-Zarqawi, may Allah have mercy upon him and accept him as a martyr.”

“Islam Is A Religion Of Bloodshed”

Bin Mahmoud goes on to quote a long list of texts which, according to him, prove that Islam condones beheading as a means of terrorizing the enemy, and then emphasizes once more that Islam is not a peaceful religion, since its essence is jihad and martyrdom. He concludes that “Islam is a religion of beheading”:

“The truth is that what distorts the image of Islam is not the beheading and terrorizing of infidels, but rather those who want [Islam to follow the path of] Mandela or Ghandi, with no killing, fighting, brutality, bloodshed or the striking of heads or necks. That is not the religion of [the Prophet] Muhammad son of ‘Abdallah who was sent [to fight] with the sword [until]   Judgment Day. The only Koranic surah that is named after him, Surah Muhammad, is [also] called ‘The Surah of Fighting’…

“Islam is a religion of power, fighting, jihad, beheading and bloodshed, not a religion of turning the left cheek to whoever slapped you on the right cheek. On the contrary, it is a religion of breaking the hand that is stretched out to humiliate the Muslim. [Any Muslim] who fights for his property, blood or honor is a martyr.

“In Islam, tourism [means] jihad for the sake of Allah… There is no true life for its believers except through jihad, [and] the goal of its fighters is to die for the sake of their religion…”

Still buying the propaganda that Islam is a religion of peace? It is anything but that. It is a bloodthirsty totalitarian ideology with a thin veil of religion that promotes pedophilia, beheadings, theft, murder, jihad and Islamic supremacism in the name of Allah.

Mahmoud is not presenting the world with a “radical” view of Islam, but the proper and correct view of the demonic ideology as promoted by Muhammad. However, these devils’ propaganda do not cause God-fearing Americans to be terrorized. It only disgusts us and angers us, as was recently evidenced in the words of Marine veteran Nick Powers when he said, “It’s one thing to take over an Islamic state, pretty sure we plowed through Fallujah in 4 days, do you really think you stand a chance on US soil? Do you really think it would be smart to poke that bear? Remember we are armed in the US and I can promise you that the Geneva Conventions will not apply to you. You attack us and there is no mercy. The ball is in your court Islam, we are more than ready to send you to your “prophet” Mohamed….”