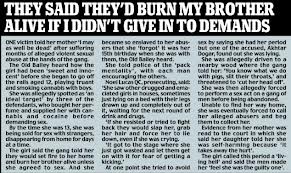 Council staff ignored evidence in the name of political correctness

The sexual abuse and beating of 1400 children went unreported due to fears on behalf of staff members of a council in the UK that they would be branded racist for identifying the perpetrators as Asian men.

“Children as young as 11 were trafficked, beaten, and raped by large numbers of men between 1997 and 2013 in Rotherham, South Yorkshire, the council commissioned review into child protection revealed,” reports the Daily Mail.

The report revealed that “several staff described their nervousness about identifying the ethnic origins of perpetrators for fear of being thought racist.”

Victims of the assaults were doused in petrol and threatened to be set alight, intimidated with guns, as well as forced to watch brutal rapes involving other children, while being told they would face the same fate if they spoke out.

The fact that the majority of the men involved in raping and trafficking the children were of Pakistani origin led to failures on behalf of the council to heed warnings about a culture of “gang rape” that had taken hold in the area, while police also ignored the reports.

The figure of 1400 children raped and beaten is a conservative figure, with the final total expected to be higher.

The story follows similar high-profile incidents in other UK cities where young girls and children have been victims of Asian rape gangs, with authorities turning a blind eye in many cases.

Editor’s Note: Asians in this case are Muslims, for those who have not figured it out. I am fine with the proper journalistic style of Paul Joseph Watson. He is one of the very best and I very much respect that he will report the tough stories. But I don’t want our readers thinking this is a gang of perverted Chinese-Buddhists running around the U.K. Anyone who has been following these stories in Britain knows better, and as Paul reports, these are primarily Pakistanis. It is estimated that 95-98% of Pakistanis are Muslim so it is OK to say it. I don’t think the non-Muslims are fleeing to Britain so that they can rape kids, it is more likely the Muslims bringing that culture of child rape with them. -Dean Garrison, Editor