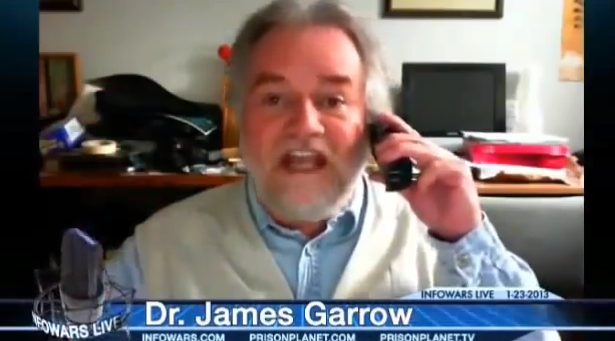 The long arm of President Ebola extends all the way across our northern border into Canada.

Dr. Jim Garrow is the Christian founder and executive director of The Bethune Institute, a charitable organization dedicated to advance education in China via teaching English, giving free books to poor Chinese, and medical scholarships. Through its branch organization, The Pink Pagoda, the institute also rescues baby girls from infanticide  in China, and finds homes for the unwanted girls. Dr. Garrow is credited for saving the lives of over 50,000 Chinese girls for which he was nominated for the Nobel Peace Prize.

Last year, Garrow told the world (via Alex Jones’ radio, Glenn Beck, and other conservative media) that Obama’s U.S. military was purging top brass using a “litmus test” of sorts. High-ranking military officials were being asked “Would you fire on an American citizen?”. Garrow claimed that if one answered no, you would be fired.

A week after his whistle-blowing, on the Oct. 6 Now the End Begins Internet radio program, Garrow claimed that he had been a covert CIA agent but was fired by none other than Obama himself because of his disclosure.

Then Garrow made another bombshell of an announcement — that he knows Obama had ordered the hits that killed Tom Clancy and Andrew Breitbart. (Read more here.)

Although Garrow lives in Ontario, Canada, that hasn’t stopped Obama’s goons from retaliating.

In a message to Agenda 21 Radio Dr. Garrow stated:

“When I arrived home from the Infiltration Tour I unloaded my camper trailer and discovered a pistol in a Ruger bag with ammunition and a gun lock. I called my Son in Law Chris Neilsen who is a cop and he came over and had a look at it. He told me that it is a restricted weapon like one he had to turn in. I asked what they are worth on the black market and he told me an amount that floored me. He didn’t ask me where it came from oddly enough. My wife and I went for a ride on our Goldwing and when we got back the cops arrived and arrested me. They took my passport and kept me in jail for 5 hours. I have 4 charges against me. This was all a set up.”

When contacted by Agenda 21 Radio Dr. Garrow stated that the gun did not belong to him and it was an obvious ‘plant’.

This is what Garrow wrote on his Facebook page:

Valerie and Bathhouse Barry must have had a great laugh today. I was greeted by my local police department who had been informed that I was in possession of illegal firearms. As you remember I just returned from my eastern swing of the “Infiltration Tour”. Guess what was in my camper? A a snub nosed pistol considered to be a restricted weapon in Canada. I showed it to my son in law and low and behold he turned it and me in to the local police. I now know how the Nazis got collaborator jews like George Soros to turn in his own people. 4 different charges have been filed against me and I spent the last 5 hours locked in a jail cell. I am now restricted to staying in my Province, no more Infiltration Tour. Folks may remember that I zoomed home as a result of my daughters serious concussion (she is gradually showing some improvement) and it was her husband who turned me in to the local police. He never asked me how I got the gun that I showed him. I had made a comment about them being valuable on the black market but he showed no interest in learning where I had found it. Rather than ask questions he took the gun to the local police and had me arrested and charged. Little did he or whoever slipped it into my camper know that they were doing Gods bidding.

But let us look at this from the spiritual perspective. Paul went to jail charged falsely with treason and he counted it “all joy”. He encouraged us to be joyful in affliction. Staring at the wall in my cell and praising God took on a whole depth of meaning for me this evening and I must admit that my spirit soared. I understand Paul and what he was saying, I get it. I am falling asleep as I write this but am praising the Lord for his guiding hand in it all.

On Aug. 27, Garrow reported on his Facebook about more messing, this time by Skype:

I learned today that folks have not been able to call me using skype. It turns out that skype arbitrarily and without my permission changed my skype call number from drjgarrow to jim garrow. I was not notified of the change and of course now all my contacts do not know how to get hold of me through skype.

I would appreciate it if folks would continue to try to get me on drjgarrow rather than what I had not chosen jim garrow. I have used drjgarrow on skype and as my email address for decades. Not a nice thing to have lost all those contacts.

Rubio: American Families are Under Attack
The Floridian