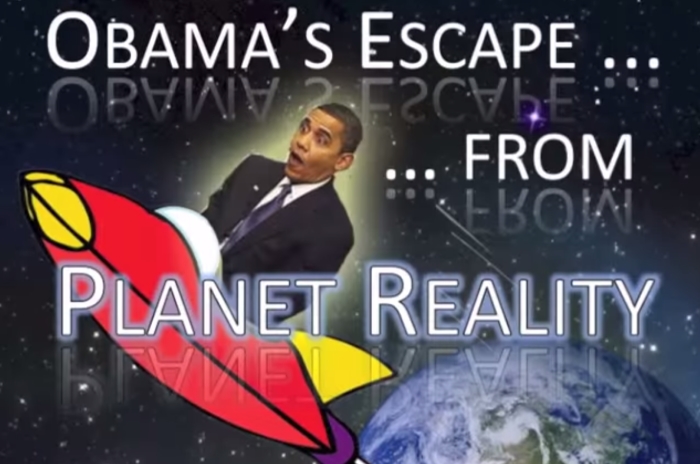 Just minutes after defending Islam in a speech about the beheading of James Foley by the Islamic State (ISIS), President Barack Obama was back on the golf course. There’s something quite significant and symbolic about the President rushing to the golf course to avoid the horrors of a beheading. It’s analogous to the mental running our leaders have to do in order to avoid the truth about Islam. –David Wood

So how does David Wood respond? He creates a bedtime story called Barack Obama’s Escape from Planet Reality. No seriously, he did!

Wood provides recitation of the Koran and the teachings of Muhammad in order to help balance the lies of the Obama administration that no religion would engage in these things and that a just God would not demand such things, according to Islam.

Wood brilliantly uses clips of Obama’s speech in which he denies the very things taught in the Koran. Yes, the same Koran, Obama, with perfect Arabic accent, calls the “holy Koran.”

As Wood has done before in responding to the Boston Bombing and UK Prime Minister David Cameron’s submission to Islam, he makes the point that everything that is said by leaders who try and defend the death cult of Islam is either a flat out lie or is purposefully deceptive.

Using quotes from both the Koran and the hadiths, Wood demonstrates that ISIS (Islamic State) is merely doing what they are commanded to do in the Koran. Those that say they are not obeying the Koran and not true followers of Islam are either silent and complicit, deceiving others, completely ignorant of the Koran or purposefully lying about Islam.

While the story is a bit dark for a children’s book, the point Wood was making is that Obama seems to be oblivious to reality. However, I would note that I believe Obama knows exactly what the Koran teaches and is just fine with it. However, he is more interested in his golf game and all the goodies that come with the office than he is with actually doing the job. His focus is on himself and on bringing America to its knees.

Watch and share with your friends who may still believe that the ideology of ISIS is not true Islam. Then take time to explain to them the true religion of peace through the gospel of Jesus Christ and call them to repent of their sins and obey the true and living God, then learn how you can be useful in stopping the Islamization in America.