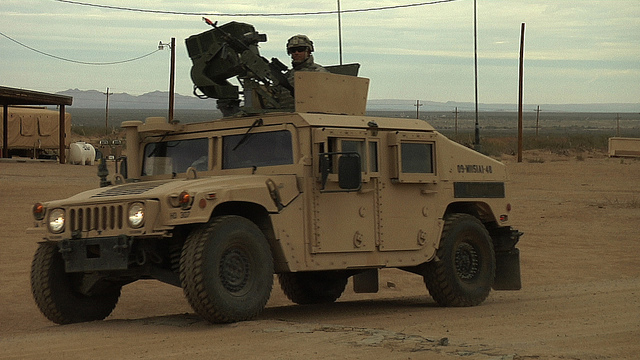 ‘Dozens’ of Police Departments Across America have been Suspended from Program 1033 After they ‘Misplace’ Loads of Military Grade Weaponry.

You know how government agencies often do malicious things with impunity, using the excuse of simple incompetence as a means to do what they really want to do?

Well that archetypical incompetence has been utilized once more by police departments across America, who claim to have simply ‘lost’ powerful weapons and military grade equipment.

According to the media outlet Fusion.net, these departments have “lost” such things as M14 and M16 rifles, .45 pistols, shotguns, and even Humvee vehicles.

So don’t you wonder how many bodies are on these guns, where they are, and who they were sold to?

The police department in Stockton, California ‘lost’ 2 M16′s, and they were banned from receiving more weapons. The Detroit of California definitely does not need even more people selling guns on the black market, though everyone in Stockton knows they need a gun for self defense.

The means by which these departments are getting military grade weapons is a pentagon program ominously titled ‘1033‘.

Dozens of departments have allegedly been dropped from the program for ‘losing’ weapons, but in reality, who knows if the weapon flow has ceased?

No one from any of these government agencies will speak on this, pretty much everyone questioned about the program and subsequent suspensions declined to comment. To date, dozens of police departments have been suspended from using the program following ‘losing’ all of this military equipment. It is suspected that many of these weapons were not innocently lost as has been claimed, but were actually lost to corruption.