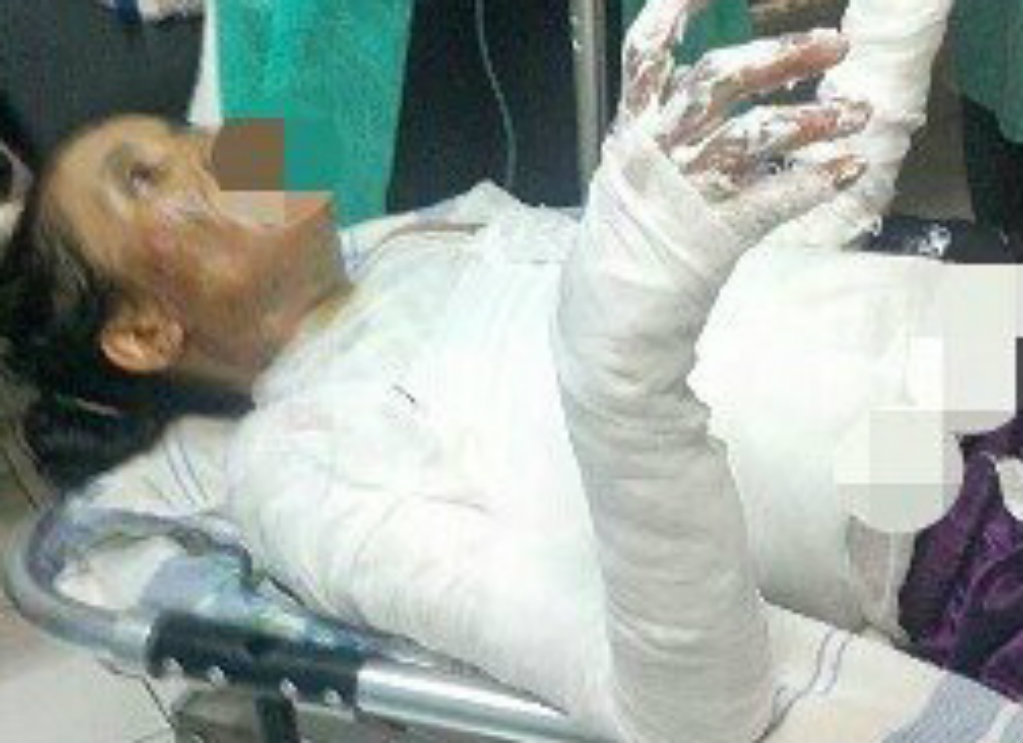 Muslim relatives of a woman conspired to kill her by placing gasoline in one of her kitchen bottles, causing her to catch fire while cooking and burn to death.  The reason?  Earlier she had converted to Christianity and refused to return to Islam.  Now her husband (also an apostate to Christianity) and children are homeless and on the run; nor will police and other family members help them. The full story follows:

On the morning of June 9 in southern Yemen, Saeed woke to the sound of screaming. He shot out of bed, pushed panicked family members aside and saw his wife stumbling out of their kitchen, engulfed in flames.

His wife, Nazeera, had been preparing breakfast at about 9 a.m. when she poured liquid from a cooking oil bottle into a hot pan. The liquid flashed, and the bottle exploded. While her four children watched, screaming, Nazeera was being burned alive.

“I rushed out of the room,” Saeed (full name undisclosed for security reasons) told Morning Star News, weeping. “I couldn’t even speak to ask her what happened. All I could think about was putting the fire out and then getting her to the hospital. But my 16-year-old son, he couldn’t stop himself and held on to her, hugging her while she was burning. He got hurt, and I had to pull him away from her.”

About two weeks later, Nazeera, 33, died as a result of her burns. When Saeed returned to his home in a village (undisclosed for security reasons) after her death, a relative told him the unthinkable – members of both his family and hers had taken the vegetable oil out of the bottle and replaced it with gasoline. Saeed knew the reason – many years ago, the two had become Christians and refused to return to Islam…

Before the attack, Saeed and his wife had already decided to flee their families and the 99 percent Muslim country on the Arabian Peninsula. They got their travel papers two days before the sabotaged bottle exploded.

After doctors said there was nothing more they could do for Nazeera, friends of the couple were able to secure a room in a hospital in Egypt for further treatment. Nazeera died that day, before they could go.

Saeed was with her when she died. Among her last words to him was not to worry and to take care of their children. Saeed left the hospital and took the two-hour trip back home. There a relative told him that one of his brothers and one of her brothers had conspired against them to punish them.

“I was told by one of our relatives that it was a set-up, and they replaced the cooking oil with petrol, which caught flames as soon as she poured it out,” he said.

When Saeed went to police for help, officers told him to bring witnesses who could testify about the alleged conspiracy to sabotage the cooking oil bottle. His children only saw the explosion and could not testify regarding sabotage, and Saeed’s relatives refused to incriminate the alleged conspirators, their own family members.

“No one will be a witness for us,” Saeed said. “And my family told me that if I was killed and cut into pieces, they wouldn’t do anything to help or be a witness on my side.”

Saeed buried his wife and tried to sell everything left in his home, but family members blocked his efforts. Initially his four children lived at his mother’s house after the attack, but he secretly took them to another country before relatives could take them from him.

His last image of home was his relatives descending on his house, he said.

“I lost the way to support myself and everything we had,” he said. “And when we were leaving, I was trying to sell things we had, but some of my family members stopped it so I wouldn’t get anything. Even the day I took the children to leave [the country], they attacked our house and divided our things among themselves. They destroyed the rest.”…