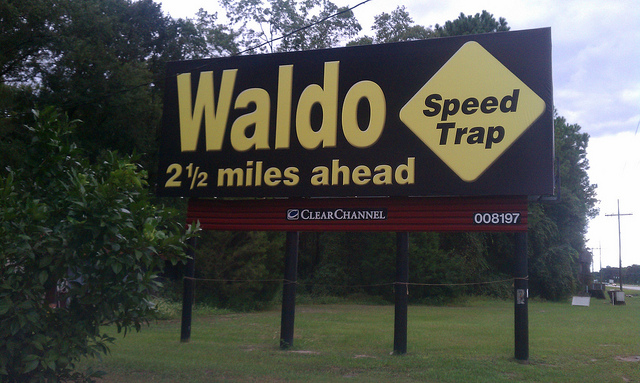 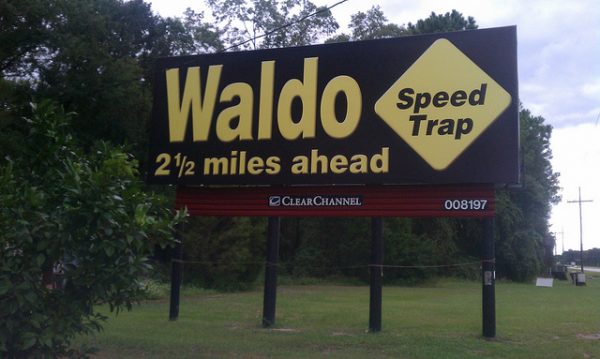 For those who still say it’s a myth that cops are given quotas for how many tickets they have to write, maybe you’ve never been to Waldo, Florida. The National Motorists Association listed Waldo as the third worst speed trap for a town of 50,000 people or less in 2012, and it’s so bad, billboards like the one above are taken out to warn drivers before they get there.

But earlier this week, five police officers came forward to testify before the Waldo City Council that they are mandated to write a certain number of tickets each shift or face punishment — even though such a quota stands in direct violation of state law. Waldo, by the way, only has seven police officers to begin with.

Before a packed room, Officer Brandon Roberts told commissioners they were required by Chief Mike Szabo to write 12 speeding citations per 12-hour shift or face punishment. Roberts explained his claims with the help of an electronic presentation and printed emails as evidence.

“We’re doing this with a heavy heart,” Roberts said. “We would never want to go against our fellow officers but we have no faith in our chain of command.”

It was also noted that apparently half of the city’s $1 million budget comes from something officially listed as “police revenue”.

The officers also accused Chief Szabo of enforcing “questionable” traffic stops and abandoning his post and disabling equipment so none of the department staff could find him.

Szabo has since been suspended pending an investigation. Sadly, Waldo Police Cpl. Kenneth Smith, who was named interim chief following Szabo’s suspension, has also been suspended as well.