They have the wind at their backs and Obama in the White House. Allahu akbar, baby.

On August 27, 2014, the Al-Kataib Foundation, the media wing of the Somalia-based Al-Qaeda affiliate jihadi group Al-Shabab Al-Mujahideen, released Part 6 of the group’s propaganda video series “Mujahideen Moments.” Like Parts 1 through 5,[1] the video is directed at recruiting Westerners to join Al-Shabaab’s ranks; however, unlike the previous installments, which were aimed at Muslims living in the West, and particularly in East Africa, this video extends its call to Muslims in India and Pakistan. 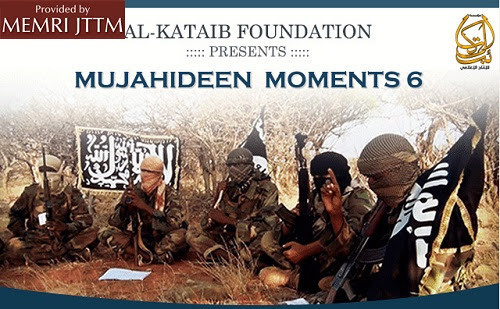 The video features several unnamed fighters who deliver various messages in English, including one who speaks with a British accent. Another delivers a message to Indian and Pakistani Muslims; that message is subtitled in English.

The two addresses carry a similar message: Muslims cannot continue living in the West, which they refer to as dar al-kufr (abode of unbelief), and must emigrate for Allah’s sake to Muslim lands in order to save themselves from the “great punishment of Allah.”

Following is the message of one of the English speakers:

“…Those who are living in the U.S., especially Minnesota, Great Britain, Germany, and many parts of the kufr [unbelief] world – you have a decision to make today. This decision [is] a decision that makes you successful in this dunya [life] and the hereafter, a decision that will have a great effect on your children and your grandchildren. This decision is hijra [emigration] fi sabilillah [for Allah’s sake] to the lands of Muslims, such as Somalia, Iraq, Afghanistan, and many places in the Muslim world.

“If you chose to not make this decision and not answer the call of Allah, know that there is clear evidence against you in the Day of Judgment, in the court of Allah the Exalted. For what are you still living in dar al-kufr [abode of unbelief] for? Is it the schools, the jobs, and the nice settlements you have… know that this was only temporary and the hereafter is internal [sic. eternal].