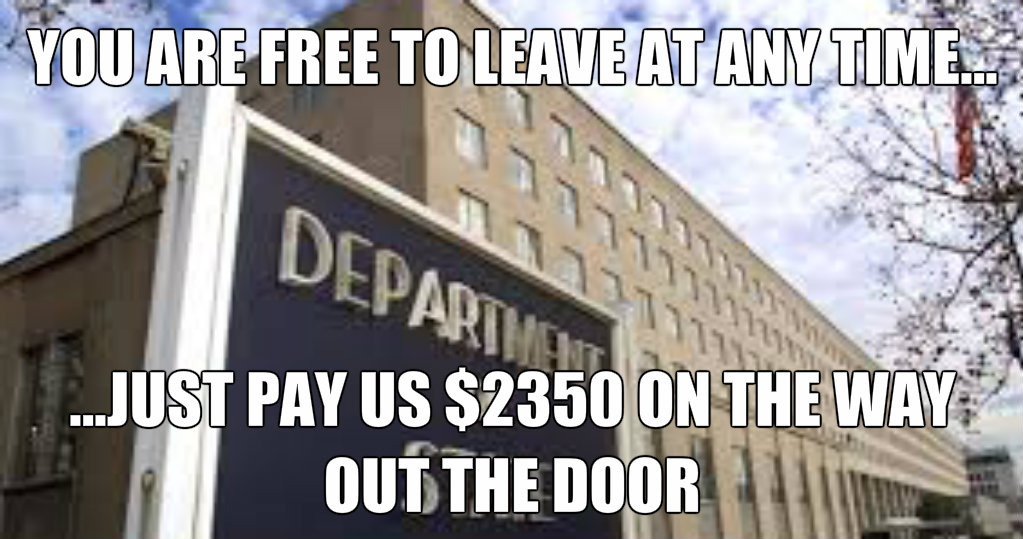 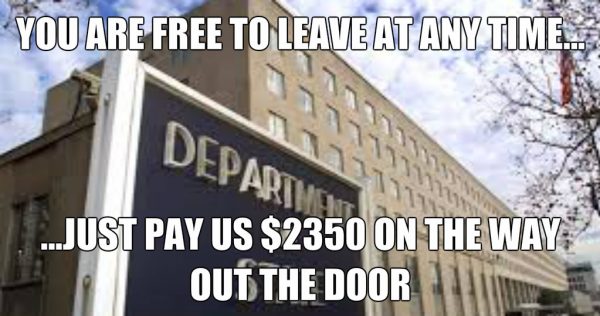 The cost of getting rid of US citizenship has quadrupled to $2350, up from $450. The changes will come into effect on September 6th and the State Department says it is necessary to cover the real cost of processing an application to lose citizenship.

The price hike marks a sharp u turn from 2010 when the State Department decided on the $450 fee “in order to lessen the impact on those who need the service and not to discourage the utilization of the service, a development the Department feels would be detrimental to national interests.”

Announcing the move this week [LINK], the State Department defended it the price tag saying it had to reflect the true cost of the process.

“Demand for the service has increased dramatically, consuming far more consular officer time and resources. Documenting a US citizen’s renunciation of citizenship is extremely costly, requiring American consular officers overseas to spend substantial amounts of time to accept, process, and adjudicate cases. The Department believes there is no public benefit or other reason for setting this fee below cost,” wrote Under Secretary of State Patrick Kennedy.

But Kevyn Nightingale, a tax adviser to people who want to give up their US citizenship, said that he could not believe the process really costs that much.

“It’s supposed to be a cost recovery change and not a tax revenue generator. Having watched the process with so many of my clients, I have trouble believing that it really costs $2,350 apiece,” he told Global News, a Canadian news and current affairs television network.

Nightingale pointed out that the State Department notice gives an estimate of a consular officer’s time at $135 an hour working for 20 hours.

“That means that they feel they’ve got almost 20 hours for each person who is expatriating, and that seems like a lot of time to process the paperwork. I have trouble believing that it’s 20 hours of time. This is, like most government fees, an arbitrary amount. I don’t think you can say much more about it,” he said.

Kennedy says in a memo that the process involves at least “two intensive interviews”, but people who have been through the process say the time they spend in the consulate is much less than that.

Patricia Moon who renounced her citizenship at the Toronto consulate in 2012 said it took nothing like that amount of time.

“The questions are minimal and I didn’t spend more than 15 minutes at the window either time. It’s not intensive. They ask you: ‘Are you aware of the ramifications of your actions?’ And ‘Are you doing this of your own accord?” she said.

New tax laws have seen a record number of Americans renouncing their citizenship this year. In the first quarter only just over 1,000 Americans gave up their nationality, according to Bloomberg News. That’s a hike from the 670 who did so in the same time span last year, and it’s already one third of the way to matching the total number of Americans who renounced their citizenship in 2013.

However, a spokesperson said that the price increase was not meant as a deterrent.

“We can’t speculate on whether the backlog for renunciation appointments will ease as a result of the fee increase.”

In order to leave America, citizens have to prove they’ve been paying tax for five years and if you are worth more than $2 million or if you’ve been paying income tax of $157,000 or more then you have to pay an exit tax like a capital gains tax.