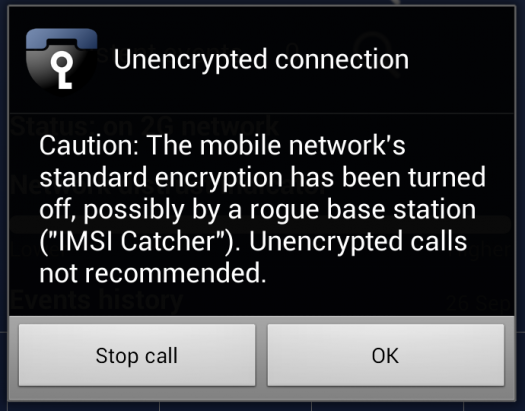 Last week many tech publications and websites, including Popular Science, broke news of the discovery of 17 fake cell phone towers found across America. Andrew Rosenblum notes in the aforementioned article that every smart phone has a secondary operating system, which can be hijacked.

The discovery was made because of an alert to user smartphones.

CryptoPhone users found 17 fake “cell towers” in a month, but don’t know who deployed them or why. If you think you’d know if your calls are being intercepted by seeing the phone connect to “2G,” then think again.

You wouldn’t likely know if you are under cell phone surveillance, but you would if you were about to make a call and your phone displayed an unencrypted connection warning that states, “Caution: The mobile network’s standard encryption has been turned off, possibly by a rogue base station (‘IMSI Catcher’). Unencrypted calls not recommended.”

Through notifications such as that, CryptoPhone users found and mapped 17 fake “cell towers” in the U.S. during the month of July. While most phones can’t find those interceptors, a $3,500 CryptoPhone 500 can. The phone has a Samsung Galaxy SIII body, but unlike the Android OS that comes standard on the Galaxy SIII and “leaks data to parts unknown 80-90 times every hour,” ESD America hardened the Android OS by removing 468 vulnerabilities.

There are many questions that need to be answered including who is placing these towers and why they are placing them.

We Live Security offers a clue:

“What we find suspicious is that a lot of these interceptors are right on top of U.S. military bases.” says Goldsmith.  “Whose interceptor is it?  Who are they, that’s listening to calls around military bases?  The point is: we don’t really know whose they are.”

So is this an NSA related program?

Will this be the next big revelation from Edward Snowden?

Why are those towers near military bases?

Paul Joseph Watson discusses this topic in his latest video:

When are Americans going to stand up and say that they have had enough of these unnecessary invasions of privacy?

Our government spends so much time spying on “domestic terrorists” that they will surely miss those real dangers that are promising to cross our Southern Border.