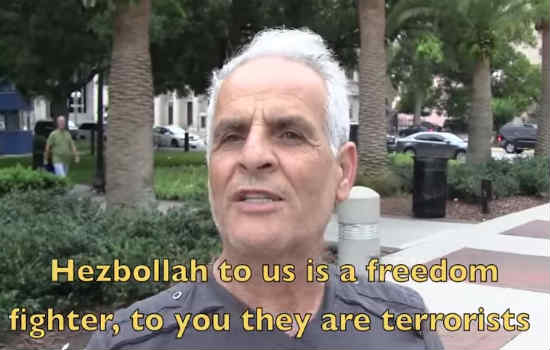 A recent video documents how Palestinian supporters in Orlando openly support a United States designated terrorist group called Hezbollah. Friends, these people are supporting our sworn enemies. I ask you, what does that make them?

These protestors gathered on “Jerusalem Day,” or in Arabic “al-Quds” Day, in July to express their support for the “Palestinians.” A brief synopsis of Al-Quds Day appears in the description of the video:

One can only assume the Orlando Muslim community knows very well what happens in Tehran on the last Friday of Ramadan since 1979.

The Islamic Republic of Iran, leader of the Islamic Revolution, Ayatollah Ruhollah Khomeini stole Yazdi’s idea, and on August 7, 1979, he declared the last Friday of the holy month of Ramadan each year as Quds Day, in which Muslims worldwide would unite in solidarity against Israel and in support of the Palestinians.

Everyone knows the liberation of Jerusalem means removing all Jews from Jerusalem and returning to the pre-1948 borders.

While they talk about freedom, they try to hide their anti-semitism and hatred of Jews.

The man with the bullhorn proclaims that they will gather every al-Qud’s Day, every year until oppression ends all over the world.

Interestingly, the cameraman catches what these Islamic supporters do when they think no one is looking. One of the people in the protest openly displays the Hezbollah flag and as the video is being taken another man is seen been pulled away by what appears to be his niece as she warns the man in Arabic, “Uncle, don’t talk with them. They are Jews.”

Then as the man who led the protest sees the other man who is holding the Hezbollah flag, he runs over and tells him, “Please don’t, they are recording.”

Hey, if you have nothing to hide, there should be no concern for video of the protest, right? After all, if we follow Obama’s claims, the only people who don’t want to disclose the truth, are people with something to hide.”

Then the man who was told the people videoing were Jews asks, “Are you a couple of Jews of something, what do you want to know?”

When he was asked why he was carrying the Hezbollah flag, he answered, “Why? Because they are freedom fighters.” The entire time he is speaking and answering questions, the protest leader keeps telling him not to talk to them.

The man filming says that they don’t want him speaking because he is “going off script.” He then asks him about Hezbollah.

“Hezbollah is a group,” he said. “They’re freedom fighters.”

He then, in Arabic, tells the protest leader to mind his own business and doesn’t seem bothered at all that his statements are being filmed.

After displaying the flag again, he is asked why he supports Hezbollah and then the double talk comes into play.

So in one breath he says Hezbollah are freedom fighters and in the next he says he doesn’t support Hezbollah, but supports the freedom fighters. See kids, this is why good moms and dads teach you not to lie, because when you start lying it’s hard to keep up with them after a while and Islamists, of which I have no doubt this man is one, are skilled in the doctrine of taqiyya (deceiving).

As he turns to walk away, he’s asked his name, to which he responds Shimon Peres.

The author of the video also speaks about the deception of the protest. “What makes me sick are the leaders of this Orlando Rally were trying to deceive all Orlando non-Muslims by calling this a rally for freedom. The fact of the matter is this Quds Day rally represents the destruction of Israel. The two Hezbollah supporters were the only two honest people there who were acknowledging Iran and Hezbollah in their support for Hamas and the Palestinians.”

Not one of the participants stood against the Hezbollah supporters. In fact, it could be said that the apparent leader wanted to keep it secret and not have it videoed and documented what they are supporting.

Friends, here’s the question: Why were their no God-fearing American Christians beating these people down? Why was there no opposition drowning out their support for Islamic terrorists? Where are those who have fought against these militant Islamists overseas? Why is there no investigation into these people who support declared terrorists by the Obama administration? After all, the Obama administration has no problem targeting and investigating law abiding Americans who simply call for the Constitution to be obeyed. It’s probably because Obama is courting Hezbollah.

My friends, this is not the time to remain silent. It is a time to speak and to speak loudly. It is not a First Amendment issue either. It is a time to confront the domestic enemies of America who reside in her borders… the Islamists, the Communists, the Socialists, Fascists and the Marxists and call them out for what they are and drown out their voices. There is nothing for us to fear from these people. We have the power to stop Islam in its tracks here in America, if we will only exercise that power.

“Son of man, speak to the children of your people, and say to them: ‘When I bring the sword upon a land, and the people of the land take a man from their territory and make him their watchman, When he sees the sword coming upon the land, if he blows the trumpet and warns the people, then whoever hears the sound of the trumpet and does not take warning, if the sword comes and takes him away, his blood shall be on his own head. He heard the sound of the trumpet, but did not take warning; his blood shall be upon himself. But he who takes warning will save his life. But if the watchman sees the sword coming and does not blow the trumpet, and the people are not warned, and the sword comes and takes any person from among them, he is taken away in his iniquity; but his blood I will require at the watchman’s hand.” –Ezekiel 33:2-6

Where are the courageous watchmen in Orlando?