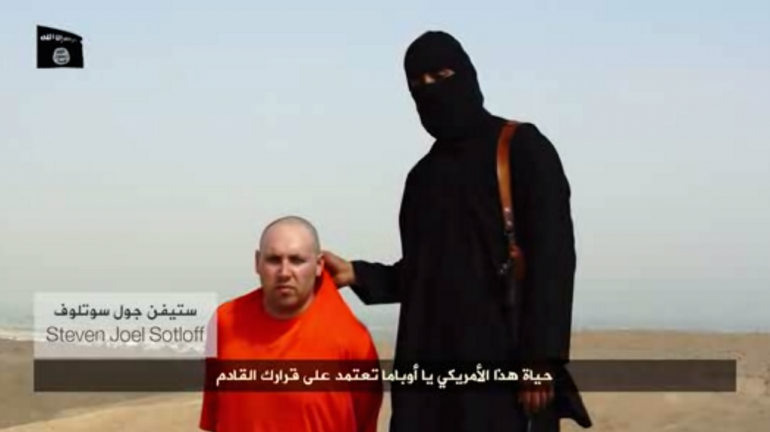 Brandishing the knife as he rants on the video, the murderer approaches Mr Sotloff from behind and snatches him by the chin.

His knife apparently slashes across the victim’s neck although – just like the Foley video – there is no sign of blood. Even though the shot lasts only seconds, the captive remains kneeling upright until his left leg shoots forward and he slumps. Again, the video then fades to black.

As you are aware by now, yesterday Steven Joel Sotloff became the second journalist beheaded by ISIS. The message they are sending is loud and clear. Before I go on, I want to step carefully because I mean no disprespect to the families of either Steven Sotloff or James Foley. I am not questioning whether they have been killed, but rather the production and purpose of these videos.

The Sotloff video seems to follow the same script which might suggest that the actual beheading was done off camera, and possibly not even by the same ISIS member who speaks to the camera.

It certainly appears that the knife being wielded in the video itself is simply for show.

For anyone who has ever witnessed an uncensored beheading video, you will recognize that this is not at all what they tend to look like. I have seen several and the appearance of blood is almost instantaneous to my recollection. I can’t say that with 100% certainty because those videos are always quickly removed and I have also never seen any that start a beheading without finishing it. But even if I am wrong on that point, let me ask you this question.

Could most people remain calm and collected as they read a propaganda statement just moments before they were to be beheaded?

I don’t think I could. I don’t know if I would be fighting or messing my pants (maybe both) but certain things with these videos just don’t seem right. Keep in mind that these men aren’t soldiers, they are journalists. But on execution videos I have watched, I have even seen soldiers beg for their lives prior to execution. I am not saying that any of this means a thing. But I do want to lay it out there so you can see and decide for yourself.