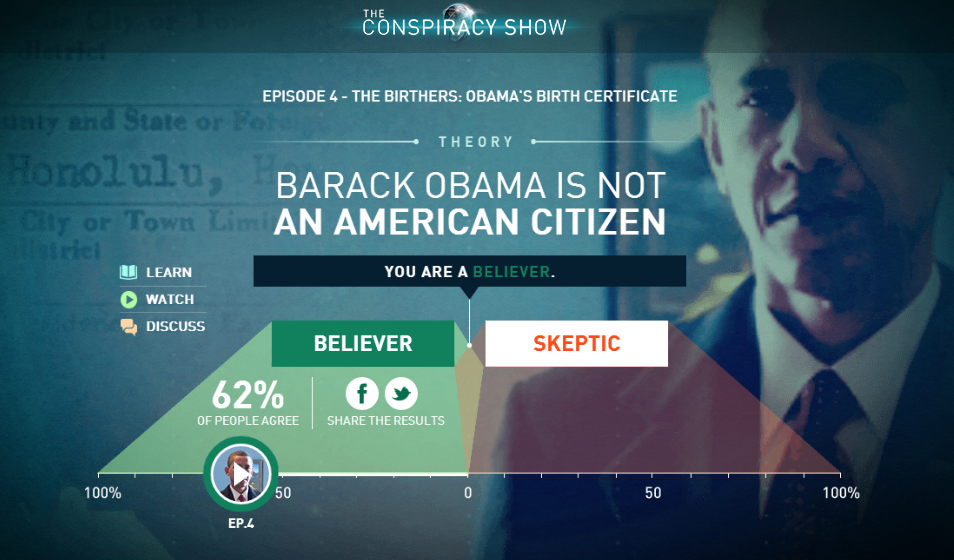 There are two definitive schools of thought within the “birther” movement. However, more often than not, you are exposed to only one. Not all “birthers” believe that Barack Obama was born in Kenya. In fact, many believe that this is somewhat irrelevant. Many, like myself, believe that since Barack Obama, Sr. was not a citizen of the United States when Barack Obama, Jr. was born that our President may be a “citizen” but that he is a not a “natural born citizen” and thus ineligible to hold the office of President.

Though it is doubtful that you will see any American owned media outlets devoting programs to this debate (seems highly unlikely six years later), Richard Syrett of The Conspiracy Show decided to go where American media refuses to. He devoted an entire episode of his program to this debate and it aired Monday on Canadian television.

Our friends at Birther Report summarize the broadcast:

As reported here Canadian broadcaster Richard Syrett interviewed Attorney Mario Apuzzo, Attorney Phil Berg, computer expert Karl Denninger and Allenna Leonard of Democrats Abroad. The show focused on Obama’s forged birth certificate and the Article II natural born Citizen clause in the U.S. Constitution. Full show below…The host says Birthers that conclude a natural born Citizen is one born on U.S. soil to two U.S. citizen parents (Vattel) stand on pretty solid ground but notes the other side could provide a compelling counter-argument (Blackstone). Syrett said to dismiss Birthers as racist is extremely unfair. He also believes evidence suggesting Obama’s birth certificate is a forgery is not conclusive but says it deserves further investigation and serious media scrutiny. Syrett warned viewers that if Obama is not eligible and he forged his birth certificate the United States would be plunged into a constitutional crisis unparalleled in its history. His full conclusion excerpted here…

You can watch the entire episode here. .

The debate over the definition of “natural born citizen” has largely been in trying to determine the intentions of our founders. Both sides can roll out historical court decisions to seemingly support their case, but I prefer to start at the beginning. What is perceived as true in 2014 was not necessarily true in 1790. I always encourage people to do their own research. However, in the course of that research I would suggest that you start with our first congress. My interpretation is that BOTH parents must be citizens to create a “natural born citizen.” If not then why the distinction between a simple “citizen” and a “natural born citizen?”

It is a logical question.

For what it is worth I don’t believe that Ted Cruz is eligible either, but you should do your own research and come to your own conclusions.

America will not grow stronger until people begin to think for and educate themselves.