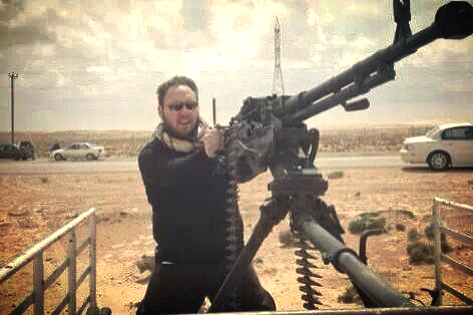 Could this possibly be a picture of Steven Sotloff, who was beheaded by ISIS earlier this week?

A photo tweet posted by “AzoozF” with an IS logo purportedly shows Steven Sotloff manning a truck mounted machine gun. It was posted on Wednesday. Arabic text accompanying the photo identifies the man as Sotloff.

So, again, is it Sotloff?

That judgment is not going to be easy to make for a variety of reasons, including the sunglasses and overall clarity of the shot. And, even if it is Sotloff, you must understand that he had grown very friendly with a number of dangerous people. So it could have been a “kodak moment.” Please understand that this is not being reported as fact, but rather being reported because the main stream media will likely ignore it.

It may or may not be Sotloff, and even if it is, it hardly proves anything. It would simply be a piece of a puzzle.

On Wednesday a tweet was published which clearly claimed the man in the picture was America’s latest deceased journalist.

I used Google Translate for the text and, though slightly unintelligible, much like yours truly, it is clear that there is a claim made that this is Steven Sotloff. The tweet also seemed to question if he was a spy rather than a journalist but, without a better translation, I can not be sure.

Interestingly enough, after the James Foley beheading, a top media spokesperson for Bashar al-Assad claimed that Foley had been killed a year ago.

The propaganda is in full flight.

You just never quite know which side is telling the truth.

I have found that the best policy is to assume both sides are lying and to look for the truth somewhere in between.