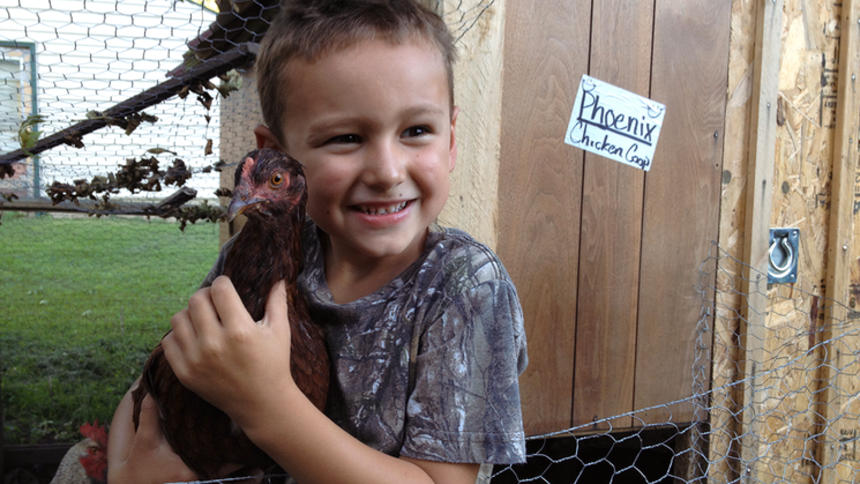 A cop in Atwater, Minnesota beheaded a 5-year-old boy’s pet hen – and left its head near the backyard chicken coop.

The boy’s mother, Ashley Turnbull, has filed a formal complaint against Police Chief Trevor Berger for trespassing on her property and killing her son Phoenix’s pet.

Turnbull said she knows she violated the city’s ordinance that prohibits fowl. She acknowledges she was told Aug. 7 by police to remove the three chickens and two ducks the family had in their backyard.

But she told the West Central Tribune that Berger went too far when he came onto her property about a week later, when nobody was home, and clubbed, killed and decapitated a small, red hen with a shovel.

“The chicken was like a puppy dog to my son,” said Turnbull. “You wouldn’t do that to a puppy.”

Wait until you hear Berger’s explanation for going on the Turnbull’s property and killing the hen.

He claimed to be enforcing an ordinance that has been in place since 1960 and was responding to a “frustrated” neighbor’s complaints about the chicken running loose in the area.

He said the killing was “justified”:

“It’s against city ordinance for a chicken to be in the city and running around in people’s yards. Chickens carry a lot of disease.”

Berger said he got a complaint call on Aug. 16. He said he saw the chicken in a yard next to Turnbull’s house, and that he tried for 10-15 minutes to catch the chicken or chase it back into the pen.

“I feel like I made a good effort to get it back in,” he said.

He claimed that the other two chickens and two ducks in the fenced pen started to get out, so he closed the door that he’d opened, grabbed a shovel leaning against Turnbull’s garage and “dispatched” the chicken.

Berger said he didn’t use his gun to kill the chicken because there were children playing in the adjacent yard. He felt the shovel was the “safest way to dispatch it.”

When Berger was asked why he felt it was necessary to kill the chicken, he said the family was “not supposed to have them in the first place” and that he wanted to give the frustrated neighbor “some results.”

“I guess I don’t regret it, because it’s like taking care of any rodent in town,” he said.

Most of us are – sadly – probably used to hearing about police officers killing pet dogs, but…a chicken?

“I couldn’t perceive a chicken being a threat to anybody,” said Turnbull.

I couldn’t have said that better myself. In fact, I can’t recall the last time I heard about a rogue chicken roaming a neighborhood and taking out a few kids.

Oh, wait – that’s because it has never happened.

“I said, so you came to our home and killed our chicken with our shovel?” said Gordon, retelling the  conversation. “He said, ‘Yup. Any questions?’ That’s the thing that makes me mad.”

When Ashley arrived at home, she discarded the chicken’s head before Phoenix could see it, but the neighbor’s child told him, “The cops killed your chicken!”

Turnbull said she didn’t take the city’s verbal warning to remove the animals seriously, but added that she never received anything in writing. She also said she was waiting to hear the outcome of an upcoming city vote on the ordinance. With it being possible that the animals would eventually be legal, she didn’t think it made sense to move them just yet.

Phoenix was given three baby chickens and two ducks as a birthday gift last spring. At the time, Turnbull was not aware that the city didn’t allow poultry.

Turnbull said Phoenix took care of the animals and played with them. He often pulled the chicken, named Carson Petey, in a small wagon and snuggled it “like a puppy,” she said.

Yesterday Berger apologized to Phoenix and said he didn’t realize the chicken was the boy’s pet:

“I honestly didn’t know that the chickens were his pets,” Berger said. “Once I found out they were his pets, I felt obviously terrible about what I had done.”

He also claimed he didn’t realize he left the chicken’s head in the yard, and said it wasn’t meant to be some kind of message to the family. He said he thought the head was still attached to the body when he carried it away.

Turnbull has moved Phoenix’s four remaining pets to a friend’s farm until she finds out if the city will decide to allow them.