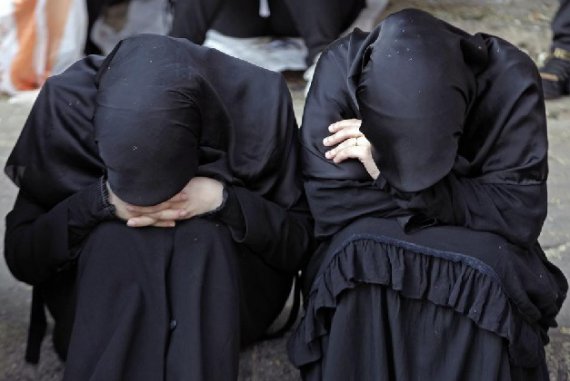 What a very sick world we live in. How can a Father disrespect his own son so much as to covet his wife? Furthermore, since the feeling is not mutual, what Father would go so far as to rape his own daughter-in-law and do it multiple times?

People keep making excuses for Islam and preach their politically correct tolerance but they fail to look at what is going on around them. This is not the religion of peace. It is the religion of pieces.

Not only did this man rape his son’s wife, but the local clerics have ordered that the victim must now act as the wife of a man who raped her multiple times, at gunpoint, while she treats her own husband as a son. This is not from one of those 98% Muslim states either. This happened in India which is roughly 80% Hindu. This is another case of the Muslim minority trying to take over. How’s that working out in Minnesota?

New Delhi: In a chilling reminder of the Imrana case, yet another young woman from Muzaffarnagar who allegedly fell victim to her father-in-law’s sexual assault faces a bleak future after mullahs declared that the husband of the victim will be treated as her son.

The 28-year-old victim alleged that her husband has been working in Dubai for the last two years and her father-in-law has been sexually assaulting her at gun point since 2013.

She remained silent because he used to threaten to kill her. He also video recorded his act and threatened to make it public if she opened her mouth.

When she told her husband about it, he blamed her for making a false allegation against his father.

When she finally told her parents, they suggested her to take legal action against her rapist father-in-law.

She created ruffles in the local administration and the Muslim community on Thursday by moving an application before District Magistrate Kaushal Raj Sharma to arrest her father-in-law and allow her to abort her seven-month pregnancy.

After the application by the victim, clerics jumped into the case and declared that the husband of the victim will be treated as her son.

This woman is now just another piece of Muslim meat to be passed around.

There you have it. This is what is known as Islamic justice. This is sharia law. This is sick and it is not compatible with the American way of life. Justify this with hugs and compassion all you want because they will be coming to rape your daughters and cut off your heads.

These things will happen more and more here unless Americans wake up. What is going on in Britain is a perfect example. Yesterday an elderly woman was beheaded in her own garden by a Muslim man. Local authorities are slow to call it a terrorist act. The man was running around with a machete for Pete’s sake. He was just looking to take someone’s head. But that is what is going on in the U.K. They keep making excuses and pretending the problem is not real.

So where does America go from here? States that pass anti-sharia laws have them overturned by judges and get fined in the process. The Obama administration is letting more and more of these idiots in through immigration policies and failure to secure the border.

Joe Biden says that he will follow ISIS to the gates of hell. Why would he have to when he and his boss are leaving the front door wide open for them?

I don’t know what is real and what is not anymore. A republican is now pushing to make Obama a dictator and eliminate the War Powers Act.

In all of this confusion, when so few seem to be on your side, I think it is important to keep things simple.

Make sure you have guns and ammo because none of us really know what evils might be coming our way.

We will not submit to this. This does not belong in America anymore than it belongs in India, or anywhere else.

This can not become common place in America. You can not remain complacent any longer. The fight is coming to you and you can no longer hide from it.