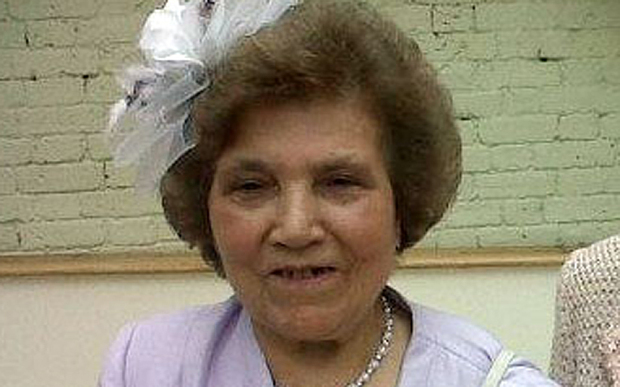 (Reuters) – An elderly woman was found beheaded at a house in a north London suburb on Thursday, British media reported, in an incident that police said did not appear to be terrorist related.

Officers said they were called to the house in Edmonton following reports of a man armed with a [machete], and found the woman’s body in the garden. She was named as 82-year-old Palmira Silva who detectives believe is of Italian descent. (Reuters)

Just a day after the Foley and Sotloff beheadings, a woman was found beheaded in Edmonton. Not five minutes after the woman, beheaded in her backyard in broad daylight by a “machete-wielding” man (like Lee Rigby) who had been menacing people in a number of backyards previous to the beheading, police stated firmly that it was not “terrorist-related.” How did they know that?

One witness has told Sky News a man was “fighting” with police.

Detective Chief Inspector John Sandlin, who is leading the investigation, described it as a “a highly visible attack in broad daylight”.

Clearly the Islamic State beheadings are the ….. inspiration.

It has been reported that the killer targeted more than one person, with other victims attempting to flee the scene in a car. A silver-grey Ford can be seen inside the police-cordon area with visible damage, and a smashed window.

An 82-year-old woman was beheaded in a north London garden after a crazed attacker went beserk with a machete.

Pensioner Palmira Silva was decapitated at her house in Edmonton in broad daylight in an apparent frenzied assault by a 25-year-old man who randomly targeted victims.

The horror scene unfolded as terrified eye witnesses saw the man, who was wielding a foot long blade, attack a passing vehicle and a cat before roaming back gardens for a victim.

Police believe the man also tried to attack two people at another address in Nightingale Road but they were able to escape without injury.

The man was arrested after armed police, who had distracted him to avoid other attacks, cornered him in a house and Tasered him, during which some officers were injured.

Ms Silva was pronounced dead at the scene.

One line of inquiry for detectives is now understood to be whether the man had been inspired by recent footage of the Isil beheadings of two US journalists in Syria.

However, detectives said they had ruled out terrorism as a motive for the killing.

Eye witnesses described a dramatic operation by police called to the scene in which officers were smashing windows of neighbouring properties lift screaming children and terrified residents to safety.

One neighbour told of her narrow escape and that she believed the attacker was a local man.

Catering worker Freda Odame, 30, said she heard a commotion and pulled back her curtains and saw a black man aged in his mid 20s.

“Someone was shouting and the door was banging. I could hear the screaming but I could not hear what he was saying,” she said.

“I could see that he had a big curved knife, about the size of an arm’s length and he was crouching as if frantically searching for something.

“He had a crazed look in his eyes so I closed my curtains because I was scared. My next door neighbour was in his garden but did not seem to realise anything was going on.

“I was just so very scared. Five minutes after I heard him screaming the police knocked on my door and told me I had to get out.”

Neighbour Sue Mahadooa, 50, who saw police cars screech to a halt outside her home, said officers were running down the street shouting at people to get out of their homes.

Officers with battering rams began breaking down front doors and smashing windows to help neighbours to safety, unaware of which property the killer was in.

Ms Mahadooa said the house at which it is believed the woman was killed in the back garden is split into three maisonettes and police were desperate to get residents out of the flats without sending them into the corridor of the property.

“These officers ran up and started trying to help these two children and a woman out of the little top window of the ground floor,” she said.

“The woman couldn’t get through the window so they started smashing the bigger one, but then I saw them get her out of the front door.

“She was very frightened. The kids were crying and looked very scared. There was clearly something awful going on inside the house.”

George Stylianou said: “Policewomen were sprinting past us and screaming at us ‘get back – you don’t understand how dangerous this man is.’

“Then we saw that policemen were running along the road dragging women and children out of windows – they had to smash windows to drag women out.”

Ahmed Yusuf, 19, said: “At first there were two police cars, then all of a sudden there were 20.

“The police said to drop everything. I said ‘What’s going on?’ and they said there’s a guy jumping over gardens.”

Earlier one witness had Tweeted: “Madman on the loose with a machete in Edmonton”.

Edmonton MP Andy Love said: “I am absolutely horrified and stunned by what has happened in my constituency.

“This is a relatively solid community with relatively good relations between all of the people living there. It comes as a shock that it has happened.

Mini cab driver Ricardo Kwiek, 23, told of how he saw a young man fighting with police before being bundled into a van.

“There were policemen trying the front door and the back. The chap inside wasn’t letting them in,” he said.

“They got in the back door. They came out with a man who was struggling and fighting.

“He wasn’t giving up. I could see loads of police fighting with him. They all piled on top of him and arrested him.

Metropolitan Police Commander Simon Letchford said: “Officers who attended the scene evacuated a number of those people from those premises to make them safe.

“During that period they distracted the man from carrying out any further attacks.”

He said his officers had done “everything they could to evacuate people from those premises and that clearly they were aware of what had happened and they put themselves in extreme danger to protect the public, to ensure that his behaviour was stopped as soon as it possibly could be”.

DCI John Sandlin, who is leading this investigation, said: “This is was a highly visible attack in broad daylight on a residential street. I can understand why this may cause people concern, however we are confident that we are not looking for anyone else at this stage.

“Whilst it is too early to speculate on what the motive behind this attack was I am confident, based on the information currently available to me, that it is not terrorist related.”