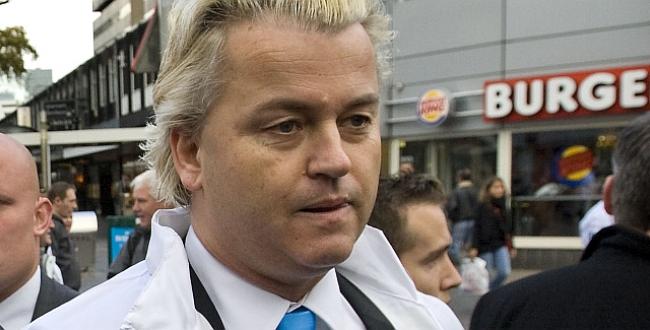 While US politicians coddle the Islam ideology, engage in taqiyyah regarding Islam and in general practice Islamic PC, ISIS advances and threatens all non-Muslims. The US government allows those citizens who leave our country to fight alongside ISIS re-entry with impunity back into the US, increasing the jihad threat in America. British Prime Minister David Cameron is exploring measures to keep British Muslims from leaving the UK to fight alongside civilization’s enemies, as if that is going to lessen the threat to Britain. Dutch lawmaker and head of the “Party for Freedom” (PVV), Geert Wilders indicates in his address to parliament in the Hague, Netherlands that those who are supportive of ISIS, wishing to fight in Iraq and Syria, should be allowed to leave and never return.

According to CNSnews.com, Wilders, once put on trial for his views on Islam, expressed to the Dutch parliament in his address, “Anyone who expresses support for terror as a means to overthrow our constitutional democracy, as far as I’m concerned, should leave the country at once. If you are waving an ISIS flag, you are waving an exit ticket. Leave!”
Wilders disagrees with the British prime minister’s approach of trying to keep jihadis from leaving the country to go fight with ISIS.

Very plainly and succinctly, Wilders firmly stands his ground on his ideas of how these citizen jihadis should be treated.

“Let them leave, with as many friends and family members as possible. I will go to Schiphol (airport) to wave them goodbye, if that helps. But, don’t let them ever come back – that’s the condition. Good riddance.”

“Deprive all jihadists of their passports – even if they only have a Dutch passport. Let them take an ISIS passport,” Wilders declares.

Wilders has been harshly criticized over the years for his warnings about Islam. However, it appears the rise of ISIS is vindicating Wilders by confirming his warnings. In 2008, Wilders was vilified and prosecuted for a documentary entitled “Fitna” (meaning strife in Arabic) which “interspersed passages from the Qu’ran with footage of terror attacks, along with clips of Muslim clerics endorsing violence.” Turning on the news these days, Wilders claims anyone can watch on television what his documentary covered as the world is witness to a “clash between barbarism and civilization.”

Despite Wilders’ best efforts, the Dutch government is much like our own – downplaying the threat of jihad and Islam. But just like in America, Dutch Muslims are displaying the flag of ISIS and jihad. Rallies are being conducted in the Netherlands with Muslims chanting “death to Jews” while waving the ISIS banner. But, the Dutch government claims that these “jihadis” are small, insignificant groups with Wilder citing a poll showing “73 percent of Dutch respondents of Moroccan and Turkish origin regarded those who go to fight in Syria as ‘heroes.'” Granted, the poll addressed Muslims going to fight in the civil war in Syria; however, it would be a logical assumption they would be “heroes” fighting with ISIS for the creation of a caliphate.

Wilders teaches the truth about Islam. Unfortunately, a Dutch court instructed prosecutors to indict him for “inciting hatred and discrimination.” Wilders was even denied a visa to enter Britain in the past.

All of this sounds eerily familiar, doesn’t it? Speech about Islam, contradictory to the propaganda, is hateful and discriminatory, deserving of punishment when it is the truth found in the teachings of Islam. The only ones who get upset at the “truth” regarding Islam are Muslims, Muslim supporters and the multicultural left leaning liberals.

Because of the “controversy” surrounding what is now termed “foreign fighters” – a term describing citizens of other nations traveling to fight alongside ISIS – Obama will be hosting a United Nations Security Council session on the issue. What business does the UN have to meddle in how nations deal with traitors and insurgents? The UN is not responsible for the security of the United States or any other nation. Each nation is responsible for its own security, immigration and naturalization laws and laws dealing with revocation of citizenship. It’s best the UN steer clear of trying to interfere with a free, constitutional republic.

Wilders has the right idea when it comes to citizenship regarding those who leave to fight alongside ISIS – revoke it and do not allow them re-entry. He is also spot on in regard to Islam, along with many who have been warning the US and the world about this barbarous political system. He refuses to back down into the political correctness game or engage in propaganda. For that, he has been targeted by Muslim clerics urging Muslims to kill him by beheading for denigrating Islam.

Some, in the Netherlands, may be waking to the dangers of Islam as Wilders’ party won the third most votes of the 11 parties that entered the Dutch parliament, in the most recent general election.

While Obama, his ilk, and the other Muslim trash occupying positions in the US government continually try to downplay Islam and the threat it poses, people are waking up – slowly, but they are waking. In the meantime, US citizens should make it loud and clear to Congress that the UN, nor any other country for that matter, has no business meddling in the laws of sovereign nations to include when to revoke citizenship; and, Congress should communicate that loud and clear to the UN.

Geert Wilders is standing strong for the Netherlands, despite being criticized, vilified and prosecuted. Is there a “Geert Wilders” somewhere in our Congress? So far, Michele Bachmann is fighting to revoke citizenship for those fighting alongside ISIS. But, America needs a member of Congress to tackle the truth about Islam and proclaim it without shame, in the same manner as Wilders. Unfortunately, America may be waiting a long time.

It is time the US declare that those who stand in support of ISIS and Islam leave this nation as American values are incompatible with Islam or be prepared to be treated as enemy combatants. Those in support of the establishment of the caliphate should be more than willing to leave and live under Islamic ISIS rule – take your friends and family with you – as this is what is being supported. Any US citizen who leaves to fight alongside ISIS should plan on never returning – you are not welcome in the US. ISIS has declared the US its enemy; those citizens fighting with ISIS are enemies of the US. No one is forcing you to stay or even asking you to reconsider. Make your choice and pack your bags for good. Many will be there to wave you goodbye and good riddance.