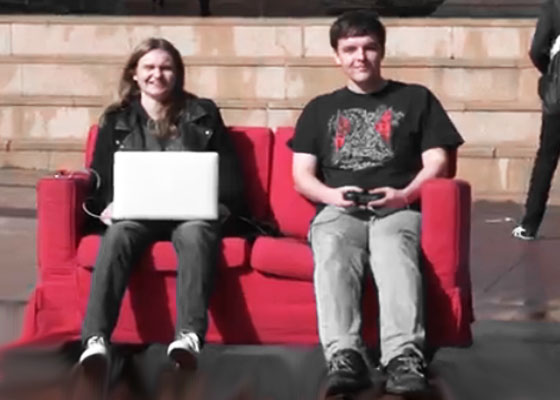 It’s kind of ironic, if you think about it…

On the same day that China announced that robots will replace their factory work force in both the chemical and steel sectors, the Drudge Report also highlighted some novel “progress” that was made for humans, too.

In Guangzhou, China, the bosses brag that the robots make ideal employees:

Efficient, working 24-7, no need to talk, eat, or drink, and best of all, you don’t have to pay them. There are more benefits to having robots working for you. They don’t get hurt.

At least 180,000 such industrial robots have already been deployed, many of which ended up in China.

Meanwhile, the Western world is working on…

The ‘robot couch that can drive you to the fridge and back‘! At last, the promised utopian future is here?

This, making your basic reclining lazyboy a bit of a thing of the past. The slacker-esque Australian engineers who came up with it have the cushioned mobile remote controlled and revved up to go some 9 miles an hour.

But the real question… why?

It’s developers hope it can someday traverse down narrow passageways and up freight elevators. It’ll probably even be able to tell your “smart” fridge what you want by the time you get there, and how many calories are in it. But again, why?

I guess the average consumer-human is becoming lazier, more dependent and less useful than ever with each passing day.

Worse, I suppose we’re going to literally sit there and take it… that is, if the robot couch is any indication of where we’re headed.

The general trends have been aimed in this direction for a while.

and the Singularity crowd

have called it for several decades now – even cheering it on enthusiastically. The “future doesn’t need us

With a steadily declining value on human labor, no real cultural “vision” or “purpose” and an economy tending towards silicon intelligence and replacement by robotics, we are basically toast. Or, as Bill Joy (or was it Perry Farrell?) summed it up: expendable pets.

nailed it – a future where the robots are seeding new life and restoring the planet, while the humanoids have become rotund, couch potato slobs who suck down ‘big gulp’ super sodas from autonomous roving arm chairs. Definitely highly-entertained “hangers on.” The ship’s “captain,” finding himself obsolete and without any meaningful purpose, redeems himself by making himself useful in the face of the directive of the computer running the ship. Hmm…

Here’s a glimpse of that possible dreary, dystopic future in one image: 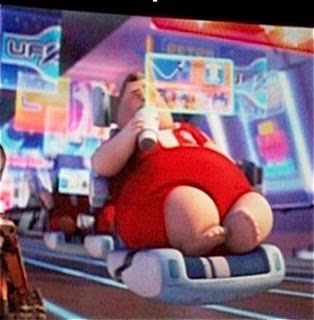