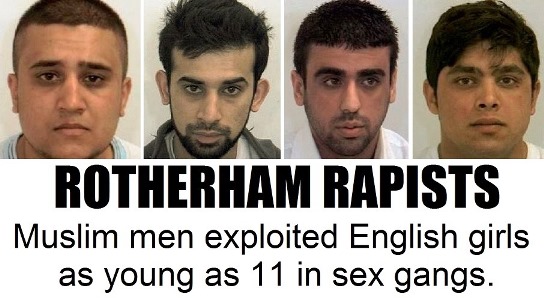 As shocking as the Muslim-run sex ring in Rotherham, England may seem to some—1,400 British children as young as 11 plied with drugs before being passed around and sexually abused in cabs and kabob shops—the fact is that this phenomenon is immensely widespread.  In the United Kingdom alone, it’s the fifth sex abuse ring led by Muslims to be uncovered.

Some years back in Australia, a group of “Lebanese Muslim youths” were responsible for a “series of brutal gang rapes” of “Anglo-Celtic teenage girls.” A few years later in the same country, four Muslim Pakistani brothers raped at least 18 Australian women, some as young as 13.  Even in the United States, a gang of Somalis—Somalia being a Muslim nation where non-Muslims, primarily Christians, are ruthlessly persecuted—was responsible for abducting, buying, selling, raping and torturing young American girls as young as 12.

The answer is a centuries-long, continents-wide account of nonstop sexual predation.  Boko Haram’s recent abduction and enslavement of nearly 300, mostly Christian, schoolgirls last April in Nigeria is but the tip of the iceberg.

The difference between what happens in Nigeria and what happens in Western nations is based on what I call “Islam’s Rule of Numbers.”  Wherever Muslims grow in numbers, Islamic phenomena intrinsic to the Muslim world—in this case, the sexual abuse of “infidel” children and teenagers—comes along with them.

Thus in the United Kingdom, where Muslims make for a sizeable—and notable—minority, the systematic rape of “subhuman infidels” naturally takes place.  But when caught, Muslim minorities, being under “infidel” authority, cry “Islamophobia” and feign innocence.

In Nigeria, however, which is roughly 50 percent Islamic, such “apologetics” are unnecessary.  After seizing the nearly 300 schoolgirls, the leader of Boko Haram appeared on videotape boasting that “I abducted your girls. I will sell them on the market, by Allah….  There is a market for selling humans. Allah says I should sell.”

It’s the same in Pakistan—the nation where many of the United Kingdom’s Muslims, including the majority involved in the Rotherham sex ring, come from.  See this article for a long list of Christian children—as young as 2-years-old—who were targeted by Muslim men for abduction, enslavement, and rape.  In every single case, police do nothing except sometimes side with the Muslim rapists against their “infidel” victims.

For example, last Easter Sunday, four Muslim men gang-raped a 7-year-old Christian girl named Sara, leaving her in “critical condition.”  According to Asia News, “the police, instead of arresting the culprits, helped the local clan to kidnap the girl’s father… to ‘force the family not to report the story, to reach an agreement with the criminals and to avoid a dispute of a religious background.’”

As for systematic child grooming, in 2010, Kiran George, a Christian girl who was “enslaved by a woman, Sama, a dealer of youth to be sold as prostitutes or slaves to wealthy Muslim families,” was doused with gasoline by a police officer involved in the sex ring, set on fire, and burned to death.

And a recent report confirms that “an estimated 700 cases [of abduction, enslavement, and/or rape in Pakistan] per year involve Christian women, 300 Hindu girls”—very large numbers when one considers that Christians and Hindus each make for one percent of the population of Pakistan, which is about 97 percent Muslim.

One can go on and on.  In 2011 a Christian group in Muslim-majority Egypt

exposed a highly organized Muslim ring centered in the Fatah Mosque in Alexandria. The investigation also uncovered a systematic “religious call” plan, where young Muslim males in high school and university are urged to approach Coptic girls in the 9-15 age group and manipulate them through sexual exploitation and blackmail. The plan … aims at sexually compromising Christian girls, defiling them and humiliating them in front of their parents, thereby forcing them to flee their homes, and use conversion to Islam as a “solution” for their problems.

Approximately 550 Coptic Christian girls have been abducted and sexually abused by Muslim men during the last three years—especially under the Muslim Brotherhood’s aegis, when sexual crimes were particularly widespread.

So what animates this phenomenon of Muslim on non-Muslim rape?  And we must call it Muslim rape since Islam is the common denominator in all these cases from otherwise diverse nations that have little in common except for large numbers of Muslims.

As for the pedophilia aspect, Muhammad—the prophet of Islam whom the Koran exhorts Muslims to emulate in every possible way—was “betrothed” to a six-year-old girl, Aisha, “consummating” their marriage when she was nine-years-old.   Accordingly, Islam’s clerics routinely defend child “marriage”—sometimes even if the girl is still in the cradle—based on the example of the prophet.

As for the subhuman treatment of “infidel” children, this is seen as a right by supremacist Muslims.  Discussing the 2010 rape of a 9-year-old Christian girl, local sources in Pakistan put it well: “It is shameful. Such incidents occur frequently. Christian girls are considered goods to be damaged at leisure.  Abusing them is a right. According to the [Muslim] community’s mentality it is not even a crime. Muslims regard them as spoils of war.”

“Spoils of war” is quite correct. Here is how the late Majid Khadduri, “internationally recognized as one of the world’s leading authorities on Islamic law and jurisprudence,” explained the idea of “spoils” in his War and Peace in the Law of Islam:

The term spoil (ghanima) is applied specifically to property acquired by force from non-Muslims. It includes, however, not only property (movable and immovable) but also persons, whether in the capacity of asra (prisoners of war) or sabi (women and children). … If the slave were a woman, the master was permitted to have sexual connection with her as a concubine.

Nor is this limited to academic talk.  Last year, Jordanian Sheikh Yasir al-‘Ajlawni  said Muslims fighting to topple “infidel” president Bashar Assad in Syria are permitted to “capture and have sex with” all non-Sunni women, including Shia Muslims, Alawites, Christians, Druze, and Yazidis.

In order to eliminate sexual immorality from among male Muslim youth, Kuwaiti political activist Salwa al-Mutairi suggested the formal reinstitution of sex-slavery—not unlike what was recently exposed in Rotherham.  She said on video that Islam’s greatest authorities from Mecca, the city of Islam, all confirmed the legality of sex-slavery to her.  According to the Kuwaiti woman:

A Muslim state must [first] attack a Christian state—sorry, I mean any non-Muslim state—and they [the women, the future sex-slaves] must be captives of the raid. Is this forbidden? Not at all; according to Islam, sex slaves are not at all forbidden. Quite the contrary, the rules regulating sex-slaves differ from those for free women [i.e., Muslim women]: the latter’s body must be covered entirely, except for her face and hands, whereas the sex-slave is kept naked from the bellybutton on up—she is different from the free woman; the free woman has to be married properly to her husband, but the sex-slave—he just buys her and that’s that….  For example, in the Chechnya war, surely there are female Russian captives. So go and buy those and sell them here in Kuwait; better that than have our men engage in forbidden sexual relations. I don’t see any problem in this, no problem at all.

What happened in Rotherham is hardly an aberration.  Rather, it is Islam coming to town, Muslims growing in numbers.   Even Dr. Taj Hargey, a British imam, just confirmed that the majority of the UK’s “imams promote grooming rings.”  He said Muslim men are taught that women are “second-class citizens, little more than chattels or possessions over whom they have absolute authority” and that the imams preach a doctrine “that denigrates all women, but treats whites with particular contempt.”

Raymond Ibrahim is a Middle East and Islam specialist and author of Crucified Again: Exposing Islam’s New War on Christians(2013) and The Al Qaeda Reader (2007). His writings have appeared in a variety of media, including the Los Angeles Times, Washington Times, Jane’s Islamic Affairs Analyst, Middle East Quarterly, World Almanac of Islamism, and Chronicle of Higher Education; he has appeared on MSNBC, Fox News, C-SPAN, PBS, Reuters, Al-Jazeera, NPR, Blaze TV, and CBN. Ibrahim regularly speaks publicly, briefs governmental agencies, provides expert testimony for Islam-related lawsuits, and testifies before Congress. He is a Shillman Fellow, David Horowitz Freedom Center; a CBN News contributor; a Media Fellow, Hoover Institution (2013); and a Judith Friedman Rosen Writing Fellow, Middle East Forum . Ibrahim’s dual-background — born and raised in the U.S. by Coptic Egyptian parents born and raised in the Middle East — has provided him with unique advantages, from equal fluency in English and Arabic, to an equal understanding of the Western and Middle Eastern mindsets, positioning him to explain the latter to the former.