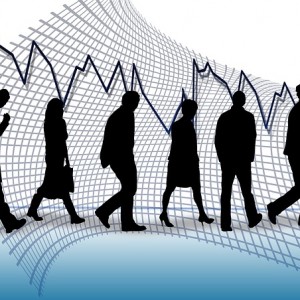 Should we be concerned that the percentage of Americans that are either working or looking for work is the lowest that it has been in 36 years?  In August, an all-time record high 92,269,000 Americans 16 years of age and older did not “participate in the labor force”.  And when you throw in the people that are considered to be “in the labor force” but are not currently employed, that pushes the total of working age Americans that do not have jobs to well over 100 million.  Yes, it may be hard to believe, but there are more than 100 million working age Americans that are not employed right now.  Needless to say, this is not a sign of a healthy economy, and it is a huge reason why dependence on the government has soared to absolutely unprecedented levels.  When
people can’t take care of themselves, they need someone else to take care of them.  If the percentage of people in the labor force continues to decline like it has been, what is that going to mean for the future of our society?

The chart below shows the changes in the civilian labor force participation rate since 1980.  As you can see, the rate steadily rose between 1980 and 2000, but since then it has generally been declining.  In particular, this decline has greatly accelerated since the beginning of the last recession… 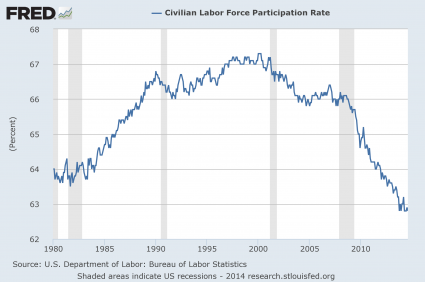 We have never seen an extended precipitous decline of this nature before.  But instead of admitting that we have a very serious problem on our hands, many mainstream economists are dismissing this decline as “structural in nature”.  For example, check out the following excerpt from a recent Reuters article…

A paper published on Thursday by the Brookings Institution, a Washington-based think tank, suggested the decline was primarily due to an aging population and other structural factors, and concluded the labor force would continue to shrink.

But there is a major flaw in this analysis.  It turns out that older Americans are the only group for which employment numbers have actually been going up.  I really like how Zero Hedge made this point the other day…

Well that’s very odd, because it was only two months ago that the Census wrote the following [5]: “Many older workers managed to stay employed during the recession; in fact, the population in age groups 65 and over were the only ones not to see a decline in the employment share from 2005 to 2010 (Figure 3-25)… Remaining employed and delaying retirement was one way of lessening the impact of the stock market decline and subsequent loss in retirement savings.” 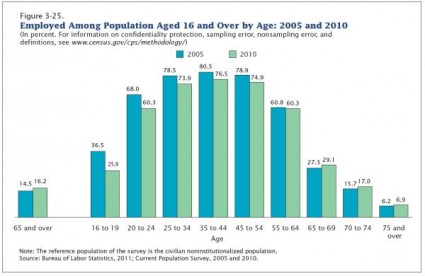 But that does not explain why the labor force participation rate numbers for younger groups have been going down.

Each month, the U.S. economy has to add somewhere between 100,000 and 150,000 jobs just to keep up with population growth.  Since job creation has been tepid at best in recent years, the only way that the government has been able to get the official unemployment rate to steadily “go down” has been to remove millions upon millions of Americans from the labor force.

As a result, the official unemployment rate has magically been “declining”.

But the truth is that our employment crisis has not been solved at all.

And it isn’t just the number of jobs that we need to be concerned about.  We are also dealing with a multi-year decline in the quality of our jobs.  In fact, the Wall Street Journal just reported that 34 percent of all U.S. workers are “freelancers” now…

More evidence that this isn’t your parents’ labor market: Roughly one in three U.S. workers is now a freelancer.

Fifty-three million Americans, or 34% of the nation’s workforce, qualify as freelancers, according to a new report from the Freelancers Union, a nonprofit organization, and Elance-oDesk Inc., a company that provides platforms for freelancers to find work. These individuals include independent contractors, temps, and moonlighters, among others.

In other words, about a third of all workers in the country are “temps” at this point.

I don’t know about you, but to me that is an extremely alarming statistic.

If the economy really was recovering, this would not be happening.

And as millions upon millions of Americans are being forced out of the official labor force, an increasing number of people are turning to the underground economy.

For example, in some of our major cities we are witnessing a rise in the number of street vendors.  The following is an excerpt from a recent Los Angeles Times article entitled “More Angelenos are becoming street vendors amid weak economy“…

Sitting at her street vending booth with products arrayed neatly on a sequined purple tablecloth, Jackie Lloyd reflects nostalgically on the days when she had a steady salary and regular hours.

That was four years ago, before the 39-year-old was laid off from her job as an elementary school cafeteria worker and mounting bills forced her to venture into self-employment.

Now the Pico-Union resident hops from location to location, selling body oils, shea butter, soap and incense. She moves when nearby businesses complain or she feels unsafe.

If our labor force participation rate continues to fall and the quality of our jobs continues to decline, the middle class will continue to shrink.  For much more on this, please see my previous article entitled “30 stats to show to anyone that does not believe the middle class is being destroyed“.

But our authorities never seem to want to admit what our real problems are.

Instead, they love to come up with alternative theories for our economic struggles.

One of the great mysteries of the post-financial crisis world is why the U.S. has lacked inflation despite all the money being pumped into the economy.

The St. Louis Federal Reserve thinks it has the answer: A paper the central bank branch published this week blames the low level of money movement in large part on consumers and their “willingness to hoard money.”

This seems completely absurd to me.

From what I can see, most families are just doing their best to survive from month to month these days.

I certainly don’t see a lot of people “hoarding money“.