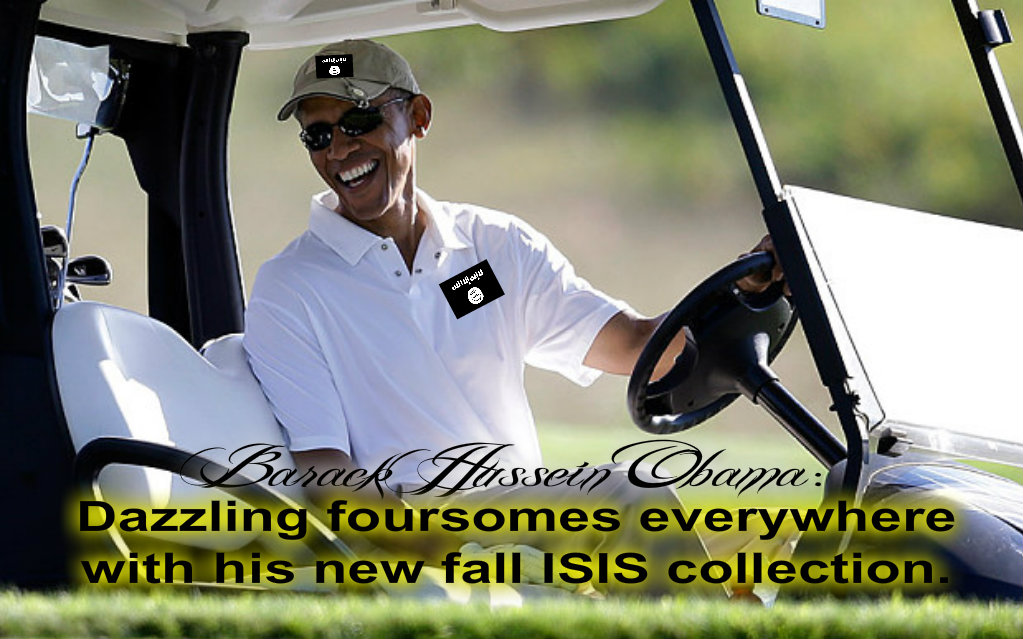 Obama said that he will brief congressional leaders on Tuesday and the nation on Wednesday to explain, stutter, vacillate, and stumble through his plan for the Islamic State, which is waging jihad across the Middle East and now controls whole swathes of Iraq and Syria.

Obama said he did not expect to ask Congress for approval to act and restated his opposition to deploying US ground troops, saying the plan would be similar to counter-terrorism campaigns waged over the past six years…. (more)

More likely,  Wednesday’s speech is a CYA speech for when the inevitable terrorist attack happens in the homeland.

Nonie Darwish,  former Muslim and brave voice for freedom, has written a speech on what Obama should say, but never will.

An ISIS Speech For Obama

I volunteer as a speech writer for the Radical-in-Chief.
By Nonie Darwish

Author’s note: The speech below was written by me for Obama for one of his upcoming addresses on ISIS. Hopefully he will use it, because it is what America needs to hear from our president today. Such a speech is what the Muslim world needs to hear instead of what it heard from Obama six years ago in Cairo.

When I got elected president of the United States, I promised I would change the relationship between the Muslim world and America. That promise was based on my assumption that I understood the Muslim culture and religion better than any prior American president, because I grew up in Indonesia and went to Islamic school. To me, dealing with the Muslim world was a no brainer.

Instead of starting my presidency with a monumental speech thanking the American people for electing me, their first black president, and launching a new dawn in the healing of America from the ravages of race relations, I chose to give my most important first speech to the Muslim world in Cairo. I told them everything they needed to hear. I gave them the respect they desperately needed, and even bowed to his majesty, the King of Saudi Arabia. This all came at a cost to my popularity among my own forgiving citizens and my standing in the world.

I was willing to negotiate unconditionally with Iran and refused to take sides in their civil unrest. I removed every reference to Islam’s connection to terrorism from all of US government documents and labeled terrorist acts on my own military personnel at Fort Hood as “workplace violence.” I did not respond to Islamists who embarrassed me before my re-election, when I blamed their attack on the Benghazi consulate and murder of 4 American officials on a video and not on Islamic terror.  I made sure to lift up the spirits of the Muslim people even at the expense of my own people. I accused my opposition of being racists and allowed my attorney general to tell Americans that they are a “nation of cowards.”

But to my surprise, nothing worked. Today, the Middle East still hate us, is in flames and radical Islam is empowered like never before. The first radical Islamic State was launched during my presidency and the people of Egypt, to whom I spoke 6 years ago, are now calling me Satan and terror supporter. I also have lost the respect and confidence of many Americans, US allies and even our enemies.

I now declare that I am a changed man and it is not too late for America. I now declare that the problem we face in the world today is not the US, but Islam, period. US policy towards the Middle East was at worst imperfect and confused, but its failures fall squarely on the shoulders of a Muslim world unable to live in peace, neither with itself nor with the rest of the world. It is time for moderate Muslims to take control of their Islamic states if they are truly the majority and the terrorists are truly the minority.

The king of Saudi Arabia and the United Arab Emirates are warning us that ISIS will attack Europe in a month and the US in two months. This is my response to them: Enough trying to scare us into doing your dirty work for you, while you come out smelling like a rose. You have no control over your jihadists because jihad is a basic educational requirement for a Muslim and the Muslim head of state. If it is true that moderate Muslims reject jihad as violence and war and are truly the majority, and terrorists are the minority, then you should have no problem with crushing Islamic terrorism. But somehow your Muslim leaders seem helpless and refuse to be open with your own people about condemning jihad by name. You keep financing it while winking at terror groups to do their jihad obligation against the outside world rather than within your kingdom. Moderate Muslims are not acting with the confidence of a majority and you keep pandering to the jihadists at the expense of the safety and security of America.

We in America will not play this game anymore. It is up to you to prove to us that moderate Islam is the majority and that you are capable of handling it, otherwise we in the West must take the terrorists’ word that Islam has declared war on us.

I agree with the solutions of the British Prime Minister, David Cameron, but I will even go further. The following are executive orders effective today:

1-  Citizenship of Naturalized Americans who join terror groups to fight against our nation will be revoked and their passports confiscated.

2- Assimilation of Muslim immigrants already inside the US is a requirement for citizenship.

3-      All Muslim immigrants must declare they have renounced Sharia Law and those who do not wish to do so will be deported.

4-      Muslim Groups sympathetic to ISIS and other Islamic terror groups will be dissolved immediately.

5-      Religious visas and immigration from Muslim countries must be brought to a halt until Islamic terrorism is defeated.

6-      Since Islam as it is practiced today, is more of a political ideology than a religion, all permits to build mosques must be placed on hold until further notice.

7-      We demand equal access inside the Muslim world. If Saudi Arabia can build mosques in the US, then the US must be able to build churches, synagogues or temples inside Saudi Arabia. Access for access will be our policy.

8-      Any religion that condemns its followers to death for leaving it would be declared illegal to operate inside the US.

9-      Drilling for oil and building refineries on American soil is a matter of national security and must start immediately for the benefit of America and its allies.

I Barack Hussein Obama declare that the above would be my most important legacy as the first black president of the United States of America.