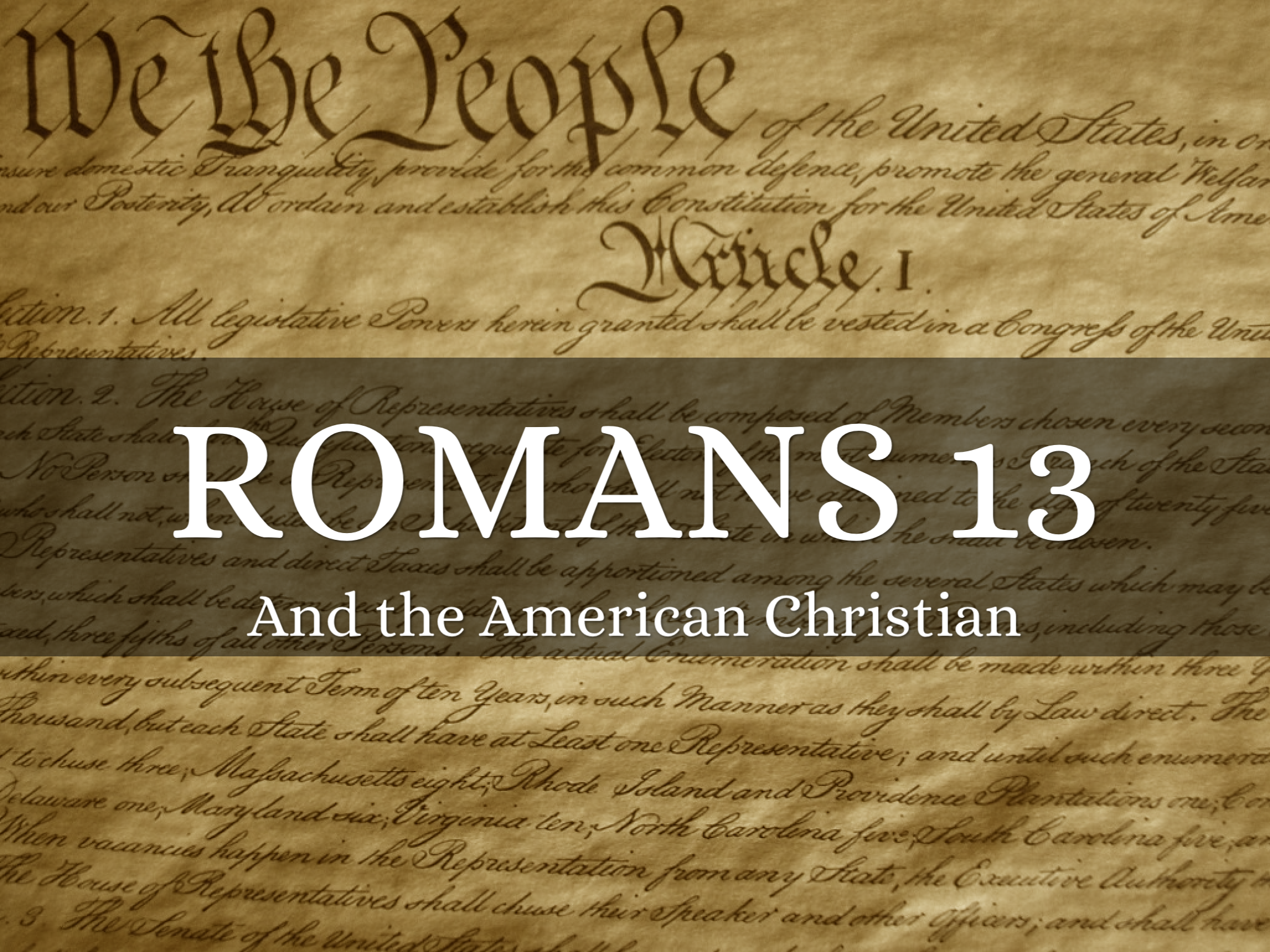 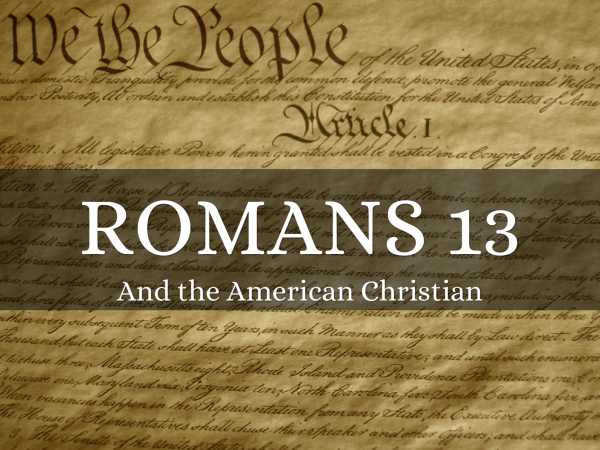 If you are a Christian Patriot I do not have to tell you the significance of the Romans 13 debate. You already know the significance. The interpretation of this passage means the difference of whether we sit and watch our country being destroyed, or if we are allowed to rise up against our oppressors. I have fought this battle in my own heart and mind for the better part of two years and I am only now starting to find some clarity on the subject.

I am by no means a Biblical expert. I was raised Roman Catholic and was somewhat behind the curve with the understanding of scriptures. We simply did not read the Bible much in my house. To this day I am still trying to catch up. However, even when an exact Biblical reference does not come to mind, my belief is that Christians have an inert ability of discernment that is a gift from God. When all else fails we have a sense of right and wrong that will overcome the lies we are fed. I believe this is simply a matter of God protecting His Children just as we do with the lessons we teach our own children.

I need you to take this all with a grain of salt. I am not a foremost expert on all things Biblical. However, I do suffer the frustration that many do with understanding this scripture. So many use it to try to shut down any argument about the possibility of rising up against one’s government. What follows is simply my opinion and a few reference points that have guided me in my understanding.

Can I trust my Pastor?

In this case I believe that the majority of Churches have been lying to us for many years. There is a complicity found in today’s Churches that has everything to do with money and our federal government. Let’s call it what it is. Most of today’s Churches are businesses. We won’t get into that too much today but if you want to explore this issue you might read this article by Dave Hodges in which he explains why your Pastor is probably not your friend. Or, here is one by Tim Brown which is an expose on Pastors who have freely admitted that they do not take on certain topics because such topics are too controversial. (more controversy = less money in the collection plate)

The bottom line is that we don’t really know where to turn anymore, because the Church has grown increasingly corrupt. This is one of the reasons I now call myself a non-denominational Christian. I believe that Jesus Christ is my Lord and Savior. I believe in The Word. I don’t believe in man-made religions and religious sects that have proven throughout history that they can not be trusted to remain free of corruption.

So what is the correct interpretation of Romans 13?

That is what we all want to know.

I’m going to share a few resources with you so you can come to your own conclusions. My personal opinion is that Romans 13 teaches the complete opposite of what most people believe. I don’t believe it commands us to “stand down” or bow to the authority of the state. I believe it commands us to rise up against a state that has become tyrannical. And just so we are clear, I do believe this includes bearing arms against the state when necessary.

Recently Theodore Shoebat wrote about Christians in Iraq who have had their fill of the persecution and are opposing ISIS. Beyond being a feel good story of Christian militias in Iraq, there are lessons to be learned. After ISIS, or the Islamic State, took control over their land, they became the de facto ruling government. Were the Christians supposed to bow to them?

Isn’t that what many of our Pastors are teaching? We don’t question the ruling government. Right?

How could that be? Do you really think that God wants us to just sit and wait for the evil forces to come and defeat us?

Our friend Dave Hodges says the the modern interpretation of Romans 13 is not only incorrect but blasphemous:

The modern interpretation of Romans 13 is pure blasphemy. This scripture has been morphed into a doctrine espousing the “Divine Right of Kings” in which God has somehow chosen a king to ruthlessly rule over a people and it is incumbent upon the people to accept their “God-given fate”,  The flock are commanded to “…submit himself to the governing authorities, for there is no authority except that which God has established.”  This false interpretation is nothing but a divine coronation of a ruthless, self-serving government and Christians are expected to capitulate and honor the same kind of thievery, lawlessness and murder which inspired Jesus to expel the money changers from the Temple.

As I contemplate what many of the churches will be like as they embrace a perverted interpretation of Romans 13, I am left wondering what kind of God would condone the horrific abuses being perpetrated by the Obama administration? What kind of God would command its religious leaders to simply ignore the American Holocaust which has witnessed the murder of over 50 million American babies, since Roe v. Wade, in 1973? What kind of God would not have its clergy and its followers fail to condemn the bankster controlled wars of American imperialism which have resulted in the unnecessary deaths of millions of human beings? What kind of God would fail to command his clergy to not speak out and to condemn the actions of the criminal money changers on Wall Street, who are inspired only by the love of money as they continue their heinous assaults upon humanity in the form of unlabeled poisonous GMO’s, the theft of solvent home mortgages by the mega banks, and the secret detentions and the murder of American citizens under the NDAA. What kind of God would order his followers to remain silent as the bankster controlled government plans to commence a world war starting with Ukraine, Syria and Iran in order to support the preservation of the Petrodollar which will result in the potential death of billions of human beings?

In actuality, no God of the Bible would ever command his followers to both enable and to serve the evil which permeates our government. For any church that encourages complete obedience to a corrupt government has taken a big step towards accepting the Mark of the Beast. This is a very dangerous precedent, and this could potentially imperil the salvation of millions if Christians allowing this false doctrine to expand across our nation’s churches.

This is where I go back to that “inner sense” that I believe Christians have. Do you really believe that your Pastor has your best interest at heart when he tells you to basically shut your mouth and pay your taxes?

Is that what the God of the Bible would command of you?

Or would He command you to be fearless in the face of your oppressors?

Dave also talks about Romans 13 in his article entitled, What if God Was One of Us?

Does God ever tell us to fight back against evil? In today’s modern world, if God were one of us, what would he command us to do about the New World Order? In John 2:15 we witness that God violently drove the government sponsored banksters from the Temple.

“So he made a whip out of cords, and drove all from the temple courts, both sheep and cattle; he scattered the coins of the money changers and overturned their tables”.

When the false prophet preacher tells us to submit to the authority of the government under Romans 13, he never explains to us if all governments are ordained by God, why do they fight each other? When it comes to submitting or opposing the New World Order, choose John 2:15 over Romans 13:1-7.

I had a conversation just last week, on this very subject, with Tim Brown of Freedom Outpost. Up until recently I was trying to get the John 2:15 passage in my head and forget about Romans 13. But that is not the way we need to process things. The Bible, like the Constitution, is not a Chinese buffet. We can not pick and choose what we like and leave what we do not.

Upon Tim’s suggestion I started looking for and praying for answers.

Then God sent me a message through a friend. I took the time to sit down and listen to our good friend Bradlee Dean. This video is nearly two years old but I had never taken the time to watch it and honestly don’t ever recall coming across it before yesterday. Now I feel I have a better understanding of Romans 13, and my guess is that you will too if you are willing to spare 13 minutes of your day.

Now we are getting to the truth.

I will admit it. I am one of those people who Bradlee talks about. It is not really that I didn’t know how to properly read and digest these passages. It is not that my inner voice wasn’t talking to me and telling me that I was listening to false prophets. I was simply too scared to look at the truthful and rightful interpretation.

I didn’t want to see it.

I have fears and those fears were getting the best of me.

My fears made me quiver and hide while I listened to false teachers who told me that it was OK to sit by idly while my government tyrannically enslaved its people.

It was never OK.

The God of the Bible commands me to fight these tyrants. These despots are not anointed by God. They do not have His blessing.

They are actively trying to destroy that which is His and that which belongs to His people. They are products of evil and thus under the power of Satan. My God would never have me bow to Satan.

The truth of Romans 13 is that we are not to submit to the evils of this earth. We are in fact commanded to oppose them with all of our Christian might.

The courage to stand strong is within you, and it is within me as well. God will not give us more than we can handle. But I think He would prefer that we start handling it.

You can only turn the other cheek for so long my friend. There comes a time when you must have faith in the fight, faith in God above, and do what is right.