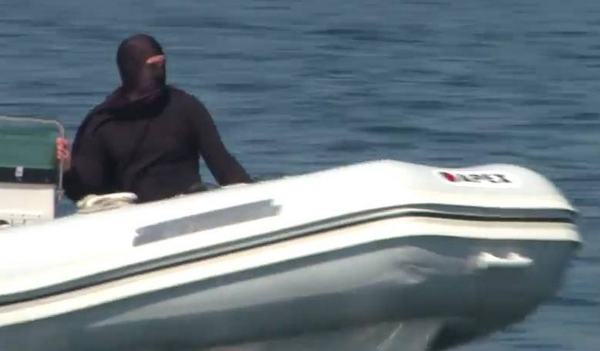 The annual pre-9/11 hype is getting a little out of control. The problem with these stories, in this author’s opinion, is that they provide would be terrorists with too many ideas and options. I feel the same about many TV crime dramas. There is nothing like supplying the bad guys with lots of good ideas. Nevertheless, some stories are of legitimate concern and need to be reported. James O’Keefe of Project Veritas released a video yesterday showing how insecure our NORTHERN Border is.

But there are other concerns with border security. Just as James O’Keefe demonstrated with the Southern Border, when he literally walked across dressed as Osama Bin Laden, he has now exposed how easily we can be breached from the North by a would be terrorist.

O’Keefe successfully brought a man dressed as an ISIS militant into America by boat. He was carrying fake ricin and stolen Ebola. The fake terrorist arrived in Cleveland and walked right into the Rock and Roll Hall of Fame with not one authority or citizen questioning him.

This is how easily it could happen.

O’Keefe rightly points out that Canada is a concern because of the ease of entry by U.K. citizens. If you have been following the news you don’t have to look back very far to find terrorist acts of U.K. jihadists. Last week an 85-year-old woman was beheaded in her garden and, of course, the ISIS member who beheaded both American journalists is suspected to be British.