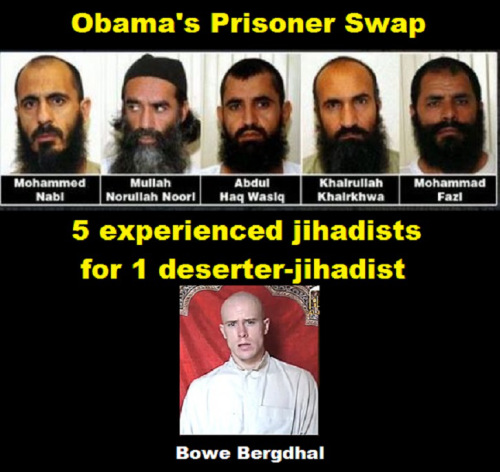 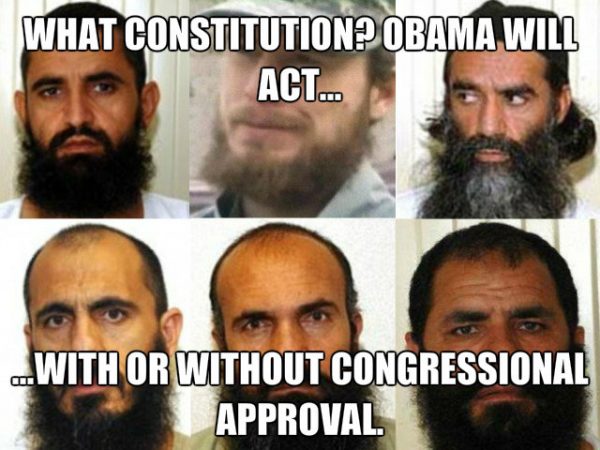 On Tuesday, in what can only be expressed as a dereliction of duty, the House of Representatives voted formally to censure Barack Obama for releasing five top Taliban jihadists for American deserter Bowe Bergdahl. The 249-163 vote follows after a political maneuver of a lawsuit against Obama for not following the law.

The House voted Tuesday to formally condemn President Obama for releasing five Taliban warriors earlier this year in an exchange for Army Sgt. Bowe Bergdahl, with nearly two dozen Democrats joining Republicans in declaring the president broke the law by not giving Congress a heads-up.

Under two defense policy laws, Mr. Obama is required to give 30 days’ notice before releasing suspected terrorist detainees held at Guantanamo Bay, but he gave no notice before making the swap that sent the Taliban warriors to Qatar.

While expressing “relief” that Sgt. Bergdahl was returned to the U.S., the House resolution said releasing the Taliban creates a security risk, and rebuked Mr. Obama for breaking the law to do it.

“It was a clear-cut decision not to follow the law,” said Rep. Mac Thornberry, Texas Republican, who said the move “undercuts the trust” Congress has that the military and intelligence community will carry out the laws as they are written.

That’s true, but this president hasn’t followed the laws as they are written in a variety of areas. For instance, his own Justice Department wouldn’t enforce the Defense of Marriage Act. That’s law. He stood in the Rose Garden and told Congress and the American people he wouldn’t enforce immigration laws and later said they didn’t make sense. He has used Executive Orders to clamp down on arms, even though Congress has been given no authority to write laws pertaining to arms, thereby giving him no authority to execute such laws. His IRS chief was engaged in the targeting of Americans, Obama’s political enemies, as well as helping terrorists obtain tax-exempt status. His DOJ was running guns illegally across the US/Mexico border. He and his accomplices in Congress have helped aid, fund, train and provide weapons to our enemies. He lied about what happened in Benghazi and about the video. Where is Congress on any of this?

Oh, that’s right, they’re still investigating… Fast and Furious is going on four years, Benghazi on two, Extortion 17 on three, the IRS scandal moving into its second year, and what do they have to show for any of it? So far, no jobs lost, but hey, they passed a piece of paper that says, “Obama, you were a bad, bad boy.” Oh, and they did file a lawsuit which will take longer to deal with than the current contempt of congress lawsuit against current Attorney General Eric Holder.

While many self-professed conservatives are applauding this resolution that condemned Obama for his unlawful act, many of us are wondering when Congress will exercise the actual authority they have in the Constitution of impeachment and begin those proceedings in keeping with the law.

Frankly, I’m sick of hearing about what makes them look good in an election year and desire that they follow the rule of law. Congress’ duty is not to censure and not to file lawsuits. Their duty is to impeach the president (even a usurping one) for the following under Article II, Section 4 of the US Constitution:

“The President, Vice President and all civil Officers of the United States, shall be removed from Office on Impeachment for, and Conviction of, Treason, Bribery, or other High crimes and Misdemeanors.”

Misdemeanors are lower infractions of the law. In fact, Webster’s 1828 defines misdemeanor as:

In law, an offense of a less atrocious nature than a crime. Crimes and misdemeanors are mere synonymous terms; but in common usage, the word crime is made to denote offenses of a deeper and more atrocious dye, while small faults and omissions of less consequence are comprised under the gentler name of misdemeanors.

Barack Hussein Obama is guilty of far more than mere misdemeanors. He has aided and abetted the enemies of the United States. He is guilty of treason, as I have laid out the case here, simply based on his involvement and support of the Muslim Brotherhood. Yet, elected officials are either so corrupt or so compromised (or both), that they are unwilling to follow the law and hold this man accountable according to the law (the Constitution).

Rep. Adam Smith, the ranking Democrat on the House Armed Services Committee, said, “This president has only done what every other president before him did,” he said. “This resolution is unprecedented and I think once again shows this body has become more partisan than principled.”

Did you catch that? That’s corruption talking people. So what if other presidents did it? That doesn’t make it right. It merely makes the point that it is an act worth punishing, not censuring. Right, a piece of paper is unprecedented. I feel better. Don’t you?

The fact that there are 163 people who didn’t even vote to censure the guy is telling as to how corrupt the body of the House has become. Again, I’m for the Constitutional remedy, but my goodness, 163 people couldn’t even bring themselves to censure Obama over his lawless act, and yes, it was lawless.

Obama ignored his duty in this matter just like he ignored his duty in going into Libya. Congress has demonstrated it will not exercise its bite, but instead will bark louder in hopes that their supporters will find their barking satisfying. Sadly, for many in America, they prefer barking to biting and will continue to put the same barking dogs back in office in November rather than do what is right and get someone who adheres to the law and will bring justice to bear on the criminal in the White House.