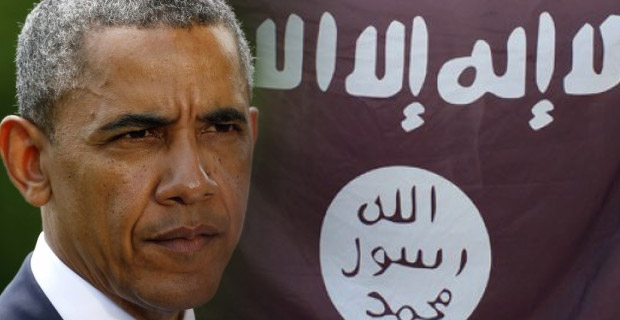 Assad government to consider any military action an act of war

President Barack Obama is set to ignore Congress once again by launching military strikes inside Syria without consulting lawmakers, a move that threatens to enflame the entire region given that the Assad government has repeatedly insisted it will consider any military activity inside Syrian territory as an act of war.

“President Obama is prepared to use U.S. military airstrikes in Syria as part of an expanded campaign to defeat the Islamic State and does not believe he needs formal congressional approval to take that action, according to people who have spoken with the president in recent days,”reports the Washington Post.

Obama is set to deliver a prime time speech tonight during which he will make the case for U.S. air strikes inside Syria in the name of targeting ISIS militants.

In citing ISIS, which was armed and funded by the United States’ biggest allies in the region, as a justification for a military campaign inside Syria, Obama is set to accomplish what the administration failed to achieve last year after the chemical weapons attack in Ghouta was blamed on the Assad government, despite a subsequent MIT report which concluded the incident was more likely the work of US-backed rebels.

Despite many calling for Washington to renew its support for so-called “moderate” rebels in Syria in the name of combating ISIS, it recently emerged that murdered journalist Steven Sotloff was sold to ISIS by FSA militants. In addition, arms given to FSA rebels that originated from the U.S. and Saudi Arabia were later seized by ISIS fighters.

During a recent appearance on Fox News, General Thomas McInerney also revealed how the United States inadvertently bolstered ISIS as a result of the terrorist group obtaining weapons from the U.S. consulate in Benghazi. A more direct method of support involved the U.S. training militants at a secret base in Jordan who later went on to become ISIS fighters in Syria.

Obama’s decision to launch air strikes inside Syrian territory without congressional approval echoes his 2011 assault on Libya, which again was a move to support radical jihadists that ended up with the African country turning into a failed state.

At the time, Obama brazenly undermined the power of Congress by insisting his authority came from the United Nations Security Council prior to the attack on Libya and that Congressional approval was not necessary. “I don’t even have to get to the Constitutional question,” scoffed the President.

According to Congressman Walter Jones, this was an act that constituted “an impeachable high crime and misdemeanor under article II, section 4 of the Constitution.”

Obama’s move to strike inside Syria in the name of fighting ISIS militants which his administration helped boost as a result of its disastrous policy to arm so-called “moderate” rebels threatens to spark a regional war given that the Assad government has repeatedly insisted that any military action within Syrian territory will be considered an act of war.

The global resistance to a U.S. attack on Syria, which successfully derailed last year’s seemingly inevitable assault, has largely evaporated in light of the western media’s ceaseless promotion of ISIS as a catastrophic threat.

As an MSNBC poll showed last night, anti-war fervor amongst liberals has all but disintegrated, with just 12% calling on Obama to get permission from Congress before launching an attack on ISIS inside Syria.