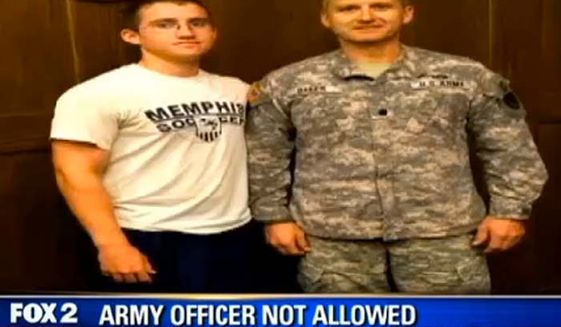 Is this happening? Days before 9/11? Our finest men and women, our best and brightest, who defend our freedom and individual rights, who protect the homeland, are shunned, banned from …… public school.

We. Are. Done. Unless there is a some kind of revolution to overthrow the haters.

Whoever enforced this treasonous ban should be fired immediately, and school parents should march on this school in Michigan. I would go to such a protest, and urge my readers to go as well.

A U.S. Army officer from Rochester, Michigan, was denied entry into his daughter’s high school by four members of its security staff, told that his uniform might “offend” some students.

“Before he was allowed in, the security guard stopped him and said sorry you’re not allowed in the school. Security told him men and women in uniform weren’t allowed because it may offend another student,” Lt. Col. Sherwood Baker’s wife, Rachel, told a local Fox affiliate.

Col. Baker was was on his way to see his daughter’s counselor regarding her class schedule when the incident occurred.

“I can’t even believe they would think like that after all [soldiers] do for our country,” Jim Reynolds, a local resident, told the station.

Rochester Schools Superintendent Robert Shaner, who is also a veteran, sent a letter to the Fox affiliate apologizing for incident.