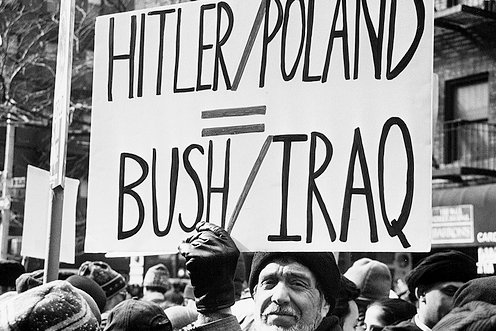 Bringing Nazi comparisons into discussions is usually reserved for internet arguments, not middle school classrooms. But one US teacher may have missed that lesson when she assigned her sixth graders homework comparing Adolf Hitler and George W. Bush.

The students of McKinley Tech Middle School in Washington, DC were working on a unit about war and peace this week, when, as if proving the Godwin’s law, the unnamed teacher handed out a worksheet that related to two of their readings.

“Now that we have read about two men of power who abused their power in various ways, we will compare and contrast them and their actions,” the directions stated. “Please refer to your texts, ‘Fighting Hitler – A Holocaust Story’ and ‘Bush: Iraq War Justified Despite No WMD’ to compare and contrast former President George W. Bush and Hitler.”

DC resident Matt Ashburn, a former restaurateur who is no stranger to the city’s politicians, tweeted about the worksheet.

Here's a 6th grade assignment in DC asking students to compare President Bush to Hitler. This is so wrong. pic.twitter.com/YUfUbIyqkR

No DCPS curriculum says to make these comparisons in any way. A deeply apologetic teacher used poor judgment & will apologize to students.

“No DCPS curriculum materials suggest in any way that teachers should compare the texts in this manner or compare Hitler to any other individual,” DCPS spokesperson Melissa Salmanowitz said in astatement.

“The teacher admits to extremely poor judgment and short sightedness and will apologize to students,”the statement continued. “The school will also send a letter home to families explaining the incident and offering to address any additional questions should they arise.”

The school sent a letter home to parents on Thursday, explaining the incident. Only one of the two texts – the one on Hitler – is part of the current curriculum’s suggested materials, the letter said. The Bush reading was a news article that “is not suggested as part of this year’s curriculum, but was included last year as part of a unit examining the causes and justifications for war.”

McKinley principal Louise Jones did not identify the teacher, but said that educators “have the flexibility to decide the best approach and day-to-day lessons for their students… helping [them] become critical and analytical thinkers.”

Jones apologized for the “extremely poor judgment” exercised by the teacher.

“As such, the assignment reflected extremely poor judgment in this instance and we, as a school community, are very sorry this happened,” she wrote. “Our teacher deeply regrets this mistake as there was no malice intended, no effort made to push any certain political ideology, and any suggestion made to malign the presidency or make any comparison in this offensive way.”

But some parents were not placated by the letter.

“I think trying to compare Adolf Hitler to an American president is just not right,” the parent who initially complained told the Washington Times. “I didn’t agree with Mr. Bush or his policies, but that was over the line.”

One father told WRC that the assignment showed a lack of respect for the office of the president. He noted that the directions said, “both men who abused their powers,” which he said presents opinions as fact.

“I think that anybody who considers that to be an appropriate assignment is irreparably flawed and shouldn’t be teaching,” Marc Thiessen, a former Bush speechwriter from 2004 through the president’s second term, said to the Times. “That’s not political bias, that’s just pure stupidity.”