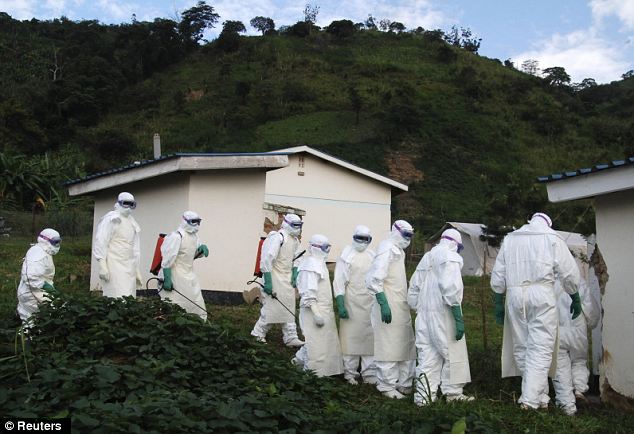 Health experts continue to dispute the question of whether or not the Ebola virus disease could mutate to spread in an airborne manner. These experts are dead wrong and this article will demonstrate that Ebola has breached any hope of containment and the virus is indeed airborne and that these facts have been known for sometime.

This week, the World Health Organization (WHO) issued a stern warning that there may be thousands of new and presently undiagnosed cases of Ebola, each week in Sierra Leone, Guinea and Nigeria, which will surface by early October of 2014. A total of 15 countries could be involved in the outbreak and this could put the lives of 22 million people at risk. These projections by WHO are based on the fact that the present strain of Ebola will remain transmissible through only direct physical contact with bodily fluids and exposure to an infected food supply.

Some of the nation’s top infectious disease experts worry that one of the deadliest viruses on the planet could mutate and be transmitted just by a mere cough or a sneeze. Michael Osterholm, the director of the Center for Infectious Disease Research and Policy a the University of Minnesota, writing for the New York Times stated that “The second possibility is one that virologists are loath to discuss openly but are definitely considering in private: that an Ebola virus could mutate to become transmissible through the air“.

Yesterday, on September 12, 2012, Osterholm  also told CNN that “It’s the single greatest concern I’ve ever had in my 40-year public health career.” Echoing Osterholm, Dr. David Heymann, professor for the London School of Hygiene of Tropical Medicine, said “It is impossible to predict how any virus will mutate”.

Both Osterholm and Heymann note that virologists are extremely hesitant to discuss the possibility of discussing the possibility and potential for Ebola to become an airborne virus because they are scared to death of being professionally discredited and accused of whipping up hysteria with regard to the dangers posed by the present Ebola outbreak. However, in private, they both state, that anyone close to the virus are expressing grave fears about this possibility. In fact, Osterholm specifically stated in the New York Times article that … it’s something they are “definitely considering in private.”

Osterholm is not merely expressing the fear that Ebola will go airborne based upon a knee-jerk emotional response. Osterholm’s observations are based upon his knowledge of the fact that the replication of Ebola has been “notoriously sloppy in replicating”, which greatly increases the chances that  the present form of Ebola can morph into a new strain that is considerably more dangerous and very possibly would become airborne.

The Disturbing Findings of Canadian Researchers

Other researchers have stated that is imperative to better understand  where people come into contact with Ebola-infected animals. As it turns out, the transmission of Ebola through human to human contact with bodily fluids is not the only present means for spreading the virus. For example through hunting or eating the African bush meat , it has been discovered that the virus is likely being spread through this type of contact as well. This is something that the corporate-controlled media is not reporting truthfully as the nature of their reports act as if Ebola cannot be spread from animal to human.

The airborne transmission of Ebola from species to species is already an established scientific fact, despite what is being reported on FOX, CBS, ABC, etc.

Why Isn’t CNN Reporting This?

In 2009, a Canadian research team, from the National Centre for Foreign Animal Disease, Canadian Food Inspection Agency, headed by Carissa Embury-Hyatt, began conducting a research study entitled the Transmission of Ebola virus from pigs to non-human primates. The study determined that “Reston-Ebola was the first Ebola detected in swine with an indicated transmission to humans. In-contact transmission of Zaire-Ebola between pigs was demonstrated experimentally. Here we show Zaire-Ebola transmission from pigs to cynomolgus macaques without direct contact“.  This means that Ebola is already airborne and can jump species! The results of this disturbing study were published in September of 2012. If I can find this Canadian government study, then why can’t CNN?

This study definitely demonstrates that pigs can certainly be a host for Ebola. When humans consume an Ebola-infected pig as a food source, transmission of Ebola is likely. This has profound implications for the containment of Ebola.

Just for the sake of argument, let’s just say that every infected, and potentially infected human could be quarantined for the purpose of preventing transmission of Ebola to other humans. The Canadian research findings tells us that the transmission of Ebola through the food supply renders human quarantining to be a totally useless practice. Nobody could realistically estimate the degree of Ebola transmission amongst the animal population. However, since the Ebola is already airborne, it would be impossible to contain. And certainly the solution to this problem is to not just forego eating ham this Thanksgiving. It is simply too late to contain Ebola! How could we not conclude that Ebola is already airborne?

The Canadian study also mentions that at the time of publication, that they did not have sufficient proof that Ebola would “jump from non-human primates to humans” through airborne means, and that this was not the main focus of the research. However, when we apply the lens of common sense there is an inescapable consequence. If Ebola can be transmitted from pigs to monkeys through the air, then why can’t Ebola be transmitted from human to human in the same manner? And sadly, most researchers are too intimidated to speak about this, much less research the possibility.

The Canadian researchers do not stand alone in their findings regarding transmissibility of Ebola, several researchers have found that Ebola may be present in more animals than previously thought. According to researchers studying Ebola, they have found that “The deadly virus has been detected in chimpanzees, gorillas, fruit bats, monkeys, antelopes, porcupines, rodents, dogs, pigs and humans”.

What do these facts say about the collective wisdom of the CDC and Obama’s administration as they have brought a fourth Ebola patient back into the United States? If Ebola has ANY chance of being airborne, then why would the government bring any infected person into the country?

Dire Implications for the United States When it comes to Ebola, there is an elephant in the room. In fact, there are several elephants in the room. The first elephant has to do with the migration pattern of the present Ebola outbreak. The outbreak is migrating to the East. To prevent world-wide contamination, Ebola would have to be contained in Africa. However, if the eastern migration of Ebola reaches India and its 1.2 billion people, Ebola will spread like a wildfire. The second elephant in the room has to do with the fact that Ebola can be packaged and distributed a bio-terror weapon. And since the United States has a totally open southern border, which literally anyone can cross, this has enormously frightening implications for our people.

They say that bad things come in three’s and in this case, they are correct. The third elephant in the room has to do with the fact that our government is doing absolutely nothing in the form of containment. In the light of the present health crisis, would it not have been prudent to detain illegal immigrants and test them for Ebola? Or, does science mean nothing to this administration? Or, perhaps, are there other motives which transcends the present level of ignorance on display?

By the way, why has the State Department ordered 160,000 HAZMAT suits?