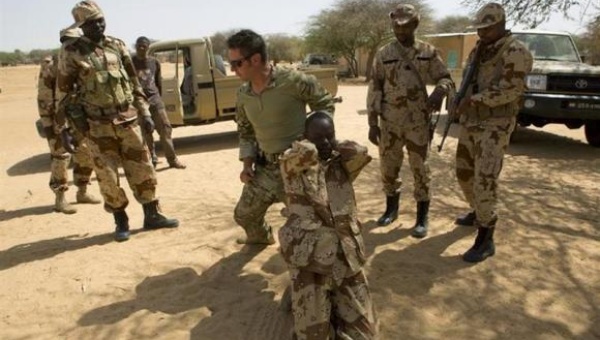 Barack Obama has pledged to send 3,000 troops to West Africa to help fight the Ebola outbreak that is spreading across the continent.

Reports state that the military contingent will be educating health workers and overseeing the building of new treatment centers.

Could this be the catalyst that brings Ebola Zaire to U.S soil? Hundreds of health workers have been sickened and many have died in the current outbreak which started earlier this year. With predictions of tens of thousands more people dying before the outbreak is contained now does not seem a good time to be sending military personnel to the area.

The timing of the announcement could be telling. Mac Slavo published an article just yesterday detailing the State department order for 160,000 hazmat suits. You can read the article here.

Over and over the government have told us that Ebola will not be a problem in the United States, that the chances of an uncontrolled outbreak are next to non-existent, well if that’s the case why have they ordered he suits?

In’s an established fact that every person that comes into the United States from an area where Ebola is running rampant is a risk. Bringing back 3,000 troops could be the catalyst that changes everything.

I know, as you do, that we will be assured that they will be screened and quarantined and all the rest of it, but are there enough facilities to do that?

Will these men and women be afforded the same treatment as Dr Kent Brantly et al should they fall sick?

US officials said the aim of the anti-Ebola initiative is to:

Sierra Leone, Liberia and Guinea are the worst-hit countries in an outbreak that has killed more than 2,400 people. (source)

The officials, speaking on the condition of anonymity to discuss the plans ahead of Obama’s announcement, said the cost of the effort would come from $500 million in overseas contingency operations, such as the war in Afghanistan, that the Pentagon already has asked Congress to redirect to carry out humanitarian efforts in Iraq and in West Africa.

The officials said it would take about two weeks to get U.S. forces on the ground.

Sen. Chris Coons, D-Del., the chairman of the Senate Foreign Relations African affairs subcommittee, applauded the new U.S. commitment. Coons earlier had called for the Obama administration to step up its role in West Africa.

“This humanitarian intervention should serve as a firewall against a global security crisis that has the potential to reach American soil,” he said.

Hardest hit by the outbreak are Liberia, Sierra Leone and Guinea. The virus also has reached Nigeria and Senegal. Ebola is spread through direct contact with the bodily fluids of sick patients, making doctors and nurses especially vulnerable to contracting the virus that has no vaccine or approved treatment.

The U.S. effort will include medics and corpsmen for treatment and training, engineers to help erect the treatment facilities and specialists in logistics to assist in patient transportation.

Obama’s trip to the CDC comes a day after the United States also demanded a stepped-up international response to the outbreak. The U.S. ambassador to the United Nations, Samantha Power, on Monday called for an emergency meeting of the U.N. Security Council on Thursday, warning that the potential risk of the virus could “set the countries of West Africa back a generation.” (continue reading here)

Symptoms of Ebola include:

If Ebola does make it to our shores there are several ways to minimize your chance of getting Ebola:

You can read an excellent article on infectious body disposal here.