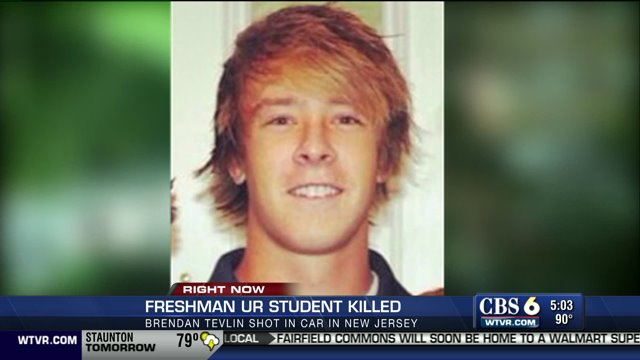 In one of the recent murders almost totally ignored by mainstream media, a 19 year old Roman Catholic named Brendan Tevlin was shot to death by an African American Muslim named Ali Muhammad Brown in New Jersey.

Brendan was a Eucharistic minister in the Catholic Church and also who volunteered playing the bagpipe in funerals. The slaughter of this innocent Catholic was considered by Brown, a “just kill,” and that he was seeking vengeance for what is happening to Muslims in “Iraq, Syria, (and) Afghanistan.”

Brown was driving his jeep, and he just had texted his mother that he was coming home, when he stopped at a red light, Ali shot Brendan 8 times in his jeep. Ali then drove the jeep to an apartment complex where he stole undisclosed items from the Christian martyr.

As part of his jihad, Ali murdered 3 other Americans earlier this year. The Christian humility of Brendan is reflected in what he wrote in his college application:

If the world were to stop spinning at this very moment, could you honestly say you are satisfied with what you have accomplished in your life? I couldn’t […] Most importantly […] I haven’t made the difference that I know that I personally can make.

What’s even more sickening is how the Catholic bishops in America are not intensely informing their congregations that one of their own was murdered by a Muslim heretic in America. They are too busy appeasing homosexuals and Muslims.

When a white police officer kills a black man, people scream racism and want to start a race war before a verdict is even made, but when a black Muslim murders a white Christian, the media does not even want to cover it.

I remember telling people years ago that the African American Islamic movement will be the one doing the dirty work for the Muslims in America. Many of them converted to Islam in prison, and thus they have no problems, nor do they lack the nerves, to kill and commit other crimes against America. They already have the criminal instinct, and now they are applying it for the advancement of their heresy.

The violence done by Muslims in America will be done, to a large extent, by converts to Islam. They are already amongst us. For example a girl in Colorado converted to Islam and was supporting ISIS, as we read from one report:

A 19-year-old suburban Denver woman who federal authorities say intended to wage jihad has pleaded guilty to trying to help the Islamic State militant group in Syria. Shannon Conley pleaded guilty Wednesday in federal court in Denver to one count of conspiracy to provide material support to a foreign terrorist organization. She wore a black and brown headscarf with her striped jail uniform. Authorities say she was arrested at the Denver airport in April as she boarded a flight she hoped would get her to Syria. Documents say Conley told FBI agents that she wanted to use her skills as a nurse’s aide to help the militants. Agents repeatedly tried to discourage her. Authorities say she wanted to marry a man she met online who claimed to be fighting with the Islamic State group.

The Texas law department found a message on Twitter from ISIS, saying

Americans in for ruin (sic).

ISIS wants to cross into the United States through the US-Mexican border. The Texas Department of Public Safety has given this warning:

A review of ISIS social media messaging during the week ending August 26 shows that militants are expressing an increased interest in the notion that they could clandestinely infiltrate the southwest border of US, for terror attack … Social media account holders believed to be ISIS militants and propagandists have called for unspecified border operations, or they have sought to raise awareness that illegal entry through Mexico is a viable option … The identities of persons operating these accounts cannot be independently verified; however the accounts were selected for monitoring based on several indications that they have been used by actual ISIS militants for propaganda purposes and collectively reach tens of thousands of followers… One account was verified as belonging to an individual located in Mosul, Iraq.

Judicial Watch has made this statement:

Agents across a number of Homeland Security, Justice and Defense agencies have all been placed on alert and instructed to aggressively work all possible leads and sources concerning this imminent terrorist threat

According to the Texas law department, some 32 Facebook and Twitter posts by jihadists have been found expressing interest in the US-Mexican border, with even “calls for border infiltration.” ISIS knows that there are a large amount of people crossing into America through Mexico, and plans on using this to their advantage. As the Texas law department reports:

This Twitter account holder, who is the administrator of an ISIS propaganda trading group, stated that the time was right for such an action because “the US-Mexican border is now open large numbers of people crossing”

A man, reportedly in Houston TX, was arrested and he was wearing an ISIS logo. As our colleague, Ben Barrack, just reported:

There isn’t much information on this story but it represents the second report – with photos – of an alleged ISIS fighter / sympathizer in Houston. According to a website called Political Ears,

which links to a Tea Party facebook page, the back of a man wearing body armor is seen in what looks like a police car. The ISIS logo is imprinted on the body armor.

The fact that there is very little information out there about this story may be grounds for healthy skepticism. However, according to the website, the media is ignoring the story and Houston PD isn’t talking. Neither one of those claims seems all that implausible. It’s one thing to report ISIS beheading two Americans and an untold number of Syrians in Syria. It’s quite another to have confirmation that ISIS is operating on American soil.

Last week, another website – Wounded American Warrior – posted a separate photo of a man wearing a black robe with what appears to be an ISIS logo on his back right shoulder.

ISIS recently put up this tweet to the US:

The message, purportedly from ISIS, also included a picture of Old Republic Building, 307 N. Michigan Ave., in Chicago, and in front of it a hand holding a piece of paper on which is written some Arabic writing reading:

ISIS will pass by here

Over the past six years, Chicago has become a top potential target for international terrorists, a top security expert said Friday, making the posting of a veiled threat by Islamic radicals on Twitter a higher cause for concern.

In the meantime, the U.S. government on Friday issued a security bulletin to all U.S. law enforcement in light of the overall threat posed by Islamic State, commonly known as ISIS or ISIL.

The ominous post on Twitter, purportedly from somebody connected with Islamic State, shows a photo of the Old Republic Building, 307 N. Michigan Ave., in Chicago and the White House.

As we have said before, there will be more attacks on the United States worse than 9/11. Be prepared.

Be prepared to see more Christian martyrdoms, instead it won’t be in another country, but right in your own backyard.