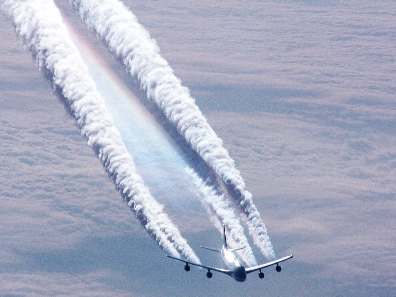 When it comes to chemtrails, I’ve always tried to stay on the fence. It has always been one of those subjects that has attracted reputable researchers, as well as its fair share of crazies; which I suppose you could say about any conspiracy theory. Either way, such a divergent group of supporters tends to muddy the waters, making it very difficult to discern fact from fiction. Hence my less than ardent opinion.

But every now and then a new piece of evidence come to light that makes me rethink the whole issue. Recently a Youtube video was posted, that shows a kind of chemtrail that I’ve never seen before.

As you can see from the video, this isn’t an ordinary contrail. The four streams being emitted from the aircraft are actually overlapping each other. If they were ordinary contrails, or even ordinary chemtrails for that matter, you would expect the streams to be completely parallel to each other, since that’s how plane engines are aligned on the wings of the aircraft. You would expect them to look more like the picture below. 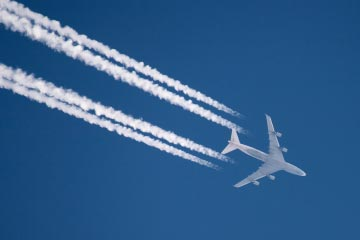 Instead, what you see are those strangely angled trails that collide and entangle each other. I suspect that if the engines of an aircraft were arranged to produce contrails in such a way, I doubt the plane would ever get off the ground.

Another interesting aspect to the footage, is the periodical plumes of mist that are being emitted from the tail of the aircraft. By itself, it doesn’t really prove anything. Most large commercial aircraft contain a tail pipe that could account for this additional contrail. What you might be seeing in the video is the exhaust from the plane’s auxiliary power unit, which is basically an additional engine not used for propulsion. It’s typically used to power the various electronic devices on the aircraft.

What confuses me though, is why the exhaust is being emitted intermittently. Now I’m no expert on aircraft, but I would expect the auxiliary power unit to run continuously, much the same way your car engine continuously runs the alternator. Having it run on and off every few seconds sounds like it wouldn’t power the electronics very well. If anyone reading this has a good explanation for this exhaust pattern, I’d love to hear it in the comments.

Another confusing aspect of the tail smoke, is its color. About halfway through the video, the camera zooms in very close to the aircraft. When the tail begins emitting its “contrail”, it turns into a distinctly different color compared to the trails left behind by the four engines. I’m assuming the tail engine is being fed the same exact fuel as the other engines. So why would it produce a contrail of a different color?

Again, if anyone reading this has more expertise than myself, I would love to hear a good explanation for these effects. Otherwise, this video may be proof positive that our government is engaging in a widespread campaign to manipulate our weather with toxic chemicals and heavy metals. If that’s the case, then the health of our bodies is in serious jeopardy.