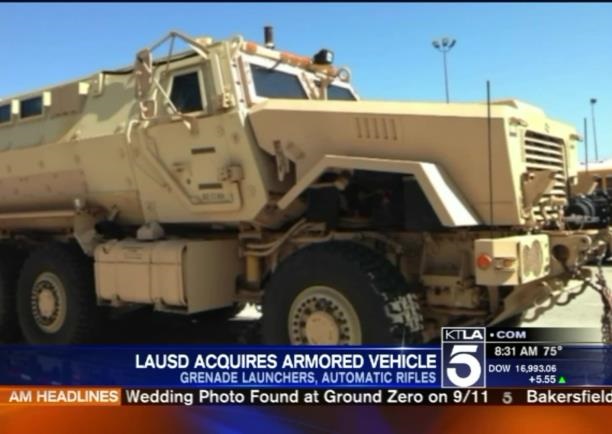 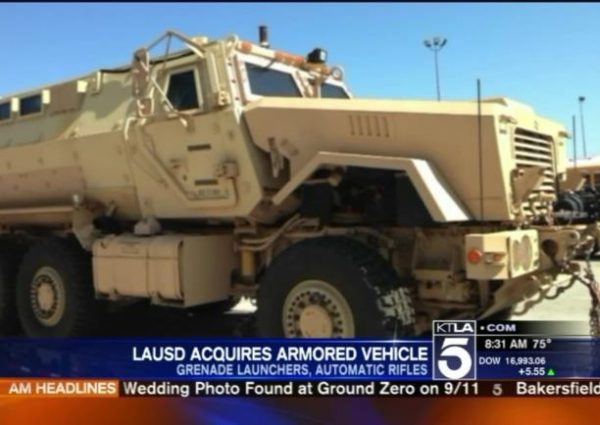 Questions are being asked as to why the Los Angeles School District police needs equipment previously used in Iraq after officials admitted they had acquired a 20-foot-long armored vehicle as well as grenade launchers from the U.S. military.

The 14-ton armored vehicle, which was was formerly used to transport US Marines, was obtained in July and has been stored at a secret facility since it was received from the military at no cost. CBS LA were denied permission to film the vehicle.

LAUSD police Chief Steve Zipperman told CBS LA that the vehicle was needed for “extraordinary circumstances” that involved “life-saving” situations while denying that the equipment was “threatening” or was merely being used as a “show of force.”

However, the mere appearance of the tank-like vehicle is seemingly at odds with the Los Angeles School Police Department’s mission to, “Assist students, teachers, administrators and other staff in providing a safe and tranquil environment.”

Zipperman acknowledged that the grenade launchers, which were obtained after 9/11, were not necessary and would be disposed with, although why that decision took 13 years to make is unknown.

Referring to recent events in Ferguson, Missouri, where militarized police and tactics were used against both demonstrators and journalists, Zipperman remarked, “I can’t allow whatever political ramifications or analysis in Ferguson suggest how I want to make a decision on how to best make sure we respond at the LAUSD.”

The police chief vowed to keep the armored vehicle and said it would only be deployed on his direct orders.

As we have exhaustively documented, many see the growing militarization of domestic police departments as a clear signal that law enforcement increasingly views the American people as a threat.

Last month, former Marine Paul Szoldra warned that scenes in Ferguson illustrated the “terrifying” result of the militarization of police, with the American people now being treated like insurgents in Afghanistan and Iraq.

Martino was speaking at a council meeting concerning a decision to purchase a BearCat armored vehicle. The purchase of the vehicle was mired in controversy after the city’s Police Chief wrote in an application filing to the DHS that the vehicle was needed to deal with the “threat” posed by libertarians, sovereign citizen adherents, and Occupy activists in the region.