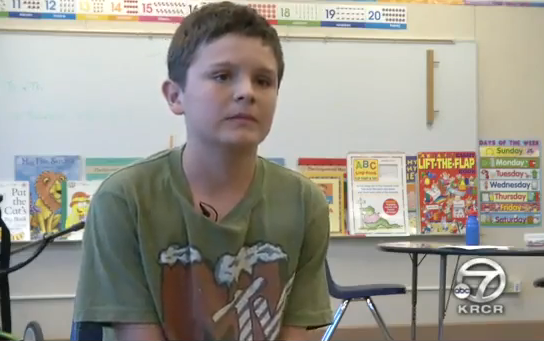 Here we have a school that has a policy, not with safety in mind – only as an afterthought – but one that hinges on strict adherence to said policy. Two students were given two different school-prepared lunches. One of the lunches was obviously inadequate, so the classmate gave of his own plate – and was met with detention.

The problem this writer has with it is the use of zero tolerance force in the lunch room of all places. And when trauma and guilt are inflicted on a student who would otherwise be praised for having a mature character – by acting on the very collectivist principles heavily taught in school – why, this is just too hard to swallow….

Eighth grader Kyle Bradford of Weaverville Elementary School had no idea that breaking bread with a fellow student would cause such an uproar. Were the students gulping from the same milk carton? Were they taking turns playing airplane with hot oatmeal? Were they doing that Lady and the Tramp thing with one long spaghetti noodle? No, Kyle simply let his hungry friend have his chicken burrito – which means the last person to touch it was probably the cafeteria personnel. It stands to reason that there is less risk involved in this proceeding than the daily sharing of the drinking fountain.

Take note: Kyle said his friend couldn’t get a normal lunch and that his own uneaten burrito hot off the lunch line was just going to go in the garbage. But policy is more important. The Superintendent said there were other options. Like this? Please sir – more porridge! It sounds like Kyle’s friend had exhausted his options to receive the paltry cheese sandwich he did. I have never seen where students are allowed to have second helpings especially where free lunches are concerned.

We have a policy that prohibits students from exchanging meals. Of course if students are concerned about other students not having enough to eat we would definitely want to consider that, but because of safety and liability we cannot allow students to actually exchange meals,

Kyle’s mother praised his son’s indiscretion as kindness and didn’t feel the school had any business to discipline him for good manners.

Having worked in the school system, one can understand the extreme and tragic results that could arise if a student is exposed to a food allergen in the lunchroom. And sometimes, a student will prank another with the allergen because they don’t realize the gravity of such actions. But again, we are talking about two school-prepared lunches given to two students by the school. (So for the Superintendent to suddenly claim safety or allergy threat as an afterthought does not explain the use of punishment in this instance.)

Lunchroom workers are not even equipped to deal with this type of emergency if it were to happen or to look for lesser known signs. I didn’t need this study to know that emergency plans for this situation are shoddy at best in the school system. Therefore, it is extra irksome that a school would use such a misguided form of vigilance to punish a student with no ill intent – and do so using no sense of humanity; no common sense.

This is not the first lunchtime ‘food fight’ at a school. In 2012, a student was suspended and interrogated by a cop for bringing a kombucha to drink with his lunch. I wonder if the lab results have come back yet. Likewise, some preschools will only allow home-brought meals if they come with a doctor’s note.

I suppose “share and share alike” is only valid if it is state-sanctioned. But not for 13 year olds and not if you want to feed the homeless. Social Studies be damned!