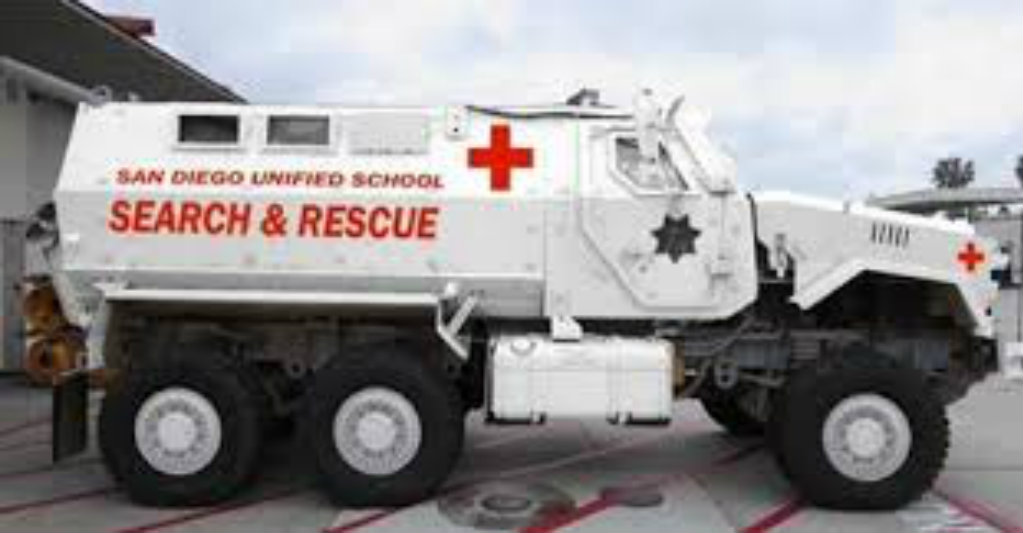 SAN DIEGO, CA- While California schools are known for being rough, it is unlikely that even the toughest of students are establishing choke points and setting up Improvised Explosive Devices (IEDs) to target teachers they don’t like.

The obvious conclusion to draw from San Diego Unified School District’s decision to purchase a Mine-Resistant Ambush-Protected vehicle (MRAP) is that the school’s Chief of Police should be terminated and the district needs its budget cut. There is no legitimate use for this tool in the district’s inventory. If the district has thousands of taxpayer dollars to throw away on a useless vehicle, it obviously has too much money at its disposal. The decision to use the funds in this manner rests with Chief of Police Ruben Littlejohn. He should pay for the improper decision making process with his job.

The excuse given to the public was that the same vehicle used to patrol the streets of Baghdad will be used to store medical supplies and teddy bears. The reader should notice that this is not an article on The Onion.

The Chief seems to believe that the MRAP will roll out whenever a student in the district is injured. This is, of course, a lie to sell the idea of militarizing a school police department to the public. San Diego does have an Emergency Medical Service and school nurses. This is either an outright lie to the public, or the Chief’s plan is to endanger the students by utilizing the least trained person available to deal with traumatic injuries. Most staff members of The Anti-Media are trained in first aid and CPR. Would you prefer we handle an injury to your child or somebody who makes their living saving lives?

The department is militarized and has a policy allowing officers to store AR-15s (a weapon effectively banned for civilian ownership in California) in the trunks of patrol cars on campus. Maybe the policy is only true if the rifles shoot out rainbows and flowers to accompany the teddy bear filled MRAP. This is a school police department that has been militarized.

Perhaps instead of wasting money on militarizing a school police force, the Chief could train his officers to properly investigate teachers molesting students, or at least convince them to file a report when an incident is alleged. When a student alleged statutory rape at the school, the Chief said after a failed cover up by administration officials

“It was handled administratively versus criminally.”

They must have used the same administrative powers the Catholic Church used to cover up sex crimes in their jurisdiction.

Plain and simple: This cop has got to go.