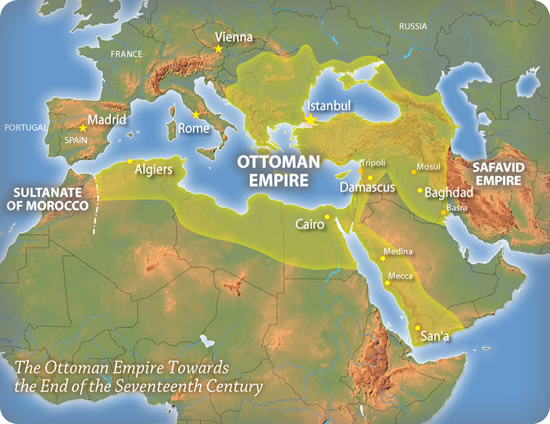 The battle took place at Kahlenberg Mountain near Vienna, and marked the beginning of the political hegemony of the Habsburg dynasty in the Holy Roman Empire and Central Europe.

The siege itself began on July 14, 1683, by the Ottoman army of approximately 300,000 men, and the battle was won by the combined forces of the Holy Roman Empire of the German Nation. The alliance fought the army of the Ottoman Empire and those of Ottoman fiefdoms commanded by Grand Vizier Merzifonlu Kara Mustafa Pasha.

It has been suggested by many historians that this battle marked the turning-point in the Ottoman–Habsburg wars, the over 300-year struggle between the Holy Roman Empire and the Ottoman Empire.

“The spread of Islam was military. There is a tendency to apologize for this and we should not. It is one of the injunctions of the Qur’an that you must fight for the spreading of Islam.” — Dr. Ali Issa Othman, Islamic Scholar, as quoted in the book The Muslim Mind by Chris Waddy, (New York, NY: Longman Publishers, 1970) p. 100.

“Islam is the enemy of science, of freethinking, of reason and of human rights. It acts as a powerful break on the advancement of civilization.” — Dr. Ali Sina, Iranian former Muslim, in his review of Why I Am Not A Muslim.

We have all researched the events surrounding the attacks of September 11, 2001, mostly out of a well-deserved distrust for the blatant scientific fallacies and contradictions in the 9/11 Commission Report, and due to the extremely questionable nature of the botched investigation and ensuing cover-up. We’re not going to go into all of that here, because it has been researched and discussed and analyzed and disseminated ad-nauseam for the last 13 years.

What I want to focus on in this particular blog is the fact that the attacks were perpetrated—at least officially—by 19 men affiliated with al-Qaeda, 15 of the 19 being citizens of Saudi Arabia and others from the United Arab Emirates, Egypt and Lebanon. Nearly 3,000 American citizens were killed in that attack, and innumerable deaths have occurred since then due to extenuating injuries and medical complications. A recent report cites that, “Currently, over 30,000 responders and survivors are sick and receiving critical treatment and medical care through the federal World Trade Center Health Program. Over 60,000 responders to 9/11 are receiving medical monitoring.”

Islamic militants were also involved in the attack on the American diplomatic compound in Benghazi, Libya, two years ago on September 11, 2012, eleven years after the attacks of 2001. Despite the reasons you believe it was carried out, which we have all looked into closely, this attack resulted in the killing of U.S. Ambassador J. Christopher Stevens, U.S. Foreign Service Information Management Officer Sean Smith, and two CIA contractors, Tyrone S. Woods and Glen Doherty, by Muslims.

You see, they are trying to atone for the massive defeat in 1683. They have been bitter about it ever since.

The Qur’an contains at least 109 verses that calls Muslims to war with non-believers for the sake of Islamic rule. Some of the passages are quite graphic, with commands to chop off heads and fingers and kill “infidels” wherever they may be hiding. Muslims who do not join the fight are called “hypocrites” and are warned that Allah will send them to Hell if they do not join the slaughter.

Here is just a small sampling, all verses translated from the online Noble Qur’an, all comments in brackets are this author’s own and are for further clarification:

“Soon shall We cast terror into the hearts of the Unbelievers, for that they joined companions with Allah, for which He had sent no authority.” — Qur’an (3:151)

“I will cast terror into the hearts of those who disbelieve. Therefore strike off their heads and strike off every fingertip of them.” — Qur’an (8:12)

“And kill them wherever you find them, and turn them out from where they have turned you out. And Al-Fitnah [disbelief] is worse than killing . . . but if they desist, then lo! Allah is forgiving and merciful. And fight them until there is no more Fitnah [disbelief and worshipping of others along with Allah] and worship is for Allah alone. But if they cease, let there be no transgression except against Az-Zalimun [the polytheists, and wrong-doers].” — Qur’an (2:191-193)

“The punishment of those who wage war against Allah and His messenger and strive to make mischief in the land is only this, that they should be murdered or crucified or their hands and their feet should be cut off on opposite sides or they should be imprisoned; this shall be as a disgrace for them in this world, and in the hereafter they shall have a grievous chastisement.” — Qur’an (5:33)

“O Prophet! Strive against the disbelievers and the hypocrites, and be stern with them. Hell will be their home, a hapless journey’s end.” — Qur’an (66:9) [The Arabic word interpreted as “striving” in this verse is the same root as “Jihad.” The context is clearly a holy war, and the scope of violence is broadened to include “hypocrites,” those who call themselves Muslims but do not act as such.]

The underlying fact in all of this is that the Islamic State of Iraq and Syria (ISIS) and the Islamic State of Iraq and the Levant (ISIL)—by whatever name they choose to refer to themselves—are clearly the true Muslims who are carrying out the commands of their prophet Mohammed and their god Allah to the letter. With that said, all Muslims who are not casting terror into the hearts of the unbelievers, imprisoning, chastising, dismembering, decapitating, crucifying and murdering people who don’t believe what they believe, are essentially backslidden Muslims. They are the hypocrites described in the Qur’an.

“Westerners do not understand that when it comes to the Muslim world, even the most ‘moderate’ of Muslims, if they are religious, all believe in the coming of the Mahdi and the establishment of the Caliphate to rule the entire Globe by changing world laws to adapt the Islamic Sharia. The coming of the Mahdi to religious Muslims is as holy of a belief as the coming of Messiah is to Christians and Jews.” ― Walid Shoebat, former member of the Muslim Brotherhood, in his book God’s War on Terror: Islam, Prophecy and the Bible, (Top Executive Media, July 21, 2008). Visit his website to learn more about the true nature of Islam: www.shoebat.com

The Muslim faith is not a religion of peace. The word “Islam” in Arabic “أسلام” literally translates to: “absolute voluntary submission.” That is why President Barack Hussein Obama has bowed in submission to Saudi King Abdullah eight times.

I don’t really want to go into detail about the cruel and barbaric slaughter and genocide of Christians in the Middle East at the hands of Islamic militants. One can only take so much demonically-charged bloodshed into their spirit before becoming worn-down and weary. Truthfully, this new holocaust against the followers of the Nazarene has super-charged my prayer life and compelled me to seek after the Almighty with new fervency.

We should all be seeking after the one true Holy God of the universe, because the enemy comes only to kill, steal and destroy. Islam is satanic. It is born upon the foundation of a lie. It is leading over a billion people into deception and eternal judgment. It is more than a religion―it is an entire way of life, and us believers who carry the burden of the Christian cross and are under the banner of God’s law, need to live out our faith with the same or greater fervency, lest we be considered hypocrites at the judgment seat of our Heavenly Father. Much is expected of us.

Worth considering, though, is that over two millenia ago the Hebrew prophets Jeremiah and Ezekiel both issued parallel prophecies regarding the destruction of the rogue Islamic nation in the last days.

September 11, 2001 marked the beginning of judgment for America, who has sinned greatly and adopted all the abominations of the wicked nations of the ancients. Throughout academic, cultural and Biblical history, there is very credible evidence that God has always sent evil kings, men and armies to judge His people when they forsook Him and forgot His commandments. If we don’t turn back to Him, then our people will go into captivity.

God does not desire that we suffer, but as any good parent who loves his children, He will discipline us if we don’t humble ourselves and correct our ways. After all, our rights and liberties come from God, and were given us to worship Him in freedom. However, if we don’t deserve freedom any longer, then it will be taken from us by the divine judgment of foreign usurping armies. For as Revelation 17:17 warns, “God has put it in their hearts to fulfil His will.”

“The only goal of Islam is victory over the whole world.” ― Walid Shoebat, ibid.