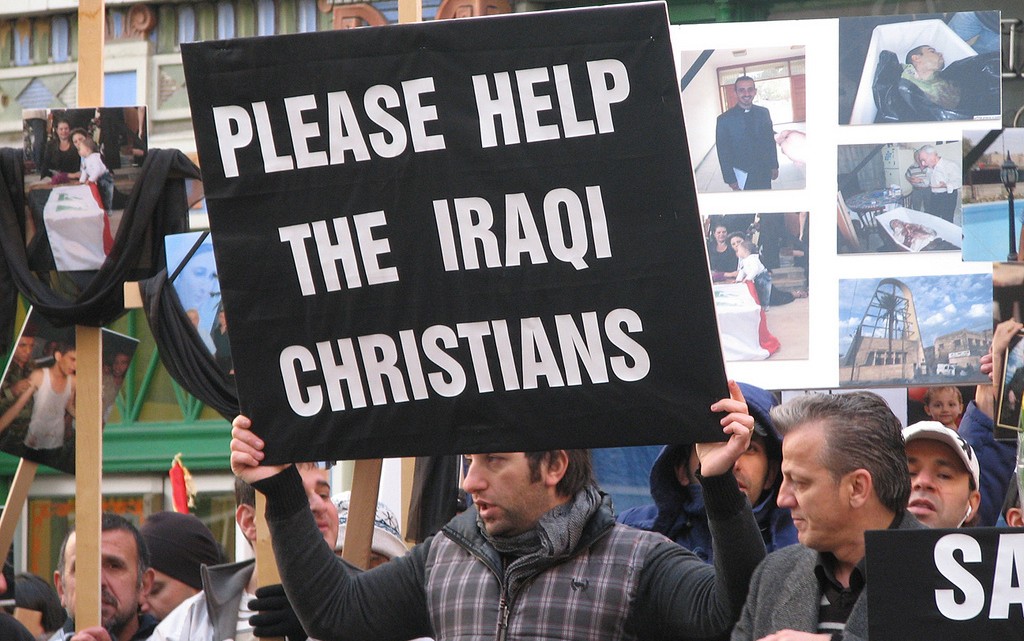 The average American is so dumbed down by the propaganda of corporate, state-controlled media that they have no clue what is really happening in Iraq. For instance, how many people truly believe that we are involved in Iraq to stop the genocide of Christians and other religious minorities? Believe what you will but we committed nothing to Iraq until the Islamic State started getting dangerously close to American oil interests in Erbil and that is an indisputable fact.

Any American involvement in Iraq should not be seen as a “feel good” or “do good” story but rather as an extension of our permanent foreign policy that does not change when a new occupant enters the White House. It is simply a case of “same sh**/different day.” That is the truth. Our involvement is not about helping Iraqis, it is about our own corporate interests. How’s that “hope and change” working out for ya?

When Christians, Yazidis and other minorities were raped, mutilated, slaughtered and driven from their homes the United States did nothing. In fact, even the fleeing refugees received no help from our country. They were welcomed in France while we offered no asylum.

So would it now surprise you if Iraqi Christians are no longer allowed to attend school in some areas? And if they are allowed to attend at all it is certainly not education they will be afforded, but rather Islamic State indoctrination that awaits.

Ankawa (AsiaNews) – For the first time in history, Iraqi Christians who always had a “high standard of education” in the region, are being deprived of the right to study and cannot attend schools. This represents a further threat to the survival of the minority, not only in Iraq but throughout the Middle East, because there is not the risk that an entire generation “will not be educated”, which is a “very bad sign”.  The warning  comes from Msgr. Shimoun Emil Nona, Chaldean Archbishop of Mosul, in the north, the second most important city in the country and first city to fall into the hands of the militia of the Islamic State.

Interviewed by AsiaNews, the prelate confirms that “currently children from many of the refugee families” as well as “children who live in Christian areas” cannot start the school year. “There are about 700 schools scattered between Erbil, Ankawa and Zakkho – he explains – but they are hosting displaced people and are full. In other non-Christian areas  the lessons have begun, but not here”. Moreover in the areas occupied by the Islamic Caliphate  the curriculum has been changed to promote Islam and the Koran.

Msgr. Nona was the first to raise the alarm of the danger posed by the advance of the Islamists after the conquest of Mosul, where about 500 thousand people – Muslims and Christians – fled in early June to avoid being forced to convert to Islam.  It was also where the militants founded their caliphate and imposed sharia. In cities and in areas on the Nineveh plain that are under the control of the Islamic State schools have reopened. However, under the instruction of their leader the curriculum has changed to ban history, geography and literature; students must study Arabic and the Muslim religion and are forbidden to speak of the Republic of Iraq or Syria, only of the Caliphate.

An Mosul elementary school teacher of mathematics and Arabic states that “we are in 2014, but it seems have regressed 14 centuries.” 95% of the 2,450 schools in the area – Mosul and Nineveh Plain – are in the hands of the Islamists, who have forbidden mixed classes and have closed the Faculty of Law, because “conventional law is no longer in force.” Rigid rules, imposed by force, are increasingly arousing the impatience of the local population. If at first people saw them as liberators from a central government (under former Shiite Prime Minister al-Maliki) regarded as the oppressor, today 98% of the people – as reported by an academic in Mosul – “would like to see them gone as soon as possible” .

Isn’t that special? If the kids are allowed near a school at all it will be for the purpose of typical Islamic brainwashing and forced conversion.

Don’t look for Obama and company to rush to try to fix this situation. The mainstream news media will likely not report it and, even if they do, very few will care.

Christianity is persecuted in America as well. Though we don’t deprive Christian children of their right to be educated, America as a nation has turned its back on God and trying to stand up for Christian values in America is not much easier than it is in Islamic State held territory.

Though you may get to keep your head here, that head doesn’t do a lot of good when it is not allowed to think in productive ways.

God save these poor children. I am afraid that no help is coming from America.