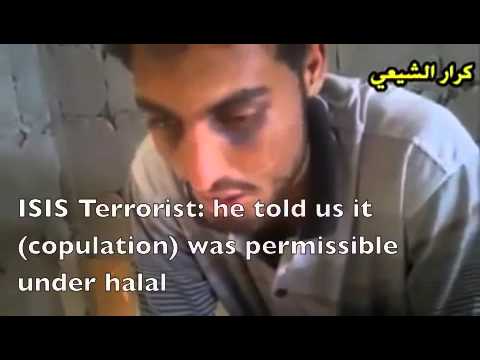 In one interrogation by Iraqi officials of an ISIS terrorist who carried out seven beheadings. The terrorist not only confesses the gruesome beheadings he carried out, but also confesses the dark side which is virtually unknown regarding sadistic homosexual group “marriages” and rituals. In this incredible story, Shoebat.com translates the short testimony of one of eleven recruits who were sodomized by the ISIS “prince” Abu Ala’.

Abu Ala’ made a fatwa permitting himself to marry and sodomize his recruits, with the exception that no man can sodomize him.

ISIS is truly the manifestation of the purest form of the homosexual agenda: sodomizing men as both torture and pleasure, and killing those who disagree with them.

The incredible testimony confirms a documentary broadcasted on August 27th on the Kurdish station STERK TV, it was said that ISIS has been raping men in a ceremony it describes as “marriage” and records them to use as blackmail and force them to join.

ISIS uses rape, including gang rape, as a tactic of fear to intimidate populations it seeks to control, according to an August 28th report by the Firat News Agency, a Kurdish agency based in Amsterdam.

The STERK TV documentary records the confessions of more than 20 ISIS fighters who were captured by Kurdish fighters in Syria and includes horrific footage of ISIS crimes:

The ISIL elements admitted that what they called ‘marriage’ was in fact rape. They said that every new member of the group was raped. The footage of the rape would be used as blackmail in the event of the new recruit refusing to participate in actions.

In the documentary, ISIS fighter Abdul Kareem Ibrahim Bazo said he had been blindfolded and raped:

About a fortnight later they came and said I had to join. I did not want to. But they had the footage. They threatened to show it to my family.

Ferhan Salim Unuf Safen, 20, described how he had been abducted and raped by “six or seven” ISIS fighters and was ashamed to explain the things they had done to him:

I fainted. When I came round they told me: ‘you are now with ISIL’

Ahmed Hussain also described on camera how he had been abducted, drugged, tortured, forced into a “marriage” ceremony, and gang raped by ISIS elements:

They “married” me 15 times. Then they washed my head and put cologne on me. They told me no one could join ISIL without being married.

What is being done to victims is a means “to assassinate them while they are still alive”, he said, stressing the need for the psychological treatment of victims.

Cairo University graduate student Rasem al-Hilali, an Iraqi national, said Iraqis “used to dream of getting rid of the injustice, tyranny, oppression and crime, under which they suffered for decades”.

“Now they are suffering even more under the rule of ISIL,” he told Mawtani.

*Theodore Shoebat contributed to this article.